Hello everyone. I'm new to the forum. I did my research on which bird would be best for me and fell in love with green cheeks and am planning to buy a new this week. so went to this so-called aviary who was more of a bird breeder who doesn't like to be called so. he showed me 4 green cheek conures that were not tamed at all! and then he showed me a 4 week old yellow-sided conure that was kept in an incubator (or whatever its called) along with 4 african grey babies. he told me i can buy it right away or i can get the four other green cheeks ( they were terrified of everything and didn't know how to fly...yet they were kept in a huge cage with baby cockatiels).

ok you all are wondering what is my question?

If you did'nt know before... I live in India and birds are not treated like companions and are sold by traders n breeders. The 'aviary' is still way humane compared to other bird breeders ( rather bird traders) and really loves the birds, but I'm not sure he really knows what he is doing. also i think he is forcing the weaning process to stop early. idk im deeply conflicted.

I really like the yellow sided baby and his parents are friendly too (and very beautiful) but if i get him ill have to hand feed him...even though the guy says he'll teach me i dont want my gcc to hate me or get some problems or die! im reluctant to get one from a breeder cuz they keep em in small cages and feed em only seeds...i don't want that traumatic baggage.
( i've rescued a cockatiel and other birds so i know how messed up they can get and how it gets to work with em).
thanks. so basically...what should i do?

Are there any you could rescue or get as a rehome (adult)?

I would not rush into any decision. Find a bird and situation you feel good about.

there are no rescues here... I have looked. I contacted another breeder.
how can I sure the birds have not gone through trauma or separation anxiety...how can I say they are perfectly healthy and well treated.
can u tell what age these would be?
Plus- I can't be very picky cuz these two are the only breeders that keep well-rounded ( healthy and all) conures. 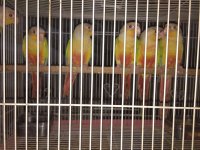 Welcome to the forum! They're so cute! I don't know what age conures wean but 4 weeks is really young. I would think they all would still need to be hand fed....

Karen would have better input but four weeks is too young to wean.

These pictures were sent by the second breeder. I will go there today, he says they have weaned and must be 2months old. They look cute though! @sunnysmom.
If I pick one or a pair from him, can I just randomly pick any two I like? Also, how will I know that they have weaned ( I mean I'll know once I get home) are there any telltale signs?
I know I'm asking stupid questions, but I just want to be sure. I've never had a conure as a pet. and here is a new pic. 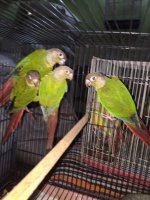 I don't really have experience with young birds. I'm sure others here can answer better than me. I know with cockatiels, they typically wean at 8-10 weeks. So I would guess conures are about the same. Sometimes young birds will regress with the stress of going to a new home and need some hand feedings again. So it's a good idea to make sure they're eating, keep an eye on their weight, etc. Perhaps if you actually see them eating while you're there? They're really cute too.

if they are fully weaned off, the birds should be able to eating solid foods seeds/pellets/fruit/veg.

Looking At Average Bird Weights And Body Condition of Birds

Do you have the option of putting a deposit on the 4 week old and bringing it home when it's a little older?

It sounds/looks like the other babies might not have been handfed, although I would ask the breeder of course. The ones in the pic from the second breeder look pretty shy but maybe the camera scared them. Two months is about when greencheeks normally begin to wean. Parent-raised babies usually wean a little bit earlier than handfed babies.

I have to admit, that despite the risks of handfeeding, I would be tempted by the 4 week old if I was in your situation. It sounds like you are aware of the care they need and could give him a better start than a breeder that doesn't seem to really care and might force wean the baby. But, only if you have the time and can get the extra equipment you would need - most importantly, a good thermometer. And only with lessons from the breeder and (hopefully) some advice from a vet as well.
*****

I got a male yellow-sided green cheek. I'm guessing he is 2-6 months but, I have no idea..any guesses? I'll leave him for 3-4 days to get accustomed to me and his new home. any tips? especially feeding guide.
any fun names?

Congratulations! He's very cute. I would spend time sitting with him and talking to him. Is he hand tame at all?

@sunnysmom Can i start talking to him from day one? Or should I wait for a few days...let him settle in?
he's been handfed BUT the breeder manhandles them so he is not tamed at all.
Last edited: 2/15/18

Hriday_the19th said:
@sunnysmom Can i start talking to him from day one? Or should I wait for a few days...let him settle in?
he's been handfed BUT the breeder manhandles them so he is not tamed at all.
Click to expand...

I would sit with him and see how he reacts. I think it's a good idea to wait to handle him until he settles in more but getting him used to being around you is okay. He may even like the company. A lot just depends on the bird. I would sit and read magazine articles to my cockatiel when we first got him as silly as that sounds. It helped him get used to me and my voice in a nonthreatening way. My cockatoo on the other hand was ready to play and snuggle from the second we got him home. Also, if he's used to a noisy aviary, being left alone in quiet might be scary to him. You can try playing some soft music for him too.

I used to read books aloud with my cockatiel too! . Honestly, i can't wait to spend time with him, but I don't know if I should let him out if he doesn't even know step up. I think ill wait for some bonding to happen. I'm excited.

Congrats on your new greencheek.
For now, keep offering whatever the breeder was feeding him, and spend time near him, but don't push handling him if it seems to scare him.
It looks like he is probably flighted, although it's possible he was given a show clip, where they leave the outer few flight feathers and clip the inner ones. Either way, he can probably fly a bit, so it's a good idea to work with him and develop some trust before you let him out. At the same time, you don't want to leave him caged for weeks, either, or he can become cage bound and more fearful of coming out. It's probably best to spend lots of time near him, and to start offering him treats by hand as soon as you can identify his favorites.

In addition to offering whatever he's used to eating, you should also try offering some fresh foods - most fruits and veggies, as well as cooked beans, lentils, rice, or other grains are good for them (avocado is toxic to them, however).
Veggies, beans, or grains you are cooking for yourself as 'people food' are fine if you save some out for the bird before you add salt or sauces.
You must log in or register to reply here.