Update on my new bird! 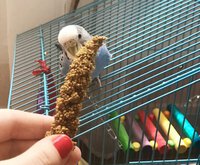 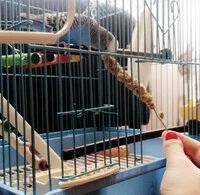 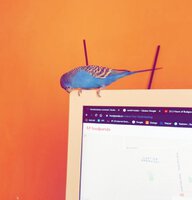 This is my budgie Tiki. A few months ago, I was worried about his beak and also about how to get closer with him so I posted here! I got so much feedback and I am thankful for everyone's advice.
His beak is definitely better! I am still confused about his gender - but I believe it's a male, since his beak got blue at some point. My uncle also owns an old budgie, and she's a female. And there are many things different about Tiki and her.
Back to Tiki.
I've had him for almost 8 months I think and I got him from a petshop, so I feel like that explains his distant behaviour. Advice on getting even closer to him? I've tried everything.
I really love him and care for him and I just want to show him that I don't intend on hurting him or anything of this sort. Just budgie-human love!
This is the first day of feeding him with millet straight of my hand and I'll keep doing that! Really excited...

Sounds like you're doing good. Time spent together will be the biggest influence on your relationship. I have to ask, is that his regular cage? How often/long does he come out?

tiki07 said:
If I have my hand in the cage and it's too close to him, he will bite it playfully, kind of. I know he can bite really hard but he just chooses to not bite me.
Click to expand...

Also. Budgies don't bite hard, unless you're cornered them. He is simply testing and tasting your hand which is good

@scrape Yeah, that's his regular cage. I know it's pretty small, but I did not get the chance to buy a bigger one. For now, I'm making up by buying him lots of cool toys and snacks. He's not the type to move around a lot, he has a corner where he stays. On top of his ladder and in front of a mirror and a bell. Shy birb.

Also! He always comes out. He stays inside only if me or any member of my family isn't home, and at night we tend to close him in the cage if he gets in, because otherwise it's really difficult for him to get in at night.

It's good that you let him out! Lots of stands and toys outside his cage are great enrichment! Budgie are awesome little pets, are Tiki's wings clipped?

@scrape No, I wanted him to enjoy flying as much as he can!

tiki07 said:
@scrape No, I wanted him to enjoy flying as much as he can!
Click to expand...

Aw that's great! Budgies love to fly! And I for one, love to see them fly!

tiki07 said:
I believe it's a male, since his beak got blue at some point
Click to expand...

Think again, she's 100% female.
I'm really glad you've come back to us with this great update. The way you just disappeared from the forums had a couple of us worried.
Welcome back!
@Lori D Pert
Last edited: 5/19/20

@Ripshod I really don't know at this point, but it doesn't matter, I love this budgie regardless haha. I disappeared beacause my school life got so busy! Glad to be back! Tiki's doing amazing!

tiki07 said:
@Ripshod I really don't know at this point, but it doesn't matter, I love this budgie regardless haha. I disappeared beacause my school life got so busy! Glad to be back! Tiki's doing amazing!
Click to expand...

She's looking great compared with your intro post. All credit to you.

So glad you are back! She (yes she..lol) looks so much better! Sounds as though she is doing great!

Congratulations on your bonding progress with Tiki! She does look great. I think anyone who has gotten a budgie from a large pet store chain will tell you that it takes longer for those birds to become used to hands being near them. And yes, there are exceptions. I hope she will continue the bonding process with you.
You must log in or register to reply here.