Urgent My bird is sneezing but no discharge

Hi, I’m new here snd this is my first post. I have a 2 month old parrotlet named Tweety. I handfed him ever since he was 3-4 weeks old. This post is gonna be a long one but I’d appreciate reassurance and advice thank you so much!

Now that I think of it he’s always gone through phases where he would try to adjust his crop and start itching his nose and head really hard (no injuries btw) but his nostrils would get a little red after the itching. Recently he’s been doing it a lot more and I’m thinking of taking him to the vet tommorow just in case. He has been sneezing a lot more (daily) and I even hear him sneezing at night. Now, no discharge, eyes are clear, poop is just fine (except the urin is yellow sometimes but I assumed it’s the seed mix I’m trying to wean him off of since there’s some colored pellets and seeds) and his nostrils seem clear aswell + he can perch fine and he still eats and has a good appetite thankfully! He weighs anywhere between 28-30 grams.
He took a nap last night cupped in my hands but I noticed everytime he would “fall asleep” it takes a few seconds before he’d start making a “v-v-v-v” sound and let out a little sneeze then he’d wake up, close his eyes and try to sleep again.. which alarmed me even more. I tried to get it on camera but as soon as he sees the phone he’d leave my hands and waddle over to it lol he loves phones. After that I decided to get a large bowl and fill it with hot water and I placed a blanket over his cage bridging over the bowl so the steam would reach him, (he was in the cage) did it for about 10 mins hoping it could ease him a bit not sure if I did the right thing. I then cleaned his cage with the usual vinegar and water solution and placed some fresh paper towels so he doesn’t sniff his poop while sleeping etc... for hygiene purposes. (I do this almost every night) now I know this is super long but I wanted to make sure I got everything in there. I’ll see if I can attach some pictures where you can see his eyes and nostrils as well as him itching his head and nose Thanks in advance ! 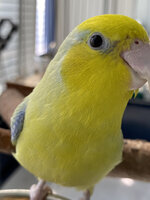 He's a cutie. Typically, some dry sneezes are normal. Wet sneezes can be cause for concern. If you are worried though, a vet check is always the safest course. The air could be dry. Sometimes I run a vaporizer/humidifier for my birds- like the kind you put in a baby's room.

(And godmother to Sunshine) Thanks Conure101 for the siggy!
T

I feel like he could’ve caught a cold maybe ? With the weather changing ? Sadly my parents and I share an AC. So my AC is connected to theirs and the controls are in their room. Sometimes it gets really cold (ex. 15°) and I can’t really turn it down cuz it’s not always in my control I have been trying to keep him warm though (note that he’s not placed near a draft) and I cover him with two thick covers at night and leave room for air ofc lol. I do turn off the ac in the morning though and open the window and I prop him next to the window to get some fresh warm, humid air. Should I run him another steam bath? Like I mentioned in the first message ?

I would probably take him in just to be sure. I've definitely been told "no your bird is fine, he's actually mimicking your sneeze" but I've also had "it's a good thing you brought him in, he's quite ill."

I don't mess around with respiratory issues. Peace of mind is worth the cost of a vet visit.

Mizzely said:
I would probably take him in just to be sure. I've definitely been told "no your bird is fine, he's actually mimicking your sneeze" but I've also had "it's a good thing you brought him in, he's quite ill."

I don't mess around with respiratory issues. Peace of mind is worth the cost of a vet visit.
Click to expand...

yikes, yeah you’re right I’ll see if I can take him in tomorrow... hopefully everything will be okay, and if not then hopefully it’ll be something easy to treat. I ran another steam bath for him right now
You must log in or register to reply here.