I posted a bit back about my little Cockatiel, Nimbus (He's almost 5 months old) but now I have a new concern and though I've read up about it I'm still curious to see what the lovely people of the site have to say.

Nimbus falls off his perch when he sleeps, once or maybe even twice a night. During the day he's a clumsy acrobat who stumbles around his cage (still learning to maneuver I guess) and I'm not terribly worried about that but the sleep falling is starting to worry me. I've heard of night terrors where birds get a fright, fall and freak out but Nimbus doesn't freak out. He'll be sleeping peacefully then suddenly fall. He catches and flaps, usually landing fairly safely then sits at the bottom of the cage looking mildly perturbed but not in any way frightened or wild. After, he'll generally climb back up, get comfortable, grind his beak and fall right back asleep.

I have two theories so far. One is that he gets too relaxed which is something I've heard some birds do and the other is that because our vet trimmed his claws and he has little grip. I think my first theory is the most likely but I do wonder if maybe putting that sand paper wrap on the smooth wood bar (his favorite sleeping spot) would improve his grip? He hasn't hurt himself so far (Other then the occasional bent tail feather, thankfully no blood feathers) but I know that if he is passing out or fainting it could be a very serious health concern.

Generally he is an active baby, has excellent flight control and very recently visited the vet with a clean bill of health other then him being slightly underweight. He holds onto my finger well and doesn't fall if I move my finger around so I can assume then his wakeful balance is fine... 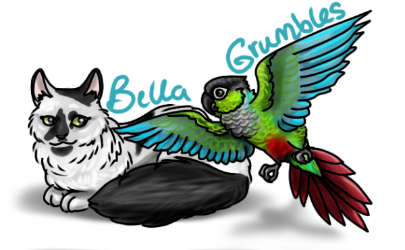 Thank you Drini for the signature!
Grumbles

If he is falling every night, more than once per night my suspicion would be a neurological disorder or nerve damage of some type. An infection in the sinus system will also affect the balance system. A bird that young/old should not be falling at all. A night fright is a panicked flight, not a fall. A previous panic flight may even be the cause (injury).

Perch "size" is also a factor. A larger diameter perch is easier to stand and balance on. Keep those perches low (and possibly a platform instead of a perch) until this issue is resolved.
Cockatoo John's Parrot Paraphernalia

That is what I'm super terrified about!

But we've been to the vet recently and when he's awake he's fine.... I'll ask my vet but I hope it's nothing serious, and he was sick a month back (He fell before the sickness and got a clean bill of health last week) and I spent A LOT of money at the vet....as a student, budgeting for vet trips is getting difficult.

Alexi said:
During the day he's a clumsy acrobat who stumbles around his cage
Click to expand...

That is not normal but he is still pretty young. Does he fly?

I would discuss it with your vet, but what type of perch is he sitting on? Maybe try a rope perch or something easy to grip. I probably wouldn't do the sandpaper. Does he have all his tail feathers? I know they help with balance. He could still be a bit clumsy at 5 months, but I would think he could stay on a perch most nights. I hope he's okay!

He flies beautifully with exceptional control.

My parents in law's 13 year old cockatiel flies like a twit and aims for solid objects and he makes her look like an idiot with his incredible flying skills. He has his long tail feathers but his wings were clipped by our vet recently but even still he adjusted to the shorter wings and flies gracefully. When he's awake and not trying stupid acrobatics in his cage he's balanced and shows no problems. It's just at night when hes asleep...

I realize I said he was clumsy but he has a lot of toys and I think he's just adventurous so he often tries silly acrobatics, he's clumsy when climbing around his cage I guess is what I meant?

He has a lot of different kinds of perches in his cage but his favourite to sleep on is a simple smooth wooden one that came with the cage. It's his sleeping spot

I've lowered all the perches in his cage and he seems annoyed at not being high up so far but hasn't gone to sleep, so we'll have to see.

Maybe the wooden one is too smooth? He sounds like a beautiful bird!

That's what I'm thinking? I'm still going to check with my vet but we lowered all his perches and placed a rope one more center and he didn't fall off that one last night.
I've looked into making or purchasing flatter/broader carpeted perches if he is truly having a problem <3 I'll custom his whole cage if I need to.

Thanks so much!! I think he's quite special

Thank so all so much for the advice and input!!

We originally had thin and thick perches for Buddy, and found that she was most comfortable with the thicker ones. Eventually we switched to all thick, and through the skinny ones out. The thicker ones just seem to allow them to get a better grip.
Buddy, fly high little one.

Stormy doesn't like the wood perches..I would watch him in his cage during the day and he avoided them. He would go to ropes or climb the bars..his favorite during the day is the triangle rope swing. I cut the Frey string rope off the bottom cause I heard it was a hazard. At night he sleeps on this short thicker half moon rope. Sniff sniff.. he finally gave up sleeping in baskets.. baby bird grew up..I took out the wood perches
You don't own a bird, it owns YOU!

he is also still a baby, Sweet Pea was clutz for a while too. I think they all go thru that stage. try thick perch or comfort perch for a while
Forever Rocky's

I put an atom in Valentines cage, gives her a good grip

Where a question is never too BIG or too SMALL​

Thank you all so much for the advice as it all paid off!! We first lowered all his perches closer to the floor of the cage until he stopped falling off anything then replaced the thin wooden perches with thicker ones and he hasn't fallen off during sleep once since! He seems much happier with the thicker perches, at least to sleep on. He does still have one of the thinner perches he uses when he is awake, but he's particular about his sleeping spots and it is not located in one of his specific spots. He also seems to be less clumsy the older he's getting

Was going to suggest vet wrapping a perch to see if that helped but sounds like youve got it figured out.

Sig made by :
Macawpower58/animated by Eloy
Thanks I love it!
L

Hi. Does he have a rope perch? I'd try couple sizes. How about trying a platform? Maybe he will feel more secure on something flat but high.
You must log in or register to reply here.