So a few weeks ago we noticed our cockatiel Cricket acting kind of strange. One night he was eating and tried regurgitating. Nothing came up. He then began to exhibit some very strange behavior. He would begin feverishly “preening” his chest, close to his crop area. But he wasn’t actually preening, more like digging at his skin and ruffling his feathers. He would then pause, and freeze in the preening position, eyes wide, and then suddenly vibrate, almost like he was having a spasm. We immediately took him to the vet and found out he had an infection in his crop. Great, problem solved! Just kidding... The behavior got better after a few days of taking antibiotics, but then went back to the same about a week later. We take him in again and they say he is clear of the infection. They put him on an anti inflammatory to help with the behavior. But it’s gotten 100 times worse! So bad in fact that I’ve had to make him an e-collar to stop him from pecking himself raw and drawing blood. When the collar is on, he doesn’t try to bite himself. The second you take it off, he goes into a manic frenzy biting his chest and twisting up his feathers.. at this point it’s been a constant month of worry concerning his health and well-being. We aren’t doctors, so we don’t know what to do. Has anyone seen anything like this behavior before? Again, he was cleared of his original infection, so we don’t know why he’s continued the worsened behavior. 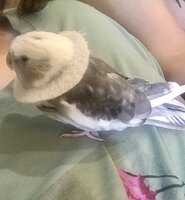 Maybe move this into the 911 section? @Staff 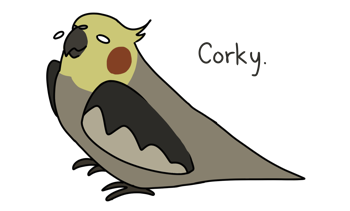 Thank you ume for the beautiful siggy!

Did the vet do any exploration into the crop? Almost sounds like he has an impaction to me.

scremme said:
Again, he was cleared of his original infection, so we don’t know why he’s continued the worsened behavior.
Click to expand...

Habit?
That sometimes happens in plucking birds, after doing it, they can´t seem to stop.

Or there is another health issue that is still undiscovered.

I would want xrays, workup for giardia/parasites, and probably bloodwork. Does his crop seem to empty normally?

enigma731 said:
I would want xrays, workup for giardia/parasites, and probably bloodwork. Does his crop seem to empty normally?
Click to expand...

We actually had xrays and bloodwork done and everything came back negative.

Mizzely said:
Did the vet do any exploration into the crop? Almost sounds like he has an impaction to me.
Click to expand...

During the examinations, they determined nothing was abnormal with the crop except for the infection, which has now been cleared up.

enigma731 said:
I would want xrays, workup for giardia/parasites, and probably bloodwork. Does his crop seem to empty normally?
Click to expand...

The crop seems to be functioning perfectly fine! They also said their seemed to be nothing wrong with his skin parasite wise.

We actually have been talking to a vet in a different state, due to the fact that I felt our current one wasn’t understanding the urgency of our situation. Our new vet, has told us to go off all medicine for a few weeks and see if it helped. It actually did!... for about a week. Then the molting started... and i think it threw Cricket back into the habit.
BUT we will continue to work with him and not give up!

Did they do a workup for fecal parasites? That would be the only other workup I'd want.
You must log in or register to reply here.