I have recently brought home my first green cheek conure I've come to call Sunny. I don't know the gender (I default to male since "it" sounds impersonal) but he's hand fed, recently weened (about 4 months) and has been in the house for almost a week.

I'm no stranger to small parrots as I've raised cockatiels in the past, but this would be my first conure and I want to make sure he has the best upbringing to prevent troublesome behavior down the road. That being said, Sunny's been very sweet and cuddly, but I'm noticing skittish behavior that is characteristic of a bird that isn't fully comfortable with the owner just yet. I'm wondering if this is something that is attached to age, personality or something else.

He's eating, drinking and is within proper weight measurements, but he's a little reluctant to really explore his cage or go outside even with the cage door open. He's also been resistant to interacting and being handled. The supplier that sold him to me said I should not be afraid to be a little assertive when taking him out of the cage since he's still very young and hasn't figured out how to step up. Besides a little resistance, he's been ok with it for the most part. He takes a little bit of time to calm down after getting him out of the cage, but right after he seems to want to go for the closest soft corner/cavity to snuggle into. This ranges from pillows to hands and while very cute, is slightly worrying since I wonder if this is a fear response and not a sign of affection.

Right now I'm trying to use treats to get him to step up and be more excited when he sees me. I also put my hand near the cage for a little while to get him used to me and hang out with him for at least an hour a day. The step up training usually results in him gnawing on my finger out of frustration, but I'm making progress.

I want to make sure Sunny's well taken care of and is happy to see me when I come home. With my experience with birds, the early phases of their life are what cement your relationship with them and can make a bird either be outgoing and sweet or shy and nippy. Is his current reluctant and skittish behavior typical of young GCCs and will mellow out with age or is this something I need to give special attention to?

Below are some pictures of the little guy to give some examples to his affection for soft warm places. Once he's snuggled up to something, he's about as placid as a potato. It's getting him to actually come out of the cage that's the hard part.

Thanks in advance. Hope this isn't too annoying a question to ask. I'm not new to the bird scene, but it's been long enough that I would love to get some advice! 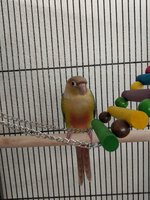 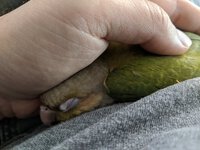 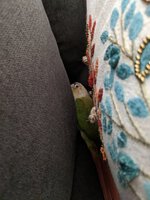 Welcome- He may have Cinnamon coloring/ mutation! Breathtaking!

I'm still waiting for weaning to be over before my cheekie makes the first trip home. I'll defer to others to answer those questions.
Last edited: 9/8/20

Welcome to the Avenue!

Circling said:
Welcome- He may have Cinnamon coloring/ mutation! Breathtaking!

I'm still waiting for weaning to be over before my cheekie makes the first trip home. I'll defer to others to answer those questions.
Click to expand...

Thanks, Circling! He's a pineapple based on what the supplier told me. I am happy for you that you'll be getting yours soon! I hope Sunny is as affectionate and playful as his kind are said to be and that yours will be as well!

Thanks, Zara! I am grateful for the warm reception!