We had thought Popsicle was too young to lay eggs, and weren't expecting any since she and our male (Habibi) have never figured out the whole mating thing. But here we are! I've found two eggs, both in separate places, and both smashed. The one seemed to have caved in on itself (calcium deficiency?) I've contacted my vet but won't hear back from him until Monday. Thought I'd ask the group if there is anything I can be doing while I wait.

We should have seen it coming when Popsicle decided to start hanging out underneath my dresser. But our birds live freely in the apartment, and she has always fancied smaller, darker hide-outs. I've blockaded the spot she was hiding in, under the dresser, and cleaned it up. I kept her caved-in egg, and placed it in an open box on the floor along with some nesting materials she collected. My hope is that by letting her keep it for a while she won't feel as much of an urge to lay again.

I've also moved their food into two new foraging boxes. We usually lay it out for them in a dish, but apparently that can make food seem overly abundant and encourage egg-laying. I moved a few things around in their favourite room as well (changes to the surrounding area was another thing Google said would discourage egg-laying).

As for the calcium issue, I've got cuttlebones around for them, but don't know if that is enough.

Any other ideas for what I can do to make sure the egg-laying stops, and to support her through it? We figure she can't be much older than a year and a half. So far as we know she's never even had a proper moult yet. At least now we know she is definitely a female, and not just a young male!

She's certainly not too young, although whether or not she's mature enough, physically or psychologically, is a different matter.

Are they eating a healthy diet? Pellets and vegetables?

You might want to add dark, leafy greens like kale and beet greens to her diet, if you haven't already, because they are very rich in calcium. It may be hard to convince her to eat them but there are lots of threads on here about transitioning food and adding new foods. This is a great diagram that shows what foods have good amounts of calcium and minimal phosphorus (higher amounts can obstruct calcium intake). The foods on the first diagram are just general high-calcium foods that aren't necessarily good for birds, so just go off of this birds-only diagram: 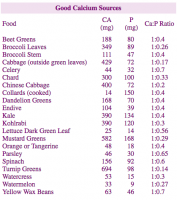 And even if she does eat plenty of calcium, she won't be absorbing nearly enough if she doesn't get a good amount of vitamin D3 in her diet and environment. Without D3, calcium cannot be absorbed properly and even if she eats the cuttlebones and dark greens, she won't get enough calcium. D3 can be found as an additive in pellets and in unfiltered sunlight. What would be best is to take her out (in a travel cage or with a harness on) for a bit every few days for about an hour a week altogether (maybe like 8+ minutes a day). Windows typically filter out D3 so light through them is useless for D3 and using a light setup typically induces many bad side effects, not to mention the fact that they really don't provide the bird with D3 evenly or at all.
Birds definitely don't need to mate to lay eggs, they'll lay eggs if they feel the environment is correct for it. In the wild, breeding season is very warm, there is an over-abundance of foods, other flock members (including you) are acting sexually (not human sexual behavior, bird sexual behavior which includes petting on places like their backs), and there are plenty of dark, small spaces that could be perfect for a nest. It is usually best to discourage egg laying in captive parrots because many are very prolific breeders that will lay at the slightest triggers (specifically cockatiels, but ringnecks are no exception). This becomes an issue when a female lays so often that she gets an overload of hormones, becomes exhausted from laying too much, and has a super high chance of becoming eggbound, especially if she hasn't absorbed enough calcium. So it would be for the best if you block off small, dark areas (which you've done), avoid petting her anywhere but her head (petting under the wings, on the back, by the vent, and other places are all very sexual triggers), and generally discourage mating or hormonal behavior. From what you wrote, you seem to be doing most of this already. Just read back over your post after writing all of this, whoops.
Best of luck with your girl, hopefully she feels better soon and doesn't lay any more eggs!

Thank you Monica and Lindsay!

I've blocked off all of the dark hiding places that I am aware of, and luckily have tomorrow off again so I'll be able to watch her to see if she finds any new ones. Spinach and broccoli are normally in their diet, and I've got an organic baby-mush cereal powder with calcium, iron, and vitamin B that I mix in with egg and nutritional yeast to make a birdy super food for them. I usually give them a mix of fruit or vegetables every day, along with their daily pellets, and various nuts and seeds as daily treats. So I think their diet is fairly well-rounded. But the vitamin D thing is going to be an issue. With it being winter (in Canada) it will be several months until I can take them outside. Thankfully the ZuPreem pellets I give them have vitamin D supplements in it, so I'm hoping that is enough. Pop likes to sit right beside the window, so perhaps she gets a little from natural light (though I understand this will be extremely limited). She's not a cuddler, so I'm definitely not accidentally stimulating her in any physical way. But she does seem to view me as a mate, since she will do the same clicking, pinning, and posing for me as she does when she wants to let our male know she is interested. Despite that, to my knowledge the two of them have never actually managed to "do the deed".

At any rate, thank you for the input and the calcium food-index. I really appreciate people taking the time to help me through. Popsicle has been a huge help too, keeping me company while I research and write to you! 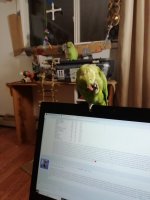 I wonder if the "super food" that you've been feeding them may also be encouraging her to be hormonal and lay eggs? If she continues to want to lay eggs, I would recommend removing that from their diet next.

Oh! Okay, I hadn't thought of that. Will do. Thanks
You must log in or register to reply here.