I’m a bit like that right now in that I’m considering cockatiels, conures, but also keep returning to that 40 yo B&G at the rescue. I won’t be able to visit until the first weekend in November I’m not really in a hurry and likely wouldn’t bring any bird home until after Christmas.

It is fun to dream, though, right?

Kassiani said:
I’m a bit like that right now in that I’m considering cockatiels, conures, but also keep returning to that 40 yo B&G at the rescue. I won’t be able to visit until the first weekend in November I’m not really in a hurry and likely wouldn’t bring any bird home until after Christmas.

It is fun to dream, though, right?
Click to expand...

Yeah
I'm "ready" now (cage, funds, etc).. but I could always be MORE ready. So it's not bad to wait for the perfect situation.
Just painful lol.
Cypress

Real Name
Bear (It's a nickname)

I was in a rescue the other day helping out and there was this beautiful lutino cockatiel. unfortunately commonsense chimed in and I knew I hadn't done my research so it would be an impulse buy which I advocate like crazy against. She was sooo cute tho...
It's the little things that make life wonderful

Guys.. I have another .. more serious problem.

I know it seems like I'm bouncing all over the place (pionus, blue crown, amazon, timneh, goffins?). But you know why I'm okay with any one of them.

I tell myself a baby amazon, cockatoo, or grey would be bad news. Puberty is rough. I definitely could handle it, but why do it?

The blue crown is smaller than I really want but more readily available than any of the others.
The pionus.. even the two breeders I have found says theirs only occasionally produce a clutch.
The rescues still haven't gotten back to me on applications i put in months ago.

And then today I made my biweekly stop at the closer bird store.
I've been there many times since I saw the BH pionus, but never saw anyone else who called to me. I held a cherry head conure. I held a yellow quaker.
And then I heard "whatcha doin?" 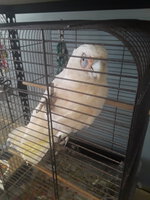 He is 4 months old. He flinched when some other people walked by his cage. The guy said he's a little hand shy because kids come in and poke at him.
He opened the cage for me.
Little guy grabbed my finger in his beak, pulled my hand down, and stepped up on to it.


My bf wants him.

I had to force myself to put him down. I said I am NOT walking out with a bird on impulse (especially especially a baby 'too) even if it is one I've looked into and considered before.. but I asked if I could come back and visit and the guy said of course.

Elysian said:
I want a bird as smart as an amazon, as chill as a pionus, as friendly as a conure..
Click to expand...

Haha honestly reading your profile and posts made me look into Jardines! But they seem even scarcer than the pionus

Elysian said:
Haha honestly reading your profile and posts made me look into Jardines! But they seem even scarcer than the pionus
Click to expand...

Yes they are definitely not very common

Elysian said:
Haha honestly reading your profile and posts made me look into Jardines! But they seem even scarcer than the pionus
Click to expand...

And remember, not all Jardines are like Ripley... there´s only one of him, and Shawna has him

I think that little guy is calling you! Since your bf wants him also, go back for another visit and see if he still reacts the same to you.

I'm definitely refreshing my reading on bare eyed 'toos today.
I would love a cuddle bird.
He's also already used to being out of his cage only in the morning and evening, and plays by himself during the day.

I dont like the pellets they use. Pretty bird? Never heard of them and they seem to be mostly corn and wheat.
Store guy avoided my question about abundance weaning vs "force" weaning, just saying he hasnt had formula in 3 weeks.
Also his "health guarantee" is only 48 hours, which is laughable. Though he says he does test for pbfd, etc.

Lots of people praise him on the local facebook groups but who knows how well they treat their own birds.

Mizzely said:
Most pellets are corn and wheat to be fair Remember that birds are primarily vegetarians and grains are much more usable forms of food for them than they are for cats and dogs

I feed zupreem to the budgies. It at least has some other stuff.
I feel much better if you use pretty bird! I'd just never heard of them at all and was trying to compare the ingredients to our zupreem

I heard back from the budgies breeder already and she said she knows the guy and he does a good job with his birds (though obviously he is more retail oriented).

I'll wait to see if the vet has anything to say..but wow it would be amazing to have a baby to work with by christmas!

But... I dont have any cockatoo names

I´m rattling my brain trying to think who has a little corella that I can tag...
@expressmailtome do you know any active members?

I know the powder could be a thing with the budgies though. Thinking about how I could make that safe while I wait for my vets opinion (she is closed till tomorrow)

I also use Pretty Bird (species specific) pellets in Burt’s mix of pellets. He loves them.

I just asked him to tell me before he sells the bird to anyone else.
I'll go back to see him again tomorrow.

Unfortunately I'm not expecting a good opinion from my vet.. the store owner asked me who I use and then admitted that she doesn't like him because she runs a rescue and he is retail. But I hope she can be objective about whether his birds tend to have issues.
I'm torn on what I will do based on her opinion but we'll see.

It might be helpful for you to write down all the pros and cons of each choice. I find that really helps me to organize my thoughts, I too can be a little all over the place with my ideas. It’s nice to write it out because you can look back at what you wrote when your emotions start to kick in. It’s also nice to see the pros and cons side by side. i know you said there are traits to all the species that you really like but not one species has all the traits you want in one. I might take some time to really think about what trait is the most important to you long term. Good luck!
My name is Jackie,