My spouse was cutting our cockatiel Lio’s nails, and cut one too short when he wriggled in his towel burrito. It was bleeding a lot, we put cornstarch on it and it stopped for awhile. The toe got wet though, and started bleeding a lot again. For now it’s stopped, but we’re concerned about him. We also tried cayenne pepper on it, and tried a cayenne-aloe Vera paste but the paste seemed to make it bleed again (moisture?)

I can tell it hurts him a lot and it just makes us feel awful, but he’s also not acting like his normal active crazy self. Sitting quietly and not taking any offered seeds or anything. His toe, chest and cheek have dried blood and look awful but I don’t want to pester to him while it’s healing.

Is this a situation in which you just give him time or should we be concerned about blood loss? Should we take him to the vet for something like this or will they just send us home? First time having this issue...

Thanks for any advice

Try the concoction again, and put slight pressure at the tip of the nail, it may take a few minutes.

If you can't get the bleeding to stop, go to the vet.
If you can stop the bleed, then allow him to rest at home.

I had a similar experience where I was beginning to worry about blood loss and cornstarch and cayenne were not working. I finally got the bleeding to stop by taking a bar of soap and scraping the nail across it so that the soap packed the nail bed. I held my parrot for a very long time so there would be no beak contact with the soap until the bleeding stopped, then I carefully cleaned the dried soap out of the nail bed. This would probably work with wax also.

Thanks for the advice. I was really worried but he’s doing a lot better now. Singing and eating after he preened his foot.

There's a great product called Super Clot you might add to your first aid kit for the next nail trim. And here's a diagram to share with your husband on the correct angle to trim nails. 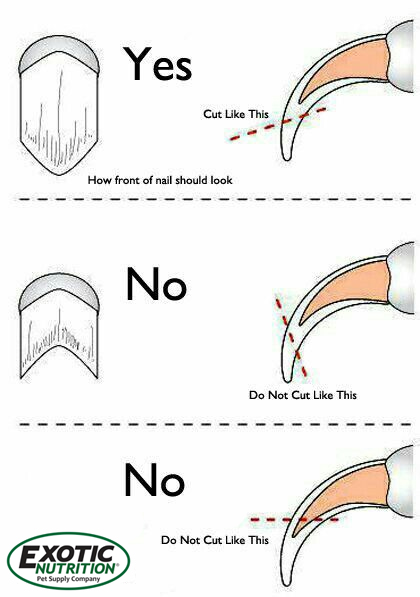