I NEED HELP PLEASE, baby in my ¨garden¨

Zara said:
No. In English there´s no default and usually an animal of unknown gender is referred to as it. Eg. ¨The cat plays with it´s ball in the garden.¨

In Spain, Every animal already has a gender ¨assigned¨ because the actual word is feminine or masculine.
For example, Elefante (elephant) is masculine. Jirafa (Giraffe) is feminine.
Pigeon is Paloma, and Dove is Tortola - both are feminine. So when talking about the animal without knowing it´s gender it would be reffered to by ¨it¨ but here we have masculine or feminine ¨it¨ - ¨El¨ male or ¨Ella¨ female. There is no masculine/feminine neutral ¨it¨ word here.
So linguistics made him call Pepper ¨She¨.

BTW, is there a way to visually sex doves? The parents look the same ...

Spanish is the same as French then, so it is natural he'd say she.
As for English, I've often heard people say she of a baby for example, although there was nothing to indicate it was a girl. And since baby is a masculine word in French, I noticed.

Yes Italian is the same with the M / F

Hmm I don´t know why they would call a baby she.

Look what I found on the floor... 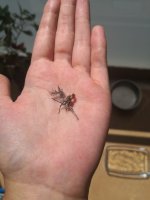 I've got a hold of pepper to check for bleeding or an open wound.
To me it loos like when a scab falls and new skin is underneath.
I will be emailing the pictures to the vet.
Anyone here have any thoughts? 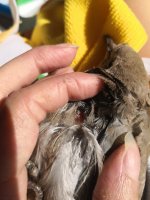 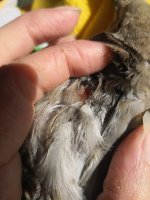 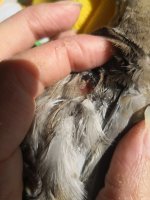 please excuse my dry skin. I've made the pics small incase anyone doesn't want to see.

could have been scratching himself, but it is not bloody, looks like he is healing well, which is good because you won't be able to hold him there for long now

I wonder if he ripped a stitch out?

Gribouille said:
but it is not bloody
Click to expand...

correct it was dry when I found it, I can´t see any dried blood on it either.


CrazyBirdChick said:
I wonder if he ripped a stitch out?
Click to expand...


Gribouille said:
which is good because you won't be able to hold him there for long now
Click to expand...

No, he will be away soon.

I´m staying positive because there´s no reason to think something wrong is happening. No response from the vet yet.

I think it's old skin, and perhaps it took a stitch with them when it was falling off. You was at the vet yesterday and if there where something wrong I think the vet had told you so.


Zara said:
I´m staying positive because there´s no reason to think something wrong is happening.
Click to expand...

I would do the same.

Looks and sounds like exactly what you said, healing and preened off.

Eloy said:
You was at the vet yesterday and if there where something wrong I think the vet had told you so.
Click to expand...

Yea, we we´re there yesterday and the vet said it is healing well and that he would take the stitches out in a week if he was still hanging around my balcony.

If there was bleeding or a visible wound I would have took him right to the vet.

He has finished his course of amoxicillin. He had 8 days worth but I lost two quarters so that was a day lost. I gave the last pill last night.

This was mum and dad this morning,

Trying a new approach with the feeder.... 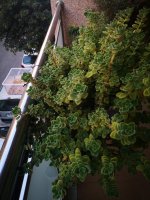 I've dropped the big Bush back a bit so I can clip the feeder in the middle.
I also drilled extra holes so I can put the lid on at night and when it rains.
I didn't want to move the Bush completly because maybe they use that as reference. Let's see.......

Some pictures of the healing. I took these last night. I had to grab pepper in the dark because I can't get near him any more, he doesn't like humans which is good.

Also it may sound strange but I noticed some uneaten seed sprouting behind the pepper plant so I have dug it out and potted it. It can stay here and grow once pepper fledges. Maybe one day he'll return and eat some seed from it... 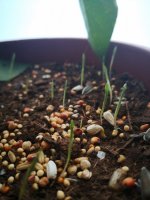 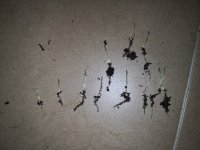 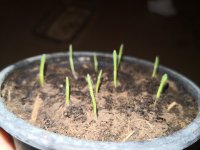 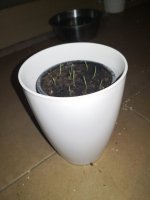 Another thing, I washed my windows! I did it at midnight last night so that I could make some more videos today

OMG I want to "like" the last post a million times! Yay Pepper and well done Zara!