savor every minute you have left, be his comfort, be his everything.
Forever Rocky's

Gotcha day 4/30/16 Bebe is 13 years old
They Fly into our hearts and leave feather dust on our souls, forever.. My Babies that have left the earth and are flying free over the Rainbow Bridge..

Yes it's sad that he cannot, but don't look at it that way. He is so content that he is trying anyway.

He is happy because of you.

He's doing that because he is content. Bee, you have given him so much - joy, companionship, the most wonderfully dedicated care when he became sick. Please try to make this last day special - give him some favourite foods, talk and sing to him, let him do all the things he isn't allowed to. I'm pretty sure Leia has a bucket list of all the things she'd like to eat but I don't let her.

You have made a little bird very happy. Chirp's life is and was immeasurably better thanks to you. I hope you can hold that in your heart.

He spent an hour telling, chattering, flying loops around the room and grinding his beak (or trying to). Then he stopped, and hasn't moved since. He was so happy.

I feel so conflicted. I don't know if what I'm doing is right.
Fuzzgig (pacman frog)

It is right. The gift of euthanasia is that we do it while they still have some happy times, so they do not get to the point where they are only suffering.

I can't stop crying. I'm a mess. Chirp is sitting on his little basket, just looking around 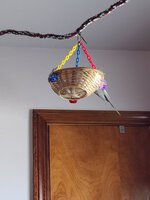 Prayers for you Bee.

I'm thankful he isn't lying there in pain. It is hard, I know. I waited too long on one of my dogs and the guilt was bad. He basically went into a comatose like state from his pain.
There is a great deal of wisdom available here on AA from experienced bird owners. They have helped me to understand that even a "clueless" soul can muddle through with the right amount of guidance.

I'm so so sorry, Bee. Sending all of my love to you and to Chirp.

It's never easy to say goodbye, but you have given him the most wonderful life he could have hoped for, and loved him with all that you are. You could not have been a better or more generous parront to him.

I played him our song. He chattered while I sobbed.

I know it’s sooo very hard Bee, but try to keep your sobbing till after he is gone. He doesn’t understand why you’re sad and it will be confusing to him. They do pick up on our sadness and despair and I really think the last thing you want for Chirp right now is for him to be worried and stressed for you. Try to actually enjoy the last few moments you have together, that is what he will be doing. Your crying will be confusing and possibly even scary to him so maybe go outside in the yard to let some of it out, that way he is as stress free as he can be.

In 24 hours we will be headed to the vet

taxidermynerd said:
I played him our song. He chattered while I sobbed.

I loved that you played him your song! I'm so very sorry about all of this, that you are going through. He seems so content because he may understand you are sad but still lovingly helping him tomorrow. I know you have twisted emotions about this being time but it sounds like it is, sadly. You are actually putting your happiness & emotions under his best interests. PLEASE, find some peace in this decision because it IS best for him. Only a great parent can do this for the innocent that can't speak for themselves.

Know that you will be in my thoughts & prayers tomorrow. Know that you & Chirp are loved here in NY! I'm always here if you want to just PM & not post for awhile.

I just put him to bed for the last time
C

Honey, sending you lots of Minnesota hugs, I know how hard this is. I went thru this trip Rocky,5 years ago. It sucked, still sucks. Love on yourself love on every last seconds you have left. Blessings to you.

Hugs from the west coast!!!

Having to do this with a bird and a cat, it aint easy.... both were "same day" decisions... I knew she wasn't feeling well, but didn't know why... took her in as she was getting worse. Second set of x-rays indicated what they thought was ingested cat litter was actually cancer. They gave me pills to try and ease her pain and give me some more time with her. Went home and told everyone to say their goodbyes. I really wanted at least a few more days with her, but she then did something that resulted in me taking her back to the vets that day... they took the meds back (unused) and gave me a refund and we let her go to sleep. It was hard with her as I didn't know that morning that I'd be putting her to sleep later in the day.

The bird? Honestly, I hoped she would have died at home. I really did because I *DID NOT* want to make that decision for her. I knew that morning that she would not see the end of the day (one way or another). Went to work and when I got back at lunch, she was still alive.. so took her in during my "lunch break". I couldn't allow her to continue suffering. She was "fine" the previous day (as "fine" as an elderly bird could be with health issues) but had obviously hurt herself sometime in the night. The vet agreed with me on my decision. She was a fighter, even at the end. Saying that I wanted her to die at home just sounds so heartless and cruel to me... there could have been a chance she may have recovered... I don't know... but with her failing health, it didn't seem right to prolong any suffering. She was 19 years old, give or take a year. I had put her through surgery at 14 years old, and that was tough enough as is watching her recover from it. If my vet knew at the time that she was 14 years old (rather than the 9 they had in records - for some reason), she might not have done the surgery. At least, that's the feeling I got... If, at 19 years old, she was in better health than she was, I might have tried to see if I could help her recover, but she wasn't eating or drinking on her own, and I have no clue how much she knew what was going on around her.

It's been 5 years since the bird (a bourke) has passed on, 3 years for the cat... and I still tear up just thinking about it. Three years ago though was extremely rough for me. (lost many animals - before I could recover from one loss, I was losing another)

My heart breaks for you and Chirp, having gone through this myself. I wish we could send some great big animal hugs your way!

Just told him goodnight for the last time. I always tell him when I put him to bed, and right before I go to bed. And this will be the last time

I know it is hard, I am so sorry you are going through this.
Please know you two are both in my thoughts.

Talk birdy to me.

Thinking of you today and sending big hugs your way.

RIP my sweet Twilight. I will always love & miss you.
C

Sending more hugs for you...
You must log in or register to reply here.