@Mockinbirdiva That is so beautiful!!!! You are so talented!!!


Mockinbirdiva said:
I'd have to buy some bunny pellets and feed the lot!
Click to expand...

They may not eat them. They like bread I don´t know if I posted in this thread but there´s a little old dear who frequents the park with bread for the bunnies and they all run to her for it. She´s a little woman all hunched over, sort of like the witch with the apple in snow white, but she´s very polite. I´m sure bread is bad for the bunnies though.... I always take veggies for them.


fashionfobie said:
Guineas are just lovely! There was a flock I bumped into at UQ's campus and they were so friendly and just wanted to talk to me about their days. They sat with me for maybe 40 minutes. They are wonderful birds.
Click to expand...

I haven´t seen the second here in a while so maybe the worst happened. This guy is always alone. He comes over to me, but won´t go near my nephews. I think he is afraid of children, maybe because other children chase him? who knows I noticed a duck did the same - would eat from my hand but was scared of the children.
(silly question?) can they fly? I haven´t seen them ever flap their wings.... 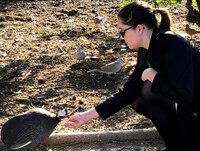 Kneeling in the stones to show the little ones, 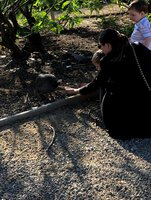 This was on Día de los Reyes magos (6Jan). The kids woke up got their gifts and we dressed smart, it is very typical here to dress well and go for a walk somewhere, the beach front, marina etc and I chose the chicken Park

Zara said:
(silly question?) can they fly? I haven´t seen them ever flap their wings....
Click to expand...

Not a silly question at all. Most forest floor or grassland fowl use their wings for getting away or jumping down, but not really flying in the way you see ducks. Peacock for example they don't really fly. They run and sure why not leap and flap to a roof or higher branch but they can't fly a long distance.

Domesticated chickens and turkeys can jump and flap to get to roost. However depending on their body type they can't get much height at all. My light bodied and athletic hen can easily hop to my shoulder. I am 173 so I am tall enough. She could probably even jump out of the coop, but it is fully enclosed with a chicken wire roof and all My large astro Rodger couldn't gain any height. In fact the neighbor's dog scared her and she just, jumped from a steep step, tried to flap and broke her hip because she was a big hen and she could not support any of her weight. We had lots of ramps for her which she always used, but the dog just scared her and she didn't care about her ramps at that moment.

The wild bush turkeys that live in my area are amazingly athletic. They run through the forest hopping from branch to branch using their wings to glide down steeper areas..But they can't fly, not like other birds.

Guinea fowl fall somewhere in the middle. A lot of keepers believe in clipping their wings because they are a little more athletic and can jump and flap to the roof of a house, like peafowl. Guinea fowl also aren't respectful of territory like chickens. They can wander and "fly" off. Though they fly like most ground fowl...more of hop flap. It isn't like the graceful goose or song bird.

The word is spreading around the dove community. Everyone keeps talking about generous Zara with all the goodies! These little ones had to come and see what all the fuss is about.

Very interesting. I have never seen those guinea fowls flap. There´s a flock at the safari zoo and they are the same, always walking.
I have seen peacocks ¨fly¨ before, one cleared my head and landed on top of a roof that was a good 3metre high, I´ve seen many peacocks fly, and chickens... just never the guinea fowls.

WOAH! I would never have thought they had white wings, or that they could move like that!! Thanks for sharing. I feel sad for the lone guy at the park, he´s all alone and quiet It looks like they should be in a flock... like chickens..

Zara said:
@Mockinbirdiva That is so beautiful!!!! You are so talented!!!


They may not eat them. They like bread I don´t know if I posted in this thread but there´s a little old dear who frequents the park with bread for the bunnies and they all run to her for it. She´s a little woman all hunched over, sort of like the witch with the apple in snow white, but she´s very polite. I´m sure bread is bad for the bunnies though.... I always take veggies for them.
Click to expand...

Thank you Zara! It is fun to take an object and turn it into something else.

I'm sure the bunnies do like the bread. It's a processed food that doesn't give them what they need for a complete diet and could eventually lead to gastric problems and a shorter life. They would love some good timothy hay and I thank you for bringing them vegetables! They do make a commercial pellet for rabbits.

Hard for me to come to terms with people dumping their pet bunnies in the park to fend for themselves. They don't have the instincts their wild cousins do. I would imagine some of them fall ill from eating food off the ground around all the different types of bird feces. Coccidia, salmonella, giardia to name a few. Myxomatosis is caused by biting insects like fleas and mosquitoes and is deadly to rabbits. It killed 99% of the UK’s rabbit population when it arrived in the country in 1953.

And there's quite a bit more!

I will see if I can find pellets maybe the indi bird shop will sell them by weight...
It's so sad to see a new bunny there. My mum said she spotted a very little one the other day but a family were chasing it to catch it... I never saw it. They have a hard life in that park. The bunnies I have held in the park have come up to me and hopped up, if a bunny is scared and won't come over I will toss food to them.
When I go for food for the doves I will ask the lady

There are rabbit rescues around the US... I know they would probably go catch them all to place in homes. I wonder if there are any rescues there?

I have never heard of such.
I had a hard time finding reputable bird sanctuaries. I did come across a great org on FB, a group of people dedicated to helping pigeons. I know a lot of rabbit rehomes are done via dog kennels/shelters.

Zara said:
I have never heard of such.
I had a hard time finding reputable bird sanctuaries. I did come across a great org on FB, a group of people dedicated to helping pigeons. I know a lot of rabbit rehomes are done via dog kennels/shelters.
Click to expand...

I typed "Rabbit rescues in Spain" and found this link quickly

Guess where I have been 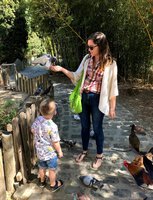 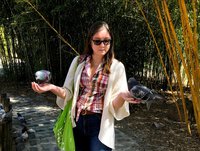 It seems like an excellent time for you to go to your happy place, and you remind me of Cinderella!

I think everyone should have a special outdoor place and visit it frequently, especially now.

Just bobbed into the park!!!!! They have opened it yesterday!!

The lack of chickens was undeniable, and eerie.
When we first walked in there was a seagull on the floor!! Never seen that before there...
Walked around... No chickens!! Lack of pigeons... Normally I drop seed and they came running, today nothing.
The donkeys were taken away a long time ago, and I saw a cock and a hen snuggled up in their hut, so fed them.
Went to the back pond.... The lone Swan is gone.. After all these years. A sad sight.
But I spotted some ducks and threw seed and they looked hungry so fed them... All of a sudden mummy duck and her fluffy chicks appeared!!!!
We had a lovely time feeding them, though Mr seagull made a reappearance and swooped in (to try taking a duckling?). Mummy duck was fierce and jumped a metre out the water to defend her babies. Incredible. We stayed a while. The seagull tried again, again mummy duck fought him off. The third time the gull took flight he circled over head a couple of times then flew away. We waited a while then left her and her chicks to find shelter.
On the way out, we saw one hen and a few chicks.

I don't know why there is a decline in wildlife. Did someone take these birds? We're they stolen? Did they starve to death?
I can understand the pigeons leaving, no scraps so they leave. But the chickens and the Swan bother me.
I just hope they are either safe or at peace. 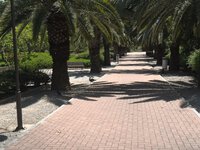 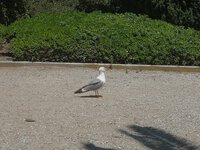 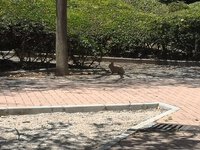 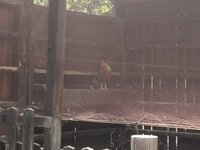 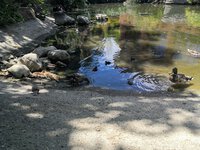 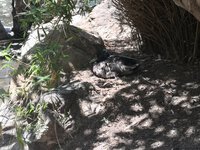 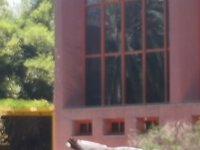 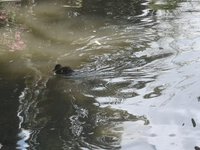 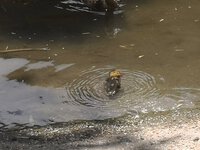 I’m glad you got to visit the park again.

What cute little ones!!

I hope the missing animals are safe somewhere.

I will go another day during the week and have a look for the Guinea fowl. It can take a while to find him and today was only a short visit before work.
Edit, I did take some video clips of the ducklings, I am merging them all together and will upload it later once it has finished processing

I’m glad you got to return to your happy place!
I hope all the missing animals are safe somewhere. I hate thinking of all the possibilities of what may have happened