OMG..how sad and just awful. I am so glad Goblin is in your loving care Kelsey. I know she will pull through with flying colors. Sending lots of healing energy your way!!

I forgot to mention that I tried to squish one of those black things I found in her water. It is definitely a bug of some sort. It had a hard outer shell and you could see some legs tucked under its belly.

I couldn't find any worms in her droppings.

Yuck, but at least they were dying and falling off!!!

Kelsey,
You are doing a good job. I will
pray for little Goblin. Hang in there.
Hope Goblin can see a vet on Monday.

How sad. Praying for the little one to pull through. Hugs to you for doing what you can to help her.

That pox virus scared me so much! My whole flock could be in jeopardy if Goblin has pox! I feel sick. I've of course been very careful with quarantine, but there is no way I can stop them from sharing the air in my house.

Please give me your opinions guys. I've been reading non-stop about pox and mites now.

It seems like the dry version of Avian Pox does not affect the growth of the nails. It forms growths, bumps and clusters on the feet. These start out as yellow or white and then turn dark brown or black quickly.

Here are some photos of pox:

Scaly mites does affect the growth of nails (and beaks). It also forms growths, bumps and clusters on the feet. These are white and yellow and stay this colour.

Here are photos of a Canary with Scaly mites on the legs:

Ok, I think Goblin has/had the Scaly mites. Here is a photo of Goblin's feet:

On a side note but if you get anymore of those little black specs that you can look at, with fleas those specs are flea poop and if you add alcohol to them they turn red because they are blood. That is a good way to check. Good luck with her!

Birds don't get fleas. Kelsey, it seems I remember there is something about the amount of times a canary can be treated with Ivermectin. I am thinking it's just a time frame between treatments. If Goblin does in fact have scaley mites, it is not a bad infestation. One or two treatments should do the trick.

I know birds dont get fleas. I was just stating that the mite poop shouldn't be that different than flea poop and she was asking what the black specs were. I was telling her how to check.

waterfaller1 said:
Birds don't get fleas. Kelsey, it seems I remember there is something about the amount of times a canary can be treated with Ivermectin. I am thinking it's just a time frame between treatments. If Goblin does in fact have scaley mites, it is not a bad infestation. One or two treatments should do the trick.

That is good to know
Avian Avenue Complaint Department

what do you cover her cage with? If you use a white sheet check it when you uncover her, if its got specs she has mites - Thats what everything said to do when I have read about mites, that you can see them on a white sheet

not sure if this will help or not - but to help with the wounds (it may tick her off or stress her out though So this choice is all yours if you think she can handle it or not) take a tube sock - for her size i'd use a baby sock or a small childs sock - Cut the toes out and make a "shirt" type thing out of it - Then when ever you put anything on her open wounds you can place this "Shirt" over top of her (you could even use a small square of gauze - this way the wound is covered - but can still get sufficient air (because your not taping the gauze on your just going to put a cloth over it to keep it in place) and she won't be able to get to it to pick at it or get any of the creams you put on it in her mouth (I'd be worried about her picking at it if you use neosporine or something and getting it in her mouth, plus that stuff is really greasy and icky

but It's just a suggestion - you might even be able to cut out the sides so her wings can be put through so she's not restrained completely just enough so she can't pick, scratch, rub the sores

Birdsforlife said:
I know birds dont get fleas. I was just stating that the mite poop shouldn't be that different than flea poop and she was asking what the black specs were. I was telling her how to check.
Click to expand...

I'm sorry, that sounded mean and wasn't meant to be. My apologies.

OMG! I am so happy that you took this little girl, may she continue to thrive under your care, and please keep us updated on her. I will say a prayer for her, many prayers.

ohmigosh, i just saw this thread. poor goblin. thank god you got her. how did they let her go on in this condition? i hope she gets better real soon

My neighbour adopted a canary, and it came with mites too. One symptom of mites are the overgrown toenails and bumpy feet.
We didn't even know that..but I showed off a picture of the bird on a forum and somebody told me he had mites.. 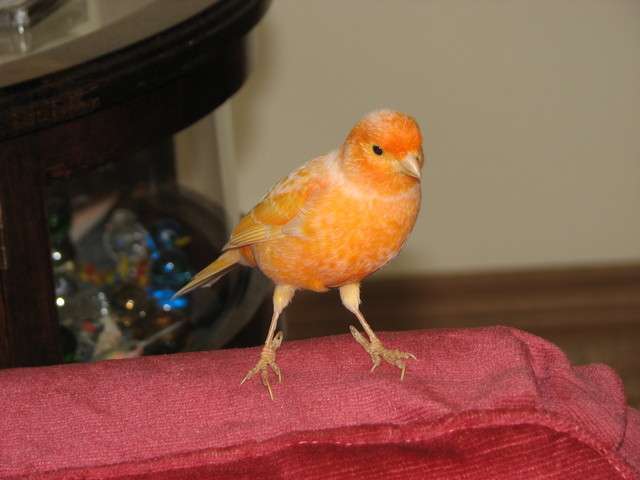 "Scatt" is available here at pet stores. Invermectin is available only by prescription from a vet.
My neighbour applied the Scatt 3 times with 2 weeks in between, and the mites seem to have disappeared. She also had to cut back the bird's nails.
I hope Goblin will be ok.

So how is little Goblin doing today?
I agree that Goblin has/had scaly mites.

I had a case with one of my re-homed budgie pairs recently where I had to treat the whole flock to ensure everyone was safe. Supposedly, the mites are contracted via bacteria at hatch time from mom or mates and lays dormant until the birds immune system is lowered/weakened. The pair I had that came down with it seemed a little under the weather since I had gotten them but I didnt think much of it as they were older and calmer than the others. But as soon as I saw signs of the scaly mites, I acted quickly. I seperated them from the flock. I couldnt afford the $300.00 it would cost to treat all 14 birds with Ivermectin, so I treated the birds with signs of infection by using a q-tip dipped in wheat germ oil, and rubbing it on the legs and cere where the crustations appeared. Doing this once daily for a week removed all the mites and they are all healthy as can be now.

Apparently, (as I heard from a friend at a pet store) the oil smothers the mites in their honeycomb like homes they've burried in your birds flesh. They die, and fall off. You have to treat for a week in case eggs hatch in the interum.
C

Oh good, so it mostly looks like Scaly Mites instead of Pox to the members here???

I've applied the Cayenne pepper paste to her back. She is picking at it but I've read this isn't a problem?

It has now been 48 hours since her first dose of Ivermectin. She is still perching fine, eating and drinking!

Karen - I've not found any more of those black things! So hopefully I won't have to perform the alcohol test to check. Thanks for the advice!

Carole - Yes, I will need to treat her again with Ivermectin 10-14 days after the first application. I'm going to aim for 12 days. So on 22 April.

Kelli - That is a really good idea! Unfortunately I think I'll stress her to death if I try to do that. At the moment I have to keep handling to an absolute minimum. Handling her for any longer than 30 - 60 seconds at a time makes her go into shock! Luckily she hasn't spent any time on the floor since the last time she went into shock. Her food and water are on the floor anyway though.

Sigrid - I really wish Scatt was available here in Australia! I hear it is so much safer than using Ivermectin and just as effective (if not more effective)! Ivermectin is also only available here with a prescription from a vet (if it is to be used on a bird). However, I just went to the local stock feed shop and bought a big bottle for $60. No prescription needed as they sell it to be used as a mite and worm treatment for cattle. It's the exact same thing though.

Kim - Glad to hear your flock is alright now! Ivermectin is readily available here in Australia from stock feed stores. Although it is obviously "use at own risk" if you use it on birds instead of the intended animals (cattle, horses, goats, etc.). I've never had a problem with it before and I've used it on everything from Budgies, Button Quail, Lorikeets, Finches and now Canaries.

I'm pretty certain that we dont have Canary Pox in Australia.