Pictures Umbrella Cockatoo looking for perfect home in the Midwest.

Hi everyone! This forum was recommended to me as a possible place to find a forever home for a wonderful bird.

I want to start out by giving a little background on myself. I grew up with an umbrella cockatoo and have a giant soft spot for these birds. I’m an animal lover and primarily involved in dogs professionally and as a hobby. I’ve always been active fostering, mostly dogs and cats, but I did help another cockatoo find a home a few years back.

Well, the other day I stumbled upon a lady selling her Umbrella Cockatoo over Facebook to the first person to show up and take the bird. My bleeding heart melted and there went the last part of that month’s paycheck!

I picked this beautiful boy up that night. He has a medium sized cage, not tiny but not great either, with not a *single* toy. Just two perches and a bowl of seed mix. Amazingly he hasn’t started to seriously pluck, though he has shredded the ends of his feathers, so his wings and tail are short. It makes me hopeful though, since he hasn’t been pulling out many feathers or self mutilating, that he’ll be able to grow them back!

According to the family, he is about twenty eight years old. They impulse bought him four months ago and in that time decided the whole thing was a bad idea after all. I have no prior history on this bird. He is an absolute sweetheart though. Since he’s been home with me, he hasn’t bitten a single time. He’s a good communicator and I went extremely slowly, gaining his trust one day at a time until he would finally come out and sit on top of his cage and let me scratch his head and neck, to finally stepping up on me and hanging out on my shoulder. He loves cuddles, and will nibble and manipulate my fingers so gently. He’s doing amazing switching to pellets and primarily eats them now without fuss. He loves shredding wood! He is a normal cockatoo and loves to scream. He has gotten very attached to me even in this short time, and is very affectionate. His favorite person in his last home was a man, as am I, so he may prefer men... however he does not seem to be directly aggressive towards women, so I believe he could do well with either.

I honestly would love to keep him, and he’ll be here just as long as he needs to be, but I worry that over all it won’t be fair to him. Having seven dogs sucks up a lot of time, along with working and being active in dog sports.

However, I am absolutely not letting him go to anyone who is not able to provide this guy an amazing forever home. References/ contract/ possible home visit/ fee/ etc. Are MUSTS! He is located in Wisconsin, USA.

I am tentatively beginning to look for a cockatoo experienced home for this very very special guy. I don’t want to post him too publicly for fear of being flooded with average pet people who are in no way prepared for a bird like this. He is not going anywhere unless I am 100% certain that his new home will be able to provide him even better care than he receives with me!

I don’t know just how many homes he has bounced around, but he deserves a happy ending. 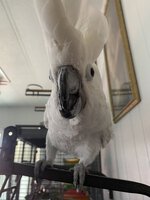 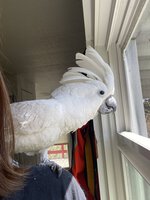 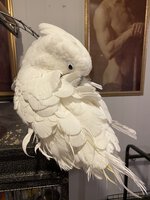 Wishing you luck in finding a solution Lenny

I hope that he manages to go to a good forever home but feel better knowing that he'll be taken good care of while waiting for a permanent owner, pls keep us updated on him!

He looks like a beautiful bird and from your description, he is. I hope you help him find his forever home but I suspect you may have a keeper.
I love AA for the many people I can call friends and family. My AA family has given unbiased opinions, has cried with me in my sad times, rejoiced with me in my happy ones and laughed at me when I laugh at myself. And, as more than one person has said, my fids aren't "just birds" any more than all our other companion creatures are "just a ______".
You must log in or register to reply here.