About a week ago, I had a friend who works at a vet clinic bring me a young rainbow lorikeet chick that had been brought in off the street and was due to be euthanised since none of the staff had the ability to care for it.

I was expecting the worst but he’s actually very energetic and playful! He appears healthy.... but he just has a very weird combination of traits that I just can’t figure out.

For starters, I can’t determine his age! He is mostly covered in grey baby down, except his head and shoulders have normal adult coloured feathers. Everywhere else, there’s not a single pin feather even developing!

he has the baby black beak and eyes, so he’s definitely young, but he is super independent. He’s hopping around and never makes a shrill begging cry. I had to give up on hand feeding because he just wouldn’t accept it and initiate feeding behaviour. Then I realised he was fully capable of eating himself? Now he’s eating lorikeet mix and I can see his crop get full each time, so I’m not worried about feeding anymore!

His feathers are very concerning because I’m worried he’s either been stunted or has parrot beak and feather disease. All the wild lorikeets I’ve seen with PBFD normally have full adult feathers but specifically lose their tail and flight feathers causing them to run along the ground. Meanwhile he is fully feathered, just with down!
either way, I’ve isolated him from my other bird until I figure out what’s going on.

Obviously a vet visit is due but I was just wondering if anyone could take any guesses! No matter what I’ll just continue to care for him though; he’s got so much personality and is very easy to look after. He might just have some special needs is all. 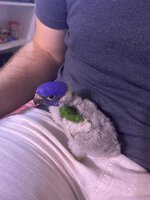 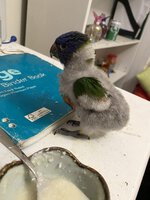 He is absolutely adorable! Thankyou for taking him in!!

For the PBFD, you will have to run a test to get any answers.

I don´t know any members who are well versed with lori chicks (do you @expressmailtome ?)

For now all I can say is to hang tight for the tests, and carry on caring for the little guy as you are. Glad he is eating with no issues. Keep a log of his AM and PM weights to monitor.

Take care between the baby and your own birds, changing your shirt, washing hands to elbows etc (I think you already know this though )

Sorry I can´t be of more help, hopefully someone else will know more

Sorry I can’t help, but hopefully someone will come along who can.