hello, this is my first time posting here and i was hoping to get some quick advice about lovebird behavior!

i have a young lovebird around 10 months old, assumed male as he's not very territorial nor does he know how to shred paper, but i don't actually know for sure yet. he wasn't hand-raised and i've only had him for around 5 months but he's target trained and already knows a few tricks!

he was obviously afraid of hands and a little bitey towards ears and things but i've been working with him every day and now i can usually ask him to be gentle if he bites too hard.

lately though (he's been going through a molt and i'm sure spring hormones are a factor) he's started this strange behavior of aggressively asking to be pet/preened? he's never let me pet him before, but now he'll perch on my thumb and force his head and face into my other fingers and start nibbling and pulling my fingers down into him. he'll bite harder and harder until i scritch and rub his head and cheeks but then gets flustered after a while and will bite because i'm touching him, so i'll stop and he'll get mad because i stopped lol.

he'll also drag and rub his whole face and back against the undersides of my fingers and nibble and pull them against him so he's being cupped in my hand almost but I try to avoid petting any part of him other than his head and cheeks which seems to be frustrating him. he just seems confused and like he doesn't know what he wants lmao. he'll fall asleep getting his little face rubbed he enjoys it so much.

i haven't been able to find anything about this behavior specifically so i was hoping my fellow lovie enthusiasts might be able to shed some light. 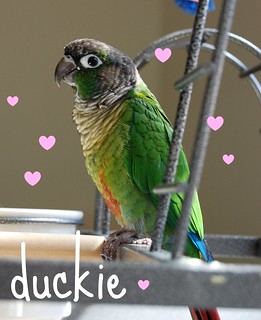 so he's probably just hormonal? good to know! i'm not sure how to best deal with this behavior, i want him to enjoy getting head scritches but i don't want him to bite me in order to get them.

he doesn't particularly enjoy it if i go to pet him without him asking either because he's still a bit fearful of hands, so i've been working on offering him treats in exchange for letting me touch him without being aggressive or biting. i don't want to punish him for asking to be pet, i just don't know how to show him how to ask nicely.

any training tips or suggestions?

not sure if i should move this topic to a different board or not.

Molting will do that. He's probably in a little discomfort and he's looking to you for ease. Being not that keen on cuddles he's probably forcing himself lol.
Birdy

Possibly hormonal, as he is at the right age for it, but also possibly because of moulting. It can be uncomfortable for them. My hen likes me to help her get the pin feathers, so perhaps you could try giving him a hand? It’s delicate work, but pretty easy if they’re willing. I just gently crush them between my fingernails to remove the waxy sheath. I have to use my pinky for the tiny head ones. Be mindful to only get the white sheaths, and you’ll be fine.
Charlie

lol! it does seem like he's forcing himself and that he's frustrated that the scary hands feel good.

thanks so much for all the advice everyone, i really appreciate it! this forum is wonderful.

lovebirb said:
not sure if i should move this topic to a different board or not.
Click to expand...

Maybe? You could post in the training or taming threads (or whatever you call it)? You're likely to get more help there.

Edit* The training court or the behavior byway

it sounds like he is molting and getting some pin feathers. as lunalovebird mentioned you can help him with removing pin feathers. pin feathers bothers them and they need help from other lovies or you to crush the ones around their head. just be gentle not to hurt him, he will not hesitate to warn you if you hurt him and you can be more careful. also you can increase the occasions for bath times.
You must log in or register to reply here.