Human skin is made of a thick layer of cells called a dermis, with a layer on top called the epidermis. Our skin burns in three degrees, or four. First degree involves only the topmost layer of dermis and results in redness without blisters. Second degree burns go deeper into the dermis and results in blisters. Third degree burns reach to the bottom of the dermis, resulting in massive tissue death and scarring. A fourth degree burn is very rare, and goes through the skin to damage the tissues underneath.

Birds have skin with both a dermis and epidermis, but it is often much thinner then our own. This is most likely because feathers protect and shield the skin from environmental changes. I don't know if anyone has ever done a burn degree scale for birds, but I'm fairly certain that burns that go through the skin to joints and bones would be third, or even fourth degree.

Early in December our sweet little Rhubarb was chewing her feathers due to itchiness from an Avian Borno Virus flareup with a secondary staph infection. This is not to say she was a naked bird. She had over-preened but no feathers were lost/pulled. I'd taken her to a vet and was still waiting to hear back on the diagnosis.

The vet gave me a paper printout that suggested a full spectrum light. I'd been reading about them for awhile and so I decided to go for it.

I purchased the ZooMed PowerSun combined heat/full spectrum bulb and mounted it 24 in (0.61 m) above her cage. The highest perch in her cage was another 12 in (0.39 m) down from that. This was a greater distance than the 14-30 in (0.35-0.76 m) suggested on the product label (http://zoomed.com/Library/ProductDBFiles/UVB-Reach.pdf)

She had it for only the two days between going to the vet and starting on the antibiotic ciprofloxacin. Cipro is known to sensitize human skin to UV and I didn't want to risk it.

Even that little bit was too much. Using this lamp was a HORRIBLE MISTAKE. DON'T USE STRONG UVA/UVB lamps on birds!!! Especially when they have damaged their feathers by chewing.

The first thing I noticed (after a bath on December 13th) was the blister on her right elbow: 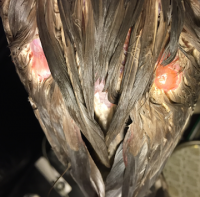 By the 26th this blister had became a large, angry scab and there was evidence of a small burn on the left wing:

As the scab appeared on her wing, a huge one also showed up on her back: 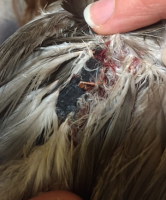 Thankfully our story seems to be headed for a happy ending. 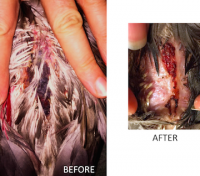 The "BEFORE" picture (taken December 25th) doesn't fully convey the true size of the scab as multiple feathers were included in it and make it appear smaller. It was an incredibly deep wound. The pale line between the legs of the backward-h scab at the bottom of the "AFTER" picture (taken yesterday) is her pelvis bone... the wound is still in the process of healing.

During our visit to the vet on December 29, he carefully removed the massive scab on her right elbow to see if there was infection underneath (high white blood cell counts) and to clean it out if necessary. The wound was so deep we could see right into the joint (see picture below). She was hospitalized from the 30th until the 2nd because her kidneys shut down from an interaction of ABV/medications (see Pictures - Metacam and Kidney Failure - A Rare Side Effect | Avian Avenue Parrot Forum for the full story).

When she came home from being hospitalized (day 6 in the time course above) the wound was still open and angry like on "DAY 0" and the vet suggested stitches once she was more stable. We immediately started using HEALx for birds on her back and elbow. The "Day 7" picture was taken about 12 hours after her first HEALx treatment. The wound on her right elbow had closed! The "DAY 14" picture was taken yesterday. The scab is shrinking, replaced by scar tissue that looks almost like normal skin.

With all that has happened over the past month, we feel very blessed to still have our Rhubarb with us. Please don't repeat my mistake! Knowledge is power! For more info on potentially dangerous vs. safe lamp brands/bulbs see UV Lighting for Reptiles: A new problem with high UVB output fluorescent compact lamps and tubes?

Poor baby!!!! Ouch, glad you were able to get her the care she needed & is recovering!

Thank you for sharing and the warning. Poor Rhubarb. You did everything right. I am glad he is healing well. One suggestion I have is try Manuka honey on the wounds. It worked wonders and quickly healed my Dexters' wounds.
When I was in search of full.spectrum lighting my avian told me to make sure that I did not use those for reptiles but ones specifically for birds as there was a difference. I also wonder if Rhubarb was also extra sensitive due to being immune suppressed from ABV? Either way I am so happy he is improving.

They call Me crazy like its a bad thing!

Avian Avenue cause being a crazy Birdlady is normal here

The flock at the Feathered Funny Farm!

I hope she continues to do well healing.

I have always been apprehensive about the use of these lamps, I have never used them for my birds and don't think I ever will.

Poor Rhubarb and THANK YOU for the warning. How hard for you when you were just trying to do the right thing!

Glad Rhubarb is on the mend now.
Opal

Thanks for the great post - I hope everyone pays attention and reads it.
@Holiday - Do you think this should be a permanent post?

Yes, this should be a sticky.

Hope your little one stays on the mend.

Thank you for this post. I was getting ready to buy lighting for my birds and this helped with my decision.

I'm sorry for your bird though.
I have a zoo!​

Poor baby I'm glad Rhubarb is feeling better and I hope he heals up completely. Those are really nasty burns. I wouldn't have thought one of those bulbs would have done that extensive of damage to a bird

I have that exact bulb on my gecko and it gets HOT since reptiles are cold blooded and need heat to digest food. There are special bulbs that remain cool designed for parrots. We use this full spectrum for Kiwi and it doesn't get hot at all: Full Spectrum 15w light bulb by FeatherBrite

Im so sorry for the wounds your birdie got. This is why its important to never use HEATED reptile lamps. UBV and USA lamp are fine if theyre not heated lamps.

Better to stay with birdie fluorescent lighting as its specifically made for birds.

Bokkapooh said:
Im so sorry for the wounds your birdie got. This is why its important to never use HEATED reptile lamps. UBV and USA lamp are fine if theyre not heated lamps.

Better to stay with birdie fluorescent lighting as its specifically made for birds.

Actually, no, UV lamps are not always fine. Parrots in the wild don't spend many hours under the sun so a large direct output of UV is harmful to them (vets have been seeing more cases of squamous carcinomas as well as burned corneas) if it's too close. Clamp-on lamps or floor lamps over a cage are both no-nos. The only safe light is the one in the ceiling fixture.

Never read about any of what you talking about. Any links?

Parrots spend a substantial amount of time in UVA/UV light in the wild vs in captivity where most get zero. So I find it odd that you say they dont.

How do your birds get Vit D? So little foods have it except for eggs and pellets and maybe red meats?

And shade covering (underneath leaves and branches) can have more UV lighting than being directly in the sun as the rays bounce. So even spending time outdoors in the shade, birds get a good amount UV.

Dangerous UV Light Snakes Its Way Into the Shade
G

some informative links.
Parrot Island--Articles
https://mickaboo.org/confluence/download/attachments/1179693/light.pdf this one states do not use avian specific bulbs as they are repackaged reptile bulbs.
i believe the only safe bulbs are fluorescent tubes.
Winged Wisdom Pet Bird Magazine - Bird Lighting Hotspots - Pet Birds

My bird gets his UV lamp for about 2 hours in the morning a few times a week and thats it. He goes right for it and enjoys it. I've noticed a very positive improvement in his energy levels since getting the lamp. I think theres something to be said about common sense with these kinds of products. A few hours a few times a week=not harmful. 12 hours a day every day=possible problems.
You must log in or register to reply here.