Please keep my sweet little cloud in your thoughts

I´m so sad.
I never claim to be a perfect bird owner, honestly I don´t think such thing exists. We all make mistakes, we all have things we regret. Even after all these year of birdkeeping, thinking I was doing ok, I find I have let one of my birds down. And I am so disappointed in myself.
I could quite easily not post about this online, but I feel I should share what has happened so that others know that things like this really do happen to us all.

I took Nube out of his cage this morning, and immediately saw something was not right. A few feathers sticking out, in a very odd position, and dark stains in two places behind him at the tops of his wings. I took him to the spare bathroom and turned on the tap, he did not want to bathe. I held him in my hand and as I moved the feathers, I was horrified. He had some sort of lesion, I could just see the dark almost black site, looked like dried blood around it. I could not tell if this was plucked feathers or a bite or what. I did not look at the other side, there was no point. I put him in his carrier and drove to the hospital.
Not thinking of appointments, I knocked on the door, there was a poster stuck to it informing that an appointment is neccessary.
Luckily, the side window opened and the avian vet poked his head out when I told him what was going on, he took the carrier in, and took a look. Nube was really good for him, and didnt seem too frightened. He has two wounds, one side is infected. The vet showed me the injuries, and there was no bleeding or weeping, but I could see the yellow where it was infected.
I don´t know when these injuries appeared/occurred, but they clearly weren´t done today. And I did not notice. I just wish I had seen this sooner.

The vet sprayed (I think an aneasthetic? or antiseptic) on the areas. Nube has an antifungal, an antiinflamitory drop to take (the vet gave him a dose while there), and an antibiotic too. We have an appointment next week to follow up. If Nube doesn´t stop picking at the sites, he will need a collar fitted.
I asked what the cause could have been, whether he thought this was all Nube or was this Lapis that did this to him. Vet cannot confirm.
I told him I saw Lapis attack Nube yesterday, which I broke up in a second. And that she had had 4 (plastic) eggs until a week ago.

Either way, they have been split up. And it is so saddening to see them apart for the first time in their lives. They have never been an hour without being by each others side before.
They are in the breeder cage with the divider in. Unfortunately it is very small, but this is not permenant.
Lapis is angry and lashing out.. she is completely unapproachable right now.

I hope he recovers soon and does not need a collar fitted.
This is just a horrible situation both physically and mentally for him.

I am so sorry. I hope Nube gets better. How nice of the vet to have taken a look in your time of need.

I’m so sorry, Zara. I hope the meds and treatment can heal him up quickly. Thank goodness you did notice and that you rushed him over to the vet. You are a good birdy mama.

Ali said:
How nice of the vet to have taken a look in your time of need.
Click to expand...

This is the vet that saved Pepper. He´s the best. As I was there today, a man rushed their canary over in a box and handed him to the vet through the window, telling me how fantastic the vet is. He seems to have quite a good reputation.


fluffypoptarts said:
I hope the meds and treatment can heal him up quickly.
Click to expand...

I really hope so

I'm glad you were able to get him seen! Fortunately wounds usually heal really fast on birds, because their metabolism is so high. Sounds like you're doing everything right.

enigma731 said:
Fortunately wounds usually heal really fast on birds, because their metabolism is so high
Click to expand...

That is a relief to know!
I did notice the dove chicks (Peppers) crop stitches healed super quickly, but I didn´t know if it was because of the species or the age etc.
I have fortunately never experienced my lovebirds with serious injuries before.

So glad you did see it and ran him to the vet.
Praying his recovery is quick.

Zara said:
That is a relief to know!
I did notice the dove chicks (Peppers) crop stitches healed super quickly, but I didn´t know if it was because of the species or the age etc.
I have fortunately never experienced my lovebirds with serious injuries before.
Click to expand...

Nope, that's typical with birds! And actually it may very well be that he only had the wounds for a day or two before you noticed, given how quickly things progress with them. Think about how fast their feathers grow -- wounds heal on that same time scale. I've been amazed at how Pattie's amputation site is healing, it often looks notably different just from morning to evening in the same day.

macawpower58 said:
So glad you did see it and ran him to the vet.
Praying his recovery is quick.
Click to expand...

Thankyou.
I was thinking to myself yesterday after reading your thread about Solomon, that; boy I´m so lucky I haven´t had to go to the avian vet during this whole pandemic.


enigma731 said:
Nope, that's typical with birds! And actually it may very well be that he only had the wounds for a day or two before you noticed, given how quickly things progress with them. Think about how fast their feathers grow -- wounds heal on that same time scale. I've been amazed at how Pattie's amputation site is healing, it often looks notably different just from morning to evening in the same day.
Click to expand...

Thankyou, this is very reassuring!
Given his colour, I know he did not have those stains last night when I put him to bed. So that area with the blood on one side could have been done overnight last night, the infection is on the other side (no blood on that second side).

So it's even possible that he had some kind of super minor puncture wound, or maybe even a pin feather that got infected and then he picked at the area because of it. I definitely don't think you should beat yourself up about it. They are SO good at hiding things like this.

I'm so sorry! I hope he gets better soon

Don’t beat yourself up over it. I’m pretty sure most of us do not inspect every inch of our birds everyday. When you noticed something off you took action and that is what counts. I hope nube heals quickly

They hide their illnesses well to avoid being singled out and eaten. Sounds like you got him in immediately to a good vet so he'll probably be fine now so hang in there and love and take care of him and yourself.
K

Sending good thoughts that he heals quickly and he and Lapis can be together again.

This was when I saw something was off , 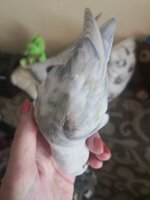 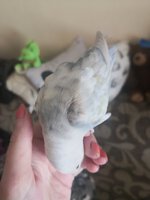 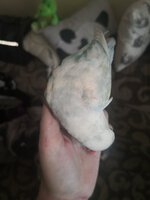 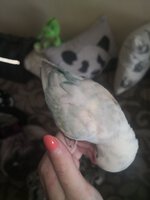 After he'd been sprayed it was a bit more obvious, 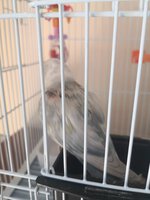 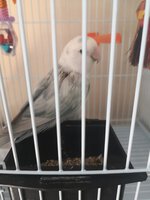 The infected area is large, about 3cm (which is big for a little guy)

This is the window, quite handy they have a window that is easily accessible 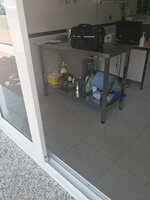 Resting in his carrier after medicine 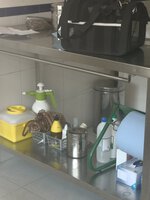 This is his home for a few days 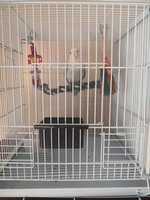 Though he won't be in it much because its easier to stop him picking while he's not in there.

Poor little Nube! I hope that he heals quickly and can be reunited with Lapis. You're certainly not a bad person - you noticed a minor sign that something was wrong, checked it out and immediately got him to the vet. Like @enigma731 said, it could have happened overnight.

I don´t think that I am a bad person or bad bird owner, these things happen but I´m still annoyed at myself... I think that comes with owning birds? when something happens we blame ourselves. I can´t help but feel I let him down for not noticing sooner, even if this did only happen yesterday.
Sucks that they are a pair, and this is more than just an inury, there are emotional problems now.

Sending all my thoughts for his quick recovery.

It’s impossible to predict or expect these events, you’re still a wonderful bird owner; you’ll do what’s in both their best interests and they will adjust with time.

Aww @Zara This is so upsetting to you because you're a great bird mama. I hope your little cloud makes a quick recovery and is able to get back to Lapis!