My budgie is regurgitating on his bell?

Hi there, my male budgie Arei is hormonal ( first time ) and I am not sure on what to do. Whenever I take his entire toy out to clean because of the mess on it, he follows after it and screams / chirps very loudly almost sounding like he’s agitated, but then the second he is near it he calms down and starts beaking and regurgitating seed all over it. I have never seen him mount the bell, or attempt to, so I’m not sure if he considers it his mate. The smudge on the bell is regurgitation. 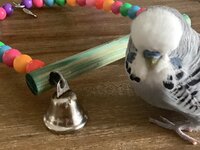 yeah, hes an only budgie, but I take him out everyday, give him tons of attention, we do tricks so he isn’t that lonely.

I'm not super sure what you should do, but @Lori D Pert may know.

Kiryuter said:
yeah, hes an only budgie, but I take him out everyday, give him tons of attention, we do tricks so he isn’t that lonely.
Click to expand...

I am sure you give him plenty of attention, but it's my personal opinion that people simply cannot provide the same level of companionship that another bird can.
The person I tagged should be able to help as she has owned a single budgie before.

ty, ill check them out.

Budgies will regurgitate on reflective surfaces because they may think it’s another budgie. before I got Winston and I only had Oliver he used to have a mirror and would get very territorial of it since he thought it was another bird. I got rid of all reflective things after that and soon after got my other budgie Winston!
Oliver - ty, ill just monitor him and make sure he doesn’t get too intense with it

Kiryuter said:
ty, ill just monitor him and make sure he doesn’t get too intense with it
Click to expand...

Lovebirds may be more apt to engage in courtship with inanimate objects simply because they are more apt to in general with objects/birds. What genders there are may influence this too. Budgies are more apt to have same sex friends, I believe.

When Cloud & Ernest weren’t together Ernest would talk to bells, regurgitate to a swing, & have his way with it. As soon as those two were together this stopped.

Personally, I would remove the bell & all shiny objects. My two ex-singletons have none. The other eight are fine.

The problem with ‘filler’ behaviour is that they’re never satisfied, like they would be with a real bird.

In Ernest’s case, it meant that while the other budgies were happy to forage, play, sing, etc., Ernest just fixated on two objects & displayed other captive stereotypies. My budgies regurgitate to their buddies, but not all day, as Ernest did to his The lack of reciprocity left him desperate.

I’d also be interested to hear what Lori says.

Ernest was housed solo a little over 11 months. Cloud was almost a year, but the fact that he’d had a buddy previously seemed to make all the difference in his adapting to the single life.

It is most likely his reflection in the bell that he's attached to. If he's becoming overly obsessive with it maybe try a different style of bell or a new toy to distract him but I would remove it for now. I have had both males and females do this (solitary usually but not always) and I always remove the offending toy and provide a new one along with lots of attention.

Like others said, it’s just the reflection, not even a hormonal thing. My two male budgies would feed each other almost daily. They were not hormonal like ever that I remember. They never humped anything. My cockatiel however… lol.

ty, it’s a perch but I can just take the bells off
I

Try to get him some female budgie.

My newest budgie, Rudy, will regurgitate on anything. Shiny bolt holding his beak conditioning stone in place, bell of a toy, mahogany pod....

He lived alone in a tiny cage for his first 4 years. He now has a flight cage to himself, but is still learning about his expanded world. I'll hopefully get one more budgie in the next 6 months so that I can let all 4 of them live in the same cage as a flock. The dynamics of 3 budgies is not pretty in my experience.

Kiryuter said:
ty, it’s a perch but I can just take the bells off
Click to expand...

Sounds like a great idea most bells come with issues anyways, birds can get their beak trapped in the ones with a flat clapper ( the thing inside the bell).
I know others may have mentioned to get another bird, if you do, you would need to quarantine the other bird for a month for safety. Also, if you decide to, I would get another male, males usualy get along great! Female budgies sometimes are a bit bossy.

even though we cannot provide the same level of companionship as another bird, as long as you give your bird attention daily, and keep it in a room where you are most likely to be, provide it with toys and stimulation, it will have a very happy life without a buddy companion in my opinion.
You must log in or register to reply here.