to our house in a few months? i'll give you a hint... they're LOUD!

I will not guess, I will say a Sun Conure!
If they are on sale buy a lot of ear plugs.

I couldn't stand the sun conure voice pitch. Far to shrill for me! but these little gremlins are just as loud. It's going to be a big change from my quiet and calm guys! but I've loved them for years so now that we're finally getting the aviary built... i'm so excited we can bring one home!
Last edited: 5/4/17

They're beautiful but no. I'm mean because just hatched chicks all look pretty much the same... (ugly baby dinosaures if you ask me.

) i'm thinking of updating this topic with more baby pictures as they grow so you can keep guessing. You can help me along in these months of waiting, through the official reservation when I get to chose THE one and see them evolve into cute balls of feathers. I hope all 5 of them will thrive and get to grow into strong gorgeous birds.

how about a blue crowned conure

I say we wait for the next photos and see!

Ok so i'm definitely not patient enough to wait for more photos from the breeder for my guessing game... so here's one of the next stage of baby mistery conure development from the internet. Does it help?

But wait a minute.. Small eyes and big feets, can it be a Patagonian?

Ah haaaa! we have a winner! if my ears give out, I'll send it your way. Those big feet were a good clue.

If you look closely and know what to look for, you can guess the eye ring shape to. I can't wait for them to grow so I can visit! Patagonians have always been my favorite specie with bigger Macaws. (Although I wouldn't exchange my pis for any bird! ) They remind me of red front macaws and they're the perfect size to be able to share their space and big aviary with Apache and Falcon without it being dangerous for any of them. I love their lively personality to. The patagonians I met (adult flock of 4) were adorable, very loving birds and absolutely gorgeous in flight.
Last edited: 5/11/17

Hi avian avenue! as usual with me, it's been a while...

just thought I'd update the patty situation. It's been quite an adventure as we finally decided against the first clutch we found ... they were store raised and they absolutely wanted to clip their wings and were behaving more and more like commercials throughout our conversations. Patagonians are rare birds around here so we were reluctant to pass these babies up but we didn't want to encourage these people either. I saw a few sick looking eclectus parrots one day with a 50% discount and 10% on the cage if you buy the bird with it... I hate, hate, hate that. They're living things, not furniture and those birds were obviously not doing good with so many people around all day. They have a breeding facility, they could've kept them somewhere else until they were doing better... but no, they're actualy selling them in that state. I don't know... I juste hate that business and profit comes ahead of animal welfare. I also discovered they initialy lied to me and didn't test the birds before selling them either... so no.

Anyway... I thought we would have to wait until next year after calling so many breeders and getting the same answers... either they don't breed them anymore (to loud for most people so not in demand) or they havn't got any available... and the few I went to see, I didn't like. (the breeders and their setups, not the pattys.

) BUT... life has a way of suprising you when you least expect it.

We had stopped looking for a while when I received an email from a breeder I had contacted when we began our research 5 months ago. He finally has an available baby since a person changed their mind at the last minute.

It's just the one and I don't even know if it's male or female yet but it'll be weaned at the end of the month/beginning of September and... it's ours.

I'm so happy because this hobby breeder is everything we hoped for. He's great, he even free flighs his Patagonians daily! they're beautiful and healthy. He has nice roomy setups with plenty of activities and from what we see, takes great care of them. We're super excited! our patience has been rewarded.

I'll take pictures when I go and visit her or him in a few weeks. 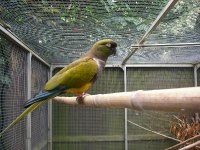 Ella.pi said:
I'm so happy because this hobby breeder is everything we hoped for. He's great, he even free flighs his Patagonians daily! they're beautiful and healthy. He has nice roomy setups with plenty of activities and from what we see, takes great care of them.
Click to expand...

It is only that kind of breeder that you should buy from, excellent choice!

What gender are you hoping for?

Cant wait to see more pictures of your new baby.

The above pictures are of the parents. The baby pics will follow soon.

Thanks! I'm savouring our last month of peace and quiet. It's going to be a huge change because Apache and Falcon are so quiet we hardly realise we live with parrots most of the time. Apache is known to love competing with loud noises from time to time so i must admit i'm a little apprehensive. Sounds like a screaming fest recipe! I must be a little insane.

I've never had a hyperactive clownish bird either, it's definetly going to liven up our house.

I was hoping for a female just because I have a perfect name in mind.

I really like Chiloé, like the patagonian island. I would have to think hard for a patagonian related male name if it's a he. But other than that, I have no preference. Especially considering that I like to have my birds in pairs so unless our new feathered friend closely bonds to one of my boys, (wich I doubt no matter it's gender seeing as they're so different and my two are already close.) I'll be adding another patty to the flock in the future. I'm sure I'll end up with a male and female at some point.

I'm concerned about jealousy issues with Apache to. He was a bit of a bully to Falcon those first few months so i'm expecting the same kind of behaviour from him. Falcon's a baby and a shy laid back one to so he'll stay away from conflict. Maybe being young will help them get along. I know the patty won't be causing trouble as a baby but when they all mature... we'll see how it goes. Their huge outdoor aviary will be finished by then, it should help! for now, Apache is still very sweet with us. No male pi agression, he's a very predictable trustworthy bird even though he's suposed to be in his terrible hormonal age. (not that sweet if you're a wild child or a stranger! little raptor! but still gives plenty of warning.

Thanks! they are so stunning in flocks and in flight...

And here is a baby picture of one of the little ones I was hoping to adopt... 5 weeks old fuzzbutt.

The Patagonia Conure are a beautiful species, congratulations on your new flock member.
You can start anew at any given moment

Life is just the passage of time and it’s up to you to pass it as you please​
You must log in or register to reply here.