Sorry for formatting or if anything sounds weird, I'm on mobile and also sobbing right now.
I posted on these forums before a few months ago to ask about rehoming my birds. I ended up moving them to a different room and keeping them.
Yesterday before work I woke up from a nap and heard weird noises coming from the room I keep the birds in so I decided to check on them. One bird (Draco) had another bird (Bucky) pinned down on the bottom of the cage and was mauling him. It was bad. All of the feathers on his scalp were torn off and he was bleeding from his head, wings, and feet. I ran to the vet and had him there within an hour. They said he should be fine because he wasn't scalped and to just medicate him for a week and keep him warm and covered and isolated. I had him warm and covered and isolated and planned on cleaning out my room so I could keep an eye on him through his recovery. I woke up this morning and he was dead.
I'm fricking devastated. He was my first pet. He was supposed to be with me until I was 30 and I'm only 18. I feel like I'm gonna throw up. Please don't offer me your condolences because it will only make me feel worse. This is entirely my fault. There were a million things I did wrong. I could've never gotten any other birds and had Bucky living alone and pampered like he was perfectly fine for the first year and a half. I could've moved my stupid record player out of my room and prioritized the birds and kept them in there so I would have seen this happening. I could have isolated Bucky when he kept getting into little fights with the others. I could have checked on them more often. I was really slacking on checking on them. It's been a year since I spent time with Bucky out of the cage. A year. A whole year. I could have just not been asleep while this whole thing was happening and caught them right when it started. I woke up and slept in for an extra few minutes before hearing and checking on them. I could have just gotten up this 5 minutes earlier. This is my fault more than it is Draco's.
That said, I hate Draco. I've only had the rest of my birds for a year and a half to a year. Bucky and I had a different connection. He was all I had when I was at my lowest. Bucky kept me from killing myself more than a hundred times over. It would be wrong for me to set Draco free and let nature take its course, right? That would be cruel. I may hate and blame him but he was an animal acting on instinct. I don't know what happened that cause this. Bucky and Draco have always gotten along fine. They were mates (Bucky is female, I was just told he was a male and kept referring to him as such) before I got my fifth bird that Draco decided to be mates with instead. They may have fought because of this fifth bird, Audrey. She's always been aggressive and I was considering rehoming her but I felt like it would be cruel. Getting her and not rehoming her were two more things I did wrong that could have saved Bucky.
I think I'm going to rehome all of my birds. I could keep Lola and Whizzer, who weren't involved, but I don't think I could emotionally handle having them around. I don't really want any pets anymore to be honest, but I have a cat and two rats who I won't be rehoming just based on this incident.
I'm not sure what I'm looking for in posting this. Advice for how to handle it. Confirmation that I should not set Draco and Audrey free and let nature handle it. Advice on my decision to rehome all of them.
I'm never going to be the same. Bucky didn't die old and comfortable like he should have. He died young, suffering, and alone. I can never forgive myself for this.
TLDR; My bird Bucky was killed by my bird Draco. I want to set Draco and another bird who instigated it free but I know that would be cruel and unfair. I'm going to rehome all seven of my birds because I can't emotionally handle having them after this. Please don't offer your condolences because they will only make me blame myself more.
Here's a picture of Bucky 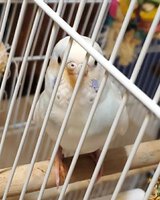 I will not offer any condolences as you ask I have seen budgies attack other budgie, to the point of death. Its not unusual. As you probable they pick on the weakest one. Time will soften the pain in your heart but you will of course remember this tragedy.

Please do not let your birds fly out the window. There is no freedom or safety there for a bird that has been a companion. It is better to re home.

I agree that setting them free is a cruel and heartless option. I would also wait a few days until you’re not feeling so rash, just to make sure you are making the right choice for all of them. Also, you owe it to them to take your time and find a loving home.