Hello, my quaker's around 6 weeks old and his/her name is kiwi. 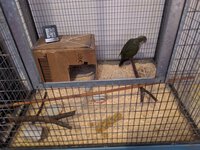 I moved him/her into a temporary cage (that belonged to the parrot i had as a child, but i'm currently saving up to buy a better one). He/she's really enjoying the perching activity, and while he/she is becoming more skilled i'm moving higher the perches. As you can see he has a cardboard nest, and my first question is about that: when you think would be the most appropriate time to remove it? The second question is about the room temperature, as you can see i have a thermomether inside the cage, and the temperature is always around 30 C (86 F), sometimes i've caught him panting, but even during the night the temperature stays around that. The only thing i have to cool the room is the a/c, but i think it's dangerous for parrots, isn't it?

The third question is for the "bowls". I'm currently using jar caps in which i always leave fresh tap water and pellets, and during the day i also leave another one with veggies and fruits. He completely ignore the water, which i know it's normal for now, and eats his pellets, millet sprays and fruits/veggies. My concern is about the bowl which he/she hates to the point he/she become aggresive, as you can see from this video.
Normally i put the "bowls" while he/she is not in the cage, and when they are on the ground, they doesn't bother him/her anymore. I should keep doing so, or should i change them? What else could i use?
Thank you for your time

EDIT
To avoid giving room to misunderstanding, he/she's not scared of my hands at all.

ciaciu said:
when you think would be the most appropriate time to remove it?
Click to expand...

When he´s comfortable sleeping up on a perch and moving around his cage you can remove it. It´s nice to keep it a short while while he trasitions to cage life.

If he´s panting lower the temp. He has his feathers now so can keep himself warm in cooler temperatures.

Do you have a water bowl that you can attach to the cage? Fill that with a little water and see how he gets on. I dip my finger in the water in front of the birds to show them it´s water.

Sorry if i answer that late, i didn't have much time during this period. He's still going strong! I purchased a rope perch which he loves and removed the nest some days ago because he wasn't going there anymore. I have two proper bowls attached to the cage now, and one drinking trough. Also when he's outside the cage, i put a plate with water near him, so that if he wants he can bath himself, and he's coming closer everyday.
I have some other question though. When you suggest to start training him, i'm currently using an hazelnut grain as a treat for when he steps up, but i think it's too fat to use as a training treat also for other tasks.
Furthermore, when i can start to introduce my family member, so that he can knows them?
You must log in or register to reply here.