Walking the walk (with MC) **UPDATE**

His follow up from the surgery (that didn't happen) was last night.

He still has his stitches. Vet said they will probably dissolve in another week.

Bottom line is if we attempt another surgery after the 30 days have passed (with 2 vets, etc), he only has a 25% chance of surviving it. Another Amazon will have to give up their blood because MC will require a transfusion to even attempt to make it through the surgery. We don't know if the tumor has fingers and is in the carotids already. This tumor originated in MC's blood vessels. The original surgery doc used a radio surgery/laser, no scalpel. Should have been cauterized but instead, bled profusely.

Radiation is not a cure. It could possibly shrink the tumor but radiation comes with its own issues: burns, skin issues, possibly bacterial infections (and those infections can be fatal in MC's case).

Vet says he probably won't pick at the wound (unless it gets infected or inflamed). He reminded me that he doesn't chew on his feet/toes. I shouldn't freak out when he preens his feathers close to it (yes, I have been).

He doesn't know if the tumor is cancerous. He can only tell that with biopsy and again, anesthesia and knock him out, then grab the biopsy and close before he bleeds out.

I asked about other tests. Xray might show us if its spread throughout his body and is malignant. CT scan is available in St. Louis at another location but no one can be in room with the parrot. MC would be out for 30 minutes during this. They could do auditory and heart monitors and can stop the CT and go in to him if needed but again, that all takes time. Time that I wonder if MC would even have if auditory and heart monitors are giving out alarming signals.

If we walk right now....... eventually he will get lethargic, weak, decreased eating, and basically an infection in his blood can cause him to lose his life.

We have no way of knowing how long he can live. Doc kept stressing that he had no idea how rapidly this tumor is growing. After hubby pressed and twisted words continually, doc gave an admission that it could be 3 to 6 months.

I'm faced with the decision to put my little guy through tons of pain to try to save his life with pitiful odds or let him die with dignity at home, where he's content. Hospice for MC for lack of a better word.

In my mind, I see Dr. Orosz at the seminar in North Carolina on aging in parrots. She described a parrot that kept coming to the clinic because of its owner trying to keep him alive. Dr. O said the parrot just wanted to die but the owner wouldn't let go. The vet was crying, tears silently sliding down her face, as she described the parrot. The parrot was eventually put to sleep.

So I'm crying now and getting off of here for a while. I love MC dearly andI despise making decisions. It's not my strong suit at all (I beat myself up better than anyone out there).

Remember, we have no idea how old he even is. Since he's wild caught, he could be older than Secret who is at least 42 years old from a picture I found in family archives.
There is a great deal of wisdom available here on AA from experienced bird owners. They have helped me to understand that even a "clueless" soul can muddle through with the right amount of guidance.

I'm so glad that your vet gave you a range of choices for MC. Without that knowledge there is no way you can make the right decision for him. When we take these birds in, we take on the responsibility of making decisions for them, actually throughout their entire life, but we need to have the best information available to do that well.

Dr. Driggers told me yesterday about a small animal oncologist in Phoenix who is putting radioactive patches on the skin of birds (much lower intensity than the machines) and it having success shrinking tumors. There are so many advances out there and sometimes we have to dig. Every vet can't know everything.

Maybe Chemo would help MC seeing hat the illness has originated in the blood stream.

You know me Clueless - I don't give up easy.

I love AA for the many people I can call friends and family. My AA family has given unbiased opinions, has cried with me in my sad times, rejoiced with me in my happy ones and laughed at me when I laugh at myself. And, as more than one person has said, my fids aren't "just birds" any more than all our other companion creatures are "just a ______". 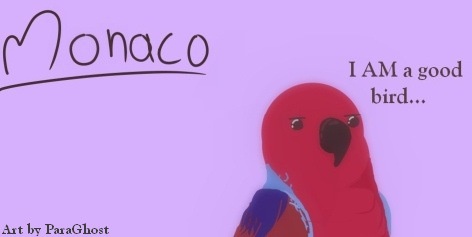 At least you have options. One day at a time.
I love AA because of the community and the sharing culture here. I get invaluable information on training, enrichment, diet, and many other necessities to creating an environment both the people and parrots in my life enjoy. On any given day, I can find a recipe, a cool DIY project, or a sympathetic ear. AA has become an integral part of my day.

I'm so sorry. Sending prayers to you both.

(And godmother to Sunshine) Thanks Conure101 for the siggy!
C

I am so sorry. My thoughts are with you as you try and make these difficult decisions.

Coco had a CT scan.
She had an Avian Vet present, an avian anesthesiologist, and the CT operator.
Her Avian Vet and staff took her to a dog/cat surgical centre to do the procedure with her.
So I don't really understand the CT part. I was so scared, but it saved her life, they were able to diagnose correctly.

Not saying you should, but I just want to make sure you have accurate info or there is options. I would think the same could be accomplished with yours. Or maybe, I didn't know no one was in the CT room. They said it only takes like a seconds, Vet said it is really fast, for the CT to do its job.
Avian Avenue Complaint Department

I have nothing smart to add, but I am still thinking about you and MC

Whatever the decision, you are all loved

"They are the windows into all of wild nature, and our own wild nature as well." L. Joyner

One day @ a time & take a little time to process the information. Maybe, get a second opinion. I know for a fact if you take the time & process the information that you will be able to make an educated & calmer decision. I went thru this w/ 2 kitties that got cancer from a rabies shot. They said 1 of those w/ a family is rare, but 2 was unheard of. You & the hubby will work out what is the best decision in a few days or a week. Maybe during that time you can consider a test like the CT scan which is pretty non-invasive, minus the anesthesia.

My heart is w/ you, your family & flock.

That sounds really tough. You know MC best, and we all know how much you love him. Whatever you decide is best for him, you have my support and you and MC are both in my thoughts.

Oh my goodness @Clueless - I know what you mean about decisions not being a strong suit. I'd be the same way, bless your heart. I am praying you will know you have our support and encouragement no matter what the future holds, and MC knows you love him no matter what.
Mommy to Fergus

I am crying for you and MC. Please remember that we will all be here to support you. Good luck in any decisions you make, and understand that you have given this bird a wonderful life. One that he may not even had had in the wild. We all have a time, and when MC's comes, remember his life and the joy he had.

@Clueless The tears are flowing, I'm sooo sorry it has come to this. One day at a time sweetie. When my Bugsy got sick, I promised myself I would make the right decision. Bugsy too was wild caught and free flighted, I could have kept her at the bottom of her cage, and medication the rest of what life she had. Trust me I know what you are going through. But for right now he is with you and you are the best person for him.

Thank you for keeping us posted. To be honest, I didn't even know parrots could get tumors.

I know decisions are hard but when it's time you will do what is right in your heart.

You and MC are in my prayers and thoughts.

Six year ago, Mickey hit his head when he fell off our table (he was also a very old, neglected rescue) and developed a stroke. We took him to our vet, who pumped him with steroids. It worked wonders - for a while. Then Mickey started a decline.

It pained my wife and me sooooo much to force feed him, hoping he would recover. When it finally became apparent that he wouldn't, we took him back to the vet to have him put to sleep. I couldn't watch him suffer anymore.

One of the most difficult, but proper, things to do. Especially for me - I'm not a real strong person, either.

I hope it doesn't come to this with MC. But if it ever does, I hope you can draw some strength from this response to do the right thing.

@Wthensler So sorry for your loss. I don't think anyone is truly strong enough to say goodbye to a feathered baby. @Clueless you are not alone, we are here for you.

You, MC, Secret and your hubby will be in be in my thoughts and prayers. I feel terrible that you all are going through all this. But I also feel deep gratitude and admiration for your love of MC. It only hurts this much because of the depth of emotion you feel for him. And there's something beautiful in that. It the type of emotion connection I wish for all parrots and their caretakers. It's a blessing you have that even if it hurts like hell right now 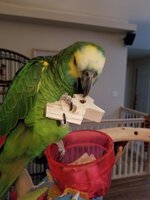 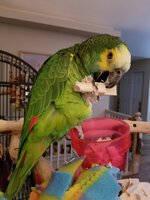