Spix's macaws being released into the wild

I've been following this for a while and a major milestone is quickly approaching...


The adventure begins - a review. On March 3rd, 2020, the first 52 Spix's Macaws bred in Germany started their journey to their ancestors' homeland, the Brazilian Caatinga. Among them are those 20 parrots that will be released into the wild this year, and for eight of them, things will get serious on June 14th.​
​
The flight from Berlin to Brazil went smoothly. The birds were welcomed at Petrolina Airport by a special welcoming committee. After a long drive through the wild nature of the Caatinga, escorted by Brazilian police, the parrots arrived at Spix's Macaw Release Center. They survived the journey well, and Brazilian customs and the veterinary office received them. Afterward, they were able to recover from the exciting journey in their aviaries, which are similar to those in Germany. After a long quarantine period and extensive preparations, the birds were finally allowed into the planted outdoor aviaries in May. From now on, they could get used to their unknown surroundings with all their senses, the new climate, and the exotic sound of the Caatinga.​
​
We'll continue next week; stay tuned!​
http://instagr.am/p/CdN196BMxgn/ 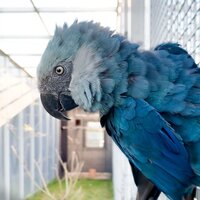 Woah that is incredible!! I would love to do this kind of work. I'll be following this!

Sodapop&Co. said:
I would love to do this kind of work.
Click to expand...

A different organization, but there are volunteer opportunities with Buffon's, Scarlets and Yellow-naped Amazons in Costa Rica...

Volunteer with Us • Macaw Recovery Network

"Being an Intern was an amazing experience". • Join us! Browse our volunteer and internship opportunities, and become a part of the solution.

My interest was peeked when they announced the release date.

Thank you Skylark for the special siggy!
KEET KRAZY!!

flyzipper said:
A different organization, but there are volunteer opportunities with Buffon's, Scarlets and Yellow-naped Amazons in Costa Rica...

Volunteer with Us • Macaw Recovery Network

"Being an Intern was an amazing experience". • Join us! Browse our volunteer and internship opportunities, and become a part of the solution.

Thanks for the links.

Thanks for sharing, I didn't know it had progressed this far.

Isn't that great!! A bird trainer I have used posted about it on FB yesterday. I am really hoping this is just the beginning!

The regeneration of the Spix species and their ultimate re-release into the wild has been a very successful project. It has taken many, man years, a lot of money and the true dedication of many people.

For me the most important was a Sheik from Qatar who sheltered and bred them for years without publicity.

Wow beautiful bird!! Amazing that they are able to do this!!

Hankmacaw said:
For me the most important was a Sheik from Qatar who sheltered and bred them for years without publicity.
Click to expand...

Some links describing that...

I had no idea he’d had a change of heart! IMO, that’s the most miraculous part of this story. I heard of him years ago. Yay! And may all involved in this program be blessed.

I'm curious on how they get the birds to go into the wild knowing how to forage, make their homes and stuff it's good to hear they got a standing chance! 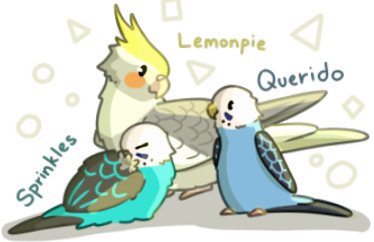 I know that on Dr. Barb's missions, the parents birds were captive breed/ owned by humans. It's the babies from these birds that are release after they are parent weaned. The babies never see humans, anyone caring for them are either in cover-alls like hazmat suit or they are fed by remote control.
The babies are moved to huge flight cages in a remote area. They are vet checked before they go to the flight cages. They are released into these flights. The wild parrots in the area will hear the little ones and come sit near by. Dr. Barb had video of wild parrots bring food to top of the flight cages for the new kids on block. These were not Spinx macaws but Scarlet macaws.

This is so awesome

I had no idea it would actually happen. It's like a dream come true!!

This is amazing, following for updates!

I found this article in my Google feed this morning thought y'all might like to read it.

Thank you for sharing! The article also includes great pictures. They are even more beautiful than I'd previously realized.

I hope this works & that it gives people everywhere pause to consider. If we want to be taken seriously with our captive birds, we should refrain from keeping anything other than least concern classed species, especially if they aren't rescues.
You must log in or register to reply here.