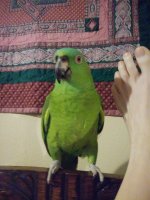 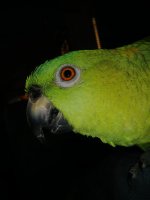 I am a longtime member but have not been here for a while and never posted much.

My life changed drastically in 2010 but I kept my zon and managed to take care of her (actually a him but I did not know that in the beginning). Now I have been working 50-73 hours a week for the last two and a half years, and she is not doing well emotionally. She's angry at me when I come in late at night to cover her up. She's angry in the morning and rarely wants her shower. She lunges at me but cries for me to come close.

In years past, she biked and kayaked with me. I had my daughter plus two foster kids who carried her around. She loved to sit on a shoulder and watch the computer, window, or tv. All that has changed and it is so very hard on her.

We named her Principessa and call her Pessa. She has scoliosis and the vet said that's why she does not fly much. She's skinny and prefers to eat mostly fruits and veg with a little safflower seed. I give her dry pasta to crack for fun and a basket of wooden blocks for foot toys. The vet said to give her healthy high calorie treats so I do give her cheese, peanut butter on whole wheat toast, and she loves shelled walnuts.

Of course she sings and talks but doesn't squawk much or make nonsense noise. She usually speaks to make sense or comment on what you're doing.
She says, "Ohhhh boy, I like that" and knows her colors. She calls dogs "Ugly dog" and applies the same label to people she wants to taunt.

She knows one swear word that my ex used to use and I have not been able to repattern it.

She loves to be outside in a cage and chew carrots and celery in a foraging ball. I used to have a garden and grew dill and fennel. The big stalks were great fun when I wedged them through the cage bars. She would chew them all afternoon and watch the dogs and kids come and go.

I am in the far northwest corner of Washington and don't want to ship her.

She needs someone who will be home more and she is very dominant. She flares and sulks around male birds and refuses to talk. She will bite hard when threatened by male birds and angry male humans. She is very attracted to women with red hair but I'm not a redhead.

That's a little about her quirks and characteristics.

Please let me know if you have a home with female birds or just want a male zon who thinks he's a girl.

I'm so sorry to hear this.

And I want to say that if you don't know who momazon is, that she has very well socialize birds, and they are really well taking care of. ♡

I am sorry that you have to rehome Pessa. Hope you find her a wonderful new home.

I'm so sorry you gave to rehome Pessa. I hope that she finds somebody wonderful from AA.
Hugs
Forever Rocky's

I'm glad you're back on but sad you have to rehome Pessa. You and your daughter did a great job with Dobby and he's the most social outgoing Maxi I have ever known. I hope you and her/he find the perfect home. Dobby is very happy terrorizing here and getting scritches from my sister, his chosen one.

It's a shame my mom has a bird phobia or I would ask my parents to take her in. They live on the eastern end of the state.

Thank you Eloy, it's the economy. For a long time, my area of teaching has been phasing out. My job was cut and now I find myself warming for far longer and far less pay.

I always said I'd never give up my birds but I guess we all change our thinking when we have to.
Still, I can do this with love and I know my crazy kayak bird will love someone who can be around more. She's a great bird but needs high calories, which most zons don't.
She flares and bites. She's funny and loves road trips.
She will be a fantastic companion, as she has been for me.

Its so good to hear from you and I hope your gorgeous pi's are doing well.

Terry, I feel like you're family. When we talked and you drove up with your folks, I knew you are my kind of people.

My gratitude to you is so great I can't really express it. The stories about Dobby eating all Sister's houseplants and chattering away at you really tells me he's in the right home.
Talia always says it is too painful to write you but she thanks you with her whole heart, and she reads what you write.

Pessa does come with a lot of gear, and that's one reason I'd like someone reasonably close. I'd like her to transition with her own cages and perches like Dobby did with his toys and all.

I have to go and will try to check this again from work. Thanks again.

Iamwhoiam, Rocky's mom, and metalstitcher, thank you for your kind words. I knew I could come here without guilt or fear. AA is a great place because of members like you.

Dobby is a special soul and thank you and Talia for entrusting him to me/us. I know it hurt to give him up for you as it would for me.
Dobby got so excited when he was first here and I broke out his big hanging bell and other wood toys mobile hanging thing. He made all the noises he knows and was all over it, he loves any bell we give him. I hope Pessa finds a awesome home and continues to play with his favorite toys.

I hope to find Pessa a home like yours.

I am still hoping to find a home. Please feel free to pm me.

I ahad yesterday pff and she snuggled up quickly, asking for apple and "butter", meaning peanut butter. I use the organic crunchy kind. She showered and dang, then sat on my shoulder for.most of the afternoon and evening.

Has anyone experienced a foster situation?

I may be out of line here and forgive me, but I think you should keep her.

If you're worried about her being alone, can one of your kids stop by and visit with her for an hour during the day?

You're not going to work these long hours forever.

I just remember the agony that Doll had when she gave up Mango.
There is a great deal of wisdom available here on AA from experienced bird owners. They have helped me to understand that even a "clueless" soul can muddle through with the right amount of guidance.

Thanks Clueless, I am not ever sure what to do. She attacks my daughter who lives with me and the boys stayed in CA when we moved up here. You're right, there would be no problem if we'd brought people with us.

I want her to have the kind of life she used to have, or at least not be waiting at the window all day and half the night.

I'm not sure what will ever change. This is what it's taking to stay afloat in this economy. Before the job cut I was fine. I used to read about this, now I am in it.

It's a shame they can't cross borders ...

wanna meet in the middle of Ross Lake?

I'll add you to my prayers. Maybe another job is right around the corner.

Talia is back living with you? I wonder if she can slowly work with Pessa like I did Lurch till she realizes she's trustworthy and a friend. You know it took Lurch a long time to come around but he did and we were friends in the end. Dobby has chosen sister but doesn't hate anybody so I can step him up and give him walnuts and all that with no issues, and he loves to trade whistles with me.
Maybe they can wear each other down and she'll have two people to hang out with she trust in time.

My only concern is that he seems to want to be the only bird in the house. Am I mistaken?