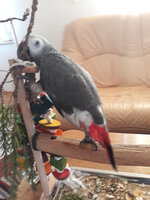 I would never, never in my right mind clip a bird. Never. And worse yet do it at home, without the necessary expertise.
But that is exactly what happened to Loki.

I really regret supporting this "breeder", from whom I bought Loki. Guys you should've seen it.. The deplorable conditions these birds were kept in...
But there he was, this little creature who shoved real interest in me.. I just couldn't help myself.
I find some solace in the fact that at least one of the who knows how many thousands has a good home. 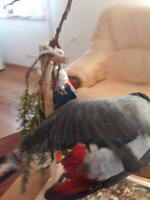 For some reason the breeder decided it would be best to cut off all feathers on the bottom third of Lokis wing. I asked about it, but they said they just don't know what happened.. As if.

When something really scares him he takes off (to save his life), and spirales to the ground, chrashing. When he straightens he looks all confused.
The first time it happend I sat down near him and sarted crying. Loki asked to be picked up and huddeled with me. Through my tears I whispered more to myself than him: "Not much longer, nut much longer now!"

All I see is a super inteligent animal, that is fully aware of the fact that he can not take flight if needed.
Sometimes, after a fall he literally bites at his left wing, the angry lunge kind of bite, 2, 3 times, clearly showing he understands what is hindering his flight.
When he wants to follow me or my boyfriend into another room he readies himself, spreads his wings, flaps a little but gives up and shivers. Not the shiver before puffing up. It is a shiver of hoplessnes. He could climb down... Never does. I guess he doesn't feel safe enough yet.
To make matters worse he isn't allowed on high places, per order of the vet, as the risk of him falling and injuring himself is just too great. This just adds to his insecurities. 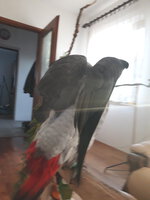 The clipped wing has made him feel insecure, stressed and worse yet he sometimes gives up a fight before even attempting.

I see the appeal of clipping, a lot less effort is needed to achieve the same goal, plus you don't need to bird proof the upper levels of any room...

To me it is just so unfair to the bird...
Flight in birds took milions of years to develop, I don't belive we have the right to take it all away in the matter of minutes.

But I have Hope.
One day, very soon, Loki will have at least the Illusion of Freedom.
He will know the Joy of flight.

Talk birdy to me.

Loki is lucky to have you. My heart breaks with yours over his frustration for not being able to fly. I felt similarly when I brought Elvis, my too, home and realized his wings had been clipped. Although it seems like a long wait, soon he'll be flying hopefully and his inability to will become a distant memory.

Poor Loki doesn't understand. Hopefully he will become a confident flier one day. At least he hasn't given up trying.

@sunnysmom Thank you so much for your kind words!
@Ripshod ...fairly soon

It took until Hope was more than ten moths old for her to be able to fly. I am home all the time, so she hitched a ride quite a bit. It was wonderful when she took off flying on Christmas!

Here's to many more feathers and lots of flying!

Annie's Mommie said:
It took until Hope was more than ten moths old for her to be able to fly. I am home all the time, so she hitched a ride quite a bit. It was wonderful when she took off flying on Christmas!
Click to expand...

I get all teary just thinking of the moment.. It must feel like such a victory! A moment of great pride.

There have been some developments..and I write this all teared up.
@Administrative
Guys, I have a big request...
Could you please (if possible) merge this thread with

This is what I found this morning: I am freaking out just a bit. The bleeding has stopped completely. I cannot see exactly where the blood is from (unfortunately Loki isn't hand tame, won't let me grab him). He is acting completely normal, usual morning chirp (hello), normal weight (394g)...
forums.avianavenue.com
and

Loki will live, but is in pain and the soonest I could get a vet appointment is tommorow at 4.15pm. Something's wrong with his left wing. He lost all trust in me. Long version; :sad2::sad2::sad2: This morning as we (me and Loki) were taking our usual shower, him perched on the covered toilet...
forums.avianavenue.com
...as it is basically all one and the same..
I will also appreciate it greatly if you can rename the combined threads to: Will this Butchered Wing Ever Take to Flight?
I leave it up to you to decide which subforume it is best suited in...

If just one bird remains unclipped, because someone has read through it all, not a split second had been wasted.

Merged. I have left it in the healthy forum (?)
Ps, better to use the tag @ staff if you need any edits/help


Ulis_Beast said:
There have been some developments..and I write this all teared up.
Click to expand...

I hope everything is ok!

Zara said:
@ staff if you need any edits/help
Click to expand...

Zara said:
I hope everything is ok!
Click to expand...

It is relatively fine.
Update soon, still need to clear my head a bit.

@Zara, you are absolutely the best. Thankyou so much.

Maybe a walk could help?

Zara said:
Maybe a walk could help?
Click to expand...

Need to keep an eye on certain drama queen. After bed time.

Location
The Land of The Ringnecks

Thanks @Kiwi's Mom for the beautiful signature!!!

Hope your lovely guy is doing OK! I look forward to learning more about his progress!

Jujube
You must log in or register to reply here.