Cutest/coolest thing your bird has ever said?

Tonight, I had a soda and I always keep it in my lap when I’m with the birds so they can’t sneak a sip. Phoenix stood in front of me for like an hour flirting with me, trying to coax me into giving him a drink He was singing, dancing, and he started saying “you so cute!” Which was the first time he’s ever said that, but dang he was working hard for that forbidden sip!!

For Raijū, his cutest thing would be him saying “Peekaboo!” Every time I see him, it’s like his way of saying hello. It’s super cute.

What’s the cutest/coolest thing your birds have ever said? I could talk about what birds say/do for hours

Oh my gosh those are too good

Essie is more of a babbling chatter-box. She's trying -- tracking pitch shifts and playing with her gravely voice but still not quite forming words.

That being said, If I lean in on my wife, it's fairly often we'll hear a *SMOOCH* from the other side of the room

Rosie, my tiel, only says "whatcha doin?" But he says it in the world's cutest voice. I can listen to him do it all day.

Elvis, says maybe 25 words? He says "I love Elvis" fairly often but when he doesn't want to go to sleep, he'll say from inside his covered cage "I looooove Elllllllllvis" in the most pathetic voice to try to get you to take him back out. He knows how to play you. One of the cutest newer things he's said was I was putting his cover on his cage (which I refer to as "blanket") and he said "Hi Blanket!"

I think Quierido might talk, any tips on helping your bird talk? I don't mind that he doesn't talk, but it's still very cool
*I bet it was very hard not to give your bird soda 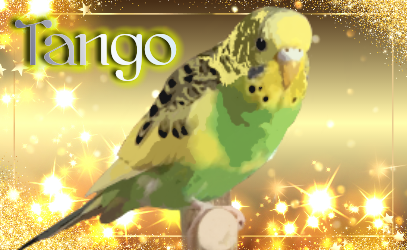 Bogie, the tiel I had years ago, had his cage in front of the glass sliding doors. Once , I walked into the room and exclaimed loudly " eeeeew there's a huge slug on the door " . Bogie promptly replied " uh ooooh ! It was the first time he said that

JaJaBinks (B&H Macaw) would look at food (she often sat on the corner of the table & ate off my plate) & ask "Is it good?". I'd say I don't know try it. She'd take a bite & if she liked it she'd say "UMMMMM good". If not she'd shake her head & say "ewww". Every day, when we fed them in cage foods, she'd do the same. She'd also tell me to "back-up" when I was on the riding mower. She'd wave her wing & say "bye-bye". I could put my hand over my eyes & she'd say "peek-a-boo". I'm trying to teach JaKhu these things. JaKhu doesn't talk as plain as JaJaBinks did. JaKhu is more nasal sounding.

Jengo (CAG) will say "call the birdies" & then whistle a tune. This is from me calling my Purple Martin colony to come catch crickets I flip in the air for them. She also does "peek-a-boo". Jengo has a cute Minnie Mouse type voice.

Jasmine (U2) isn't a good talker, but she does say her name cute.

I'm so jealous that both your budgies talk! Pretty sure I ruined my chances of that by raising them together.
And I don't know what is up with the Amazon being the most silent bird in the house LOL.

I still kind of hope to someday have a really great talker. If I ever do get another bird it would probably be either my pionus, blue crown conure, or a TAG.

For now I have Oggie quotes! Some of his word sounds are open to interpretation for sure..there are only a few and I might be mishearing him, but he does the same ones in the same situations at least.

Oggie's cutest ones are
1. When he sees us offer him a new treat, or one he hasn't had in awhile. He goes "Ooooh!"

If we're offering a treat he wants but not *that* special he says (I think) "For me."

2. He likes to rock back and forth on his perches, so I gave him a swing. But the first time he got on it he gave it such a rock that it started swinging and spinning all crazy like a carnival ride!
He was desperately trying to snatch at the cage bars to get off, and I had to manually stop it with my hand for him to flee.
I thought that would be it for swings.
But I guess he's learned how to control it now - he shocked us a few days ago when he suddenly got on, started swinging and spinning like a hurricane, and called out "Wheeeeee!"

3. How he asks to be picked up, that little foot lift and saying his own name. "Og-gee?"

4. When I have chips or some snack he mistakenly thinks he should get a bite of, he starts saying (I think) "Good birdie!"

5. Every time I cough he coughs.

6. "Doopie doopie dooo!"
I don't know what this is. My bf and I say this all the time now. We learned it from him.

7. I haven't pinned down if this is directed at me or the dog.. in the evening when we all migrate over to the couch to watch tv (right where Oggie can see us best) he says "Hi/hey buddy/baby".
I suspect he's indeed talking to the dog.
Cypress

(Pyrenees mix, 10 months) who definitely thinks he is a bird

Chaos was outside with me one day and I tripped over my own feet.
He said 'you ok?'. Has never said it since, but I ask all my birds this is they fumble or fall.

MC would holler "whatcha doing" when I'd be in the bedroom and out of his sight.

Secret's funniest was during a family Thanksgiving bash. A young boy (great nephew) was standing in front of his cage and giving Secret a lot of attention and I clearly heard Secret say......"let me out"!

I bolted across the kitchen.
There is a great deal of wisdom available here on AA from experienced bird owners. They have helped me to understand that even a "clueless" soul can muddle through with the right amount of guidance.

Clueless said:
MC would holler "whatcha doing" when I'd be in the bedroom and out of his sight.

Secret's funniest was during a family Thanksgiving bash. A young boy (great nephew) was standing in front of his cage and giving Secret a lot of attention and I clearly heard Secret say......"let me out"!

Haha! I forgot - we had my bfs 4 year old nephew staying over for the 4th of July. We made sure to warn him repeatedly, (even with a baby gate sectioning off the area) if that bird says "Come here!".. don't do it!!

My best ever talker Chipper would repeat just about everything i said. One time as i was leaving in the morning for work he said "see ya later" to me. After that i only heard him say this as i left for work in am.

Did phoenix ever get that sip of soda?

Lady Jane said:
Did phoenix ever get that sip of soda?
Click to expand...

Man I wish I could have, he definitely deserved one!!

Elysian said:
I'm so jealous that both your budgies talk! Pretty sure I ruined my chances of that by raising them together.
Click to expand...

I’ve seen YouTube videos of people getting their budgies to talk when they were flock raised, you just have to say it all the time like it’s your flock call and eventually they’ll say it. I think Phoenix is more likely to copy whatever I say since I’m basically his mom, but Raijū has started copying what I say repeatedly (Peekaboo, pretty bird, bacon pancake, and my laugh )

Honestly I say some of those so much, especially bacon pancake, to where I’ll start saying it when the birds aren’t even around. I may be crazy

My budgies say all sorts of cool, cute things, but I don't understand them, because they say them in Budgie.

Have always wanted one of them to say ‘pretty bird’, but have admitted it’s wishful thinking and honestly I don’t care anymore

Sparkles99 said:
My budgies say all sorts of cool, cute things, but I don't understand them, because they say them in Budgie.

I don't know if it is a standard budgie noise that he has just started making, but Merlin has recently started to give this little whistle/chirp with the intonation of someone exclaiming "what?" It makes me giggle every time because it sounds like he is perplexed by something, and I have no idea where he picked it up. My sister thinks it sounds like me saying, "yeah?", because I will absently reply to him that way sometimes, but it's definitely a little whistle!

Few days back, I returned to my morning sleep after removing Inca's cage cover... While dozzing off, I heard my refrigerator alarm. I rushed to the dining hall, everything was fine there, refrigerator door was closed so no chance of alarm... I came back to my bedroom, Inca was sitting on his favorite perch, looking TOO INNOCENT

This thread really gave me a smile, love to read all your cute and funny things

I don't have a particular cute or cool thing, I just think it's amazing that Sisi really gets the meaning of some of the things she says or when you use it!
Everytime I come in her room she will say "hi" or "hello", and when I leave she will say "bye!" She also says this when she doesn't like things or just wants you to go so she can rest

Sisi has this really big wooden toy where she will sleep on, last weekend she was sleeping on there again and my boyfriend asked her "are you sitting comfortable there?" and she answered with a loud "yes!"

When she thinks my dog is doing something bad she will say his name kind of mad. And when she's mad at a toy she will say say her own name kind of mad.
When she wants some kisses she will ask "kiss?" or will make kissing sounds.
There are just a lot of things she says that are really cool or cute, could write a whole bookwork on her.
You must log in or register to reply here.