I just noticed crust around my two budgie's ceres... do you guys think it's scaly mites? Their beaks were fine just yesterday... i could also be the new veggie chop i gave them (i change my recipe every batch i make and the vet says it's fine if they're used to constant change) this recipe might just leave more residue.

They also both had dried blood under the wings in the past two days. Here are some pictures. The colors on the face feathers are definitely the veggies. I already took an appointment for both of them at the vet, the only opening they had is in 6 days and I'm worried that if it is really mites, it's growing incredibly fast since it happened overnight. 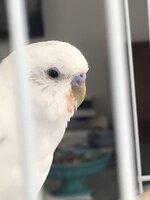 There does look to be some damage to the cere, damage that won't suddenly appear overnight with mites. Can you post a frontal photo?

Pastel said:
They also both had dried blood under the wings in the past two days.
Click to expand...

Not a symptom of scaly face mites. You want to look at the possibility they're fighting when you're not there.