Okay, I'll see if I can find some. 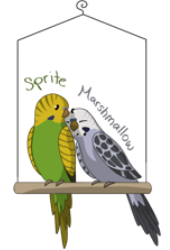 Sprite seems to be doing a little better today. She is still puffed up, but I have only seen her sleep with her beak tucked into her wing twice. She hasn't thrown up again either. Twice it looked like she had to, but then nothing happened.
I also managed to get an appointment at a different, closer vet clinic. The appointment is also earlier in the day. Unfortunately, I won't be able to go in with her. But they will let Marshmallow go in with her, which is good. They are inseparable, so it will be less stressful for her if he is there.

Alright, so this is basically what the vet said. Sprite has one of two possible things. I can't remember what they're called, but one causes the liver to enlarge, and the other is a yeast infection that causes the stomach to enlarge. Both cause very similar symptoms.
So, since we're not sure which of the two she actually has, she gave Sprite a shot of antibiotics to treat the enlarged liver, and she's sending a sample of her poop to a lab to test for the yeast infection. We'll get the results from that by next week. If the test comes back positive, we're going to switch over to a different treatment. If it's negative, we're going to keep going with the antibiotics.
In the meantime, because Sprite is unable to absorb nutrients from her food, the vet gave me a powder (form Harrisons) to sprinkle on her vegetables, which will be easier for her to digest, and will give her some extra calories.

I am so glad you were able to get her in

Mizzely said:
I am so glad you were able to get her in
Click to expand...

I think the antibiotic is helping. She seems more lively today, and she even took a bath this morning!

DesertBird said:
I think the antibiotic is helping. She seems more lively today, and she even took a bath this morning!
Click to expand...

Thanks! I hope so too!

I weighed Sprite this morning, and she's 30.31 grams today. She was only a little over 28 grams on Wednesday. She's gaining weight!

I got the fecal test back today. She came back negative for the yeast, which I expected based on her reaction to the antibiotic. So, starting Monday, I'm going to have to give her antibiotics twice a day for 35 days. I'm kind of nervous, as I've never had to grab her before. But she trusts me, so I think we'll be okay.

Mizzely said:
In theory, anything that has protein has the ability to cause an allergic reaction. I don't know what that looks like in a bird.
Click to expand...

I bought a package of seeds for Baylee once and she began some sort of strange molting I was like weird mmm I decided to not give her that and the strange molt stopped… so I knew it was the seeds that gave her an allergic reaction.

Thanks Kiwi’s mom for the siggy.
You must log in or register to reply here.