What's with these feathers?

I have a Silver Phoenix rooster who is about 8 years old or so. I just noticed today that his feather coloration... is changing. 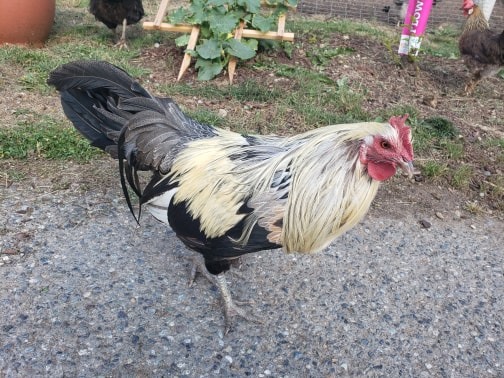 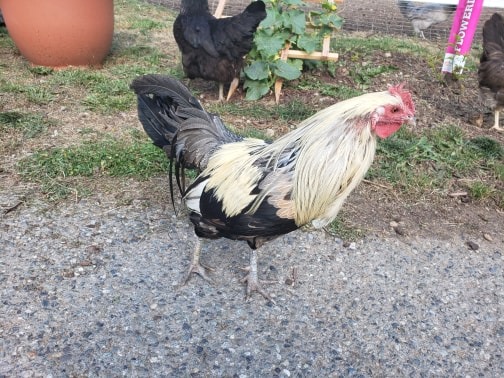 I looked up Silver Phoenixes and this seems to be the coloration of a female... My poor guy must be so old the testosterone is gone and he's losing his male plumage. It's a little endearing, he's always been a wonderful bird and I'm glad he's made it this far.

(Of course if I'm wrong and this is an underlying disease or issue, please let me know. And he's had that bald spot behind his ear since he was young. He just never really grew feathers there.)

@Gav What a beautiful rooster. 8 years is a nice old age, well done! You must be treating your chickens as they deserve !

Since he is elderly I would say he is just ageing. His black feathers no longer have that purple/green shine. His comb doesn't have that bright punchy red that he had in his younger days. Chicken express a lot about their health in their feathers and comb. This could be the photo, but is his left leg thicker around the ankle than his right? It is hard to tell in this picture what may be going on there. Scaly Mites, arthritis, poor circulation causing oedema?

This article has some advice on leg issues. Since he is elderly I wouldn't treat him for mites without confirmation that he has them. No reason to put his little cuteness in unnecessary stress. If he is having some leg pains you can try giving him softer surfaces to walk on and protecting him from slippery surfaces. Straw works great for this.
Leg Problems in Chickens: Signs/Symptoms/Treatments: Chicken Heaven On Earth - Chicken Heaven On Earth

One of my elderly hens broke her hip, her name was Rodger, long story on the name. She slipped on a mossy covered rock after a rain. She had to live in the house with us during her recovery. The poor girl. She was a large breed she recovered but had a lot of leg pain the rest of her life. We built little ramps all around the yard. She never wanted to hop over anything ever again. It is a mixed bag when they start showing their age. I wish we could be with them forever, and at the same time it is beautiful that they get to live out their lives to their entirety. Not many chickens get this privileged in our modern society.

@fashionfobie I've had a couple lucky birds live up to these years. I believe my first hen ever died when she was around 9 years old which I assume to be just the lifespan of a chicken. She was a Rhode Island Red and she was always a lighter color than the rest of my reds but towards the end her feathers were actually starting to turn a little white. I absolutely loved her and I wish they lasted as long as parrots can.

As for his legs, we did have a run in with leg mites a while back. It was really, really bad for a lot of the birds but he actually somehow dodged them for a long time. They did catch up to him finally but the case never escalated luckily. Years ago I think he twisted his ankle jumping the fence once as well, hence the swollen looking toe. Sadly I've had a lot of these birds since I was a kid and we don't have the funds to treat every one of them. My grandparents were kind enough to take one of my birds in for an emergency surgery years ago, but regular vet care for any of them was simply out of the question. And he runs free so there's plenty of dirt and grass for him to travel across. My grandparents want the birds locked up most of the time, but he's the biggest weasel when it comes to staying caged up. He's the smartest bird I've ever had in the flock.

And poor Rodger. Luckily chickens seem to be super troopers and will walk off just about anything they can. I have a few stories of some of my chickens who had heads stronger than their bodies. As long as they're given a chance and a little help they can pull through just about anything.

I don't know if this is necroposting or not... but I was scrolling through the poultry page and came across this again so I decided it was due for an update. Here's my old boy now.

His name is Lee by the way. He's been an absolutely wonderful rooster and I know his whole life story. He's still doing good out in the yard and I hope he keeps it up a while longer. 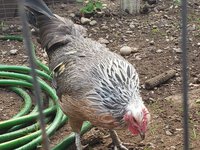 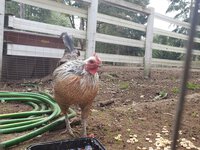 Oh wow the change is amazing. I am glad he is still happy and going well! Cheerios for all! My eldest hen hasn't laid for nearly 2 years, we love her so much. We are starting to dread the fact that old age will do her in someday. She is still doing great, but she does rest a lot more than in her younger years.
You must log in or register to reply here.