My Cockatiel will not stop screaming. I rescued him and really dont have much of a background on him. What I was told was he was used as a breeder, during breeding season he would be with a female and off season he would be alone. The cage he was housed in was the parakeet sized cages they sell at petco, too small for any bird to live in full time. After being a breeder he then he was "rescued" by another lady, I say rescue loosely because I think shes just a bird flipper. His beak and nails are way over grown and he was on a fully seed diet. I was told hes 2yrs old.

Since having him, his beak and nails are slowly getting shorter now that he has proper perches. He loves pellets and hes been doing fairly good with fresh foods. He only likes kale and spinach but were still trying with other foods. He hates peoples hands and has drawn my blood many times. He is far from hand tame and still panics when I reach for him and tries to bite when I change his food/water dishes. However, if I leave the room he screams bloody murder. He screams when its morning and bedtime 7:30am-8pm, and wont stop until hes covered or uncovered. When I watch TV or do any activity where I am not sitting near the cages focusing on the birds he will scream. I have other birds in the same room with him, he has seperate out of cage time because he tries to attack everyone.

I understand it takes a lot of time for adjusting and training but my roommates are fed up and do not have the patience I do. Please give me any advice on how to quickly curve his screaming behavior. Normal chirps and whistles are not bothersome to my roommates but his constant screaming is. 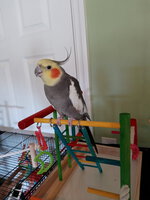 Maybe this article will help? ;

It seems sometimes that the bulk of our days is spent trying to change the behavior of other species – spouses, co-workers, children, pets, and even pests. We struggle to get our kids to do their h…

Aww, he's a cutie. Screaming in the morning is normal and I don't think there's really a way to stop it. Do you let him come out on his own? It's hard not to reinforce screaming but in order to stop screaming, you have to ignore it. As in no reaction, good or bad. Don't tell him to stop. Don't leave the room. And then try praise or giving him treats when he's quiet.

Thank you. Yes he comes out on his own. I must be reinenforcing it without realizing.
You must log in or register to reply here.