I just adopted my severe macaw kinski, who is about 15, and she seems to have a rapidly deteriorating beak that just flakes and splits when she is destroying things. She also has a protruding, bulging preen gland, bigger than I've personally ever seen on a bird but potentially normal. Could the preen gland be blocked and causing the beak to wear because of the lack of oil?

Previously in my life I had an illegers for ten years and don't recall her having such a big preen gland and definitely not such a brittle beak. But I've been out of avian circles and care for a long time and might be paranoid!

She has her first well check with me this sat and I'll get vet input, but I'd value the collective wisdom of the group of you have a moment to look at the pictures attached. 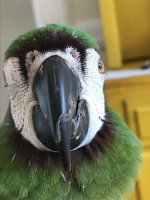 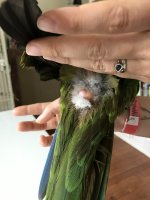 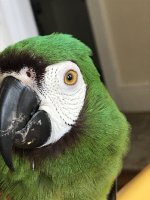 Her beak looks perfectly normal. She looks as if she hasn't had toys to chew on before you got her. If a bird chews a lot the beak is kept a lot smoother.
The preen gland also looks fine. There is no obvious swelling and no redness around it that would indicate irritation.

Thanks so much Hank!

She had a good environment before me with a great owner for most of her life who had to give her up due to a fatal illness and then a reputable bird sanctuary had her for about a year, which is where I met her. She had plenty of toys and shredded lots of paper (her cage newspaper) before me.

But you are most likely right that she is getting more action now in the last three weeks in her new home. I give her daily treat mix in a brown wrapped package she has to destroy to eat and she sits with me and destroys junk mail and brown paper bags a lot. She loves this paper and cardboard shredding and gets really into it. That's when I see the most splitting and flaking of the beak. Maybe I should limit this a bit? Or if you think it looks normal I'll keep letting her?

Let her continue and try to encourage chewing on wood and hard toys. She can't hurt herself by chewing on things (except your favorite antique furniture) and it will get her beak into shape and keep it that way.

BTW - thanks for takeing this pretty girl into your house and heart.

Thanks so much. I'm really glad I got her the pleasure is all mine. The confusion is all my husbands and standard poodles but they are warming up to her
You must log in or register to reply here.