Oh gosh I just want to cuddle her

webchirp said:
She is…I kinda dragged hubby into this somewhat kicking and screaming but I asked him today (because now he comes home at lunch lol) if he was okay with getting her. He chuckled and said yes, she is fun. I think she captures everyone. And she loves to cuddle. She walks up to you and put her paws on your chest and lays her head on your shoulder for snuggles. I wish I would have gone cavalier a long time ago. The Pom girls like a good scritch but no cuddles.
Click to expand...

Oh yes I've met many affectionate Cavies in my time. They do love a good snuggle,I find Poms to always be on the Go and not very interested in snuggles cause they wanna be exploring instead.
Bosco

April said:
Oh yes I've met many affectionate Cavies in my time. They do love a good snuggle,I find Poms to always be on the Go and not very interested in snuggles cause they wanna be exploring instead.
Click to expand...

Our girls are very snobbish and bossy.

She’s growing so quickly and we love her so much! 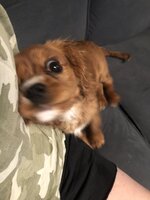 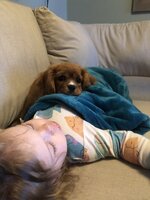 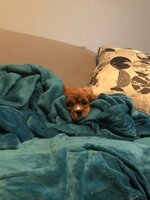 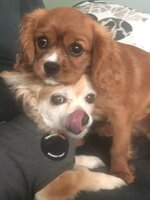 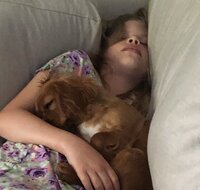 I love the spot of white on her wee, little nose.
In His hand is the soul of every living thing. -Job 12:10

Sparkles99 said:
I love the spot of white on her wee, little nose.
Click to expand...

That’s what made me pick her too!

Ahem so those of you that know me, know I never do just little steps...I had asked to adopt Ruby's mom so that would be our second cavalier. Then my daughter visited for two weeks with her two boys who played and played with Ruby. Then when she left, poor Ruby went around the house crying. 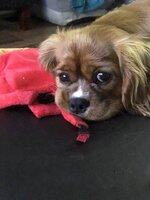 Then came Hazel...because you know I'm all about friends. These two have been peas in a pod. 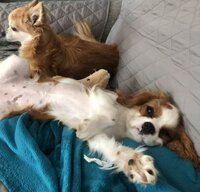 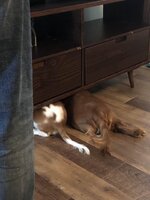 Then we got the green light to adopt Rose sooner than expected but not soon enough for Ruby to have a friend... 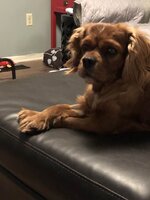 And now...five puppers again...the two older girls are 13. Piper is holding with the autoimmune meningitis. She wasn't hit nearly as hard as Rogue. So I think we still have a few years. 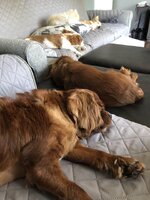 They are all adorable!

What sweet faces they all have.

x4 Bella, Boo, Daisy, Wini
You must log in or register to reply here.