Yesterday I noticed a very dramatic change in behavior that was so obvious has left wanting to share with you guys.

Echo is now 2yrs old and I'm almost 8months pregnant. I had a personal bad day. I was really sick, emotional and dramas with the renos where leaving me very angry and frustrated. I actually felt I was going to break.

I move echo and his cage into my bedroom so that workers, noise, smell etc doesn't affect him. As a result of the isolation Echo can scream a bit to get out. Often I just sit in there with him to keep him quiet and we watch movies. Yesterday I couldn't as need to be available for the workmen. So I expected lots of vocalization.

Echos behavior was completely different today. No screaming for attention. Every time I walked past the window he would say 'good boy' 'hello' or ask 'are you ok'. I didnt think much of it tbh. Then once they left and I was cleaning up Echo was like velcro and wouldn't leave my side. Well I took the opportunity to pat him as much as possible which he actually allowed (he only likes a pat with his cuddle at night). Everything I asked of him he did and then would say 'good boy'. Hubby eventually got home and I went outside to clean up there but a big storm was coming. Out of character for Echo, as he was out flying around, he was screaming everytime I was out in the weather. As soon as I came in he was happy and chatting away again playing with toys and enjoying the freedom of being locked up all day. When I went outside he started screaming again.

On reflection I realized how stressed I had actually gotten yeaterday and how much my little Echo tried to help me through it. At night I think he was really concerned about me being away from him out in the storm that was coming. I think he knew how close I was to breaking point that he even allowed me to pat him during the day which he never normally allows.

I'm so touched by his awareness and concerns for me. I'm also mindful that my stress could've affected him in a negative way and created stress for him and thus new behaviors or issues. I wish more people knew about how observant and sensitive these guys are. Like that they get indormed before they buy one, not after having one. New owners should be educated on how much their worlds include us and how much ours can affect there's. Especially as our mental/physical health can be overlooked as an impaction to a feathered friends.

More renos happening today but at least I'm feeling a little better and more aware. I've also asked a friend to come a help me out so I can take time out to rest as I need to. She has an amazing relationship with Echo so he can have some attention too.

I agree! Just as you watch their body language to see how they feel, they are even better at watching ours!
It's great that you two can take care of each other, and very special too.

They really are sensitive little souls and I think do sense our emotions, etc.
Owned by Elvis, the 'too

sunnysmom said:
They really are sensitive little souls and I think do sense our emotions, etc.
Click to expand...

When I had shoulder surgery, Sergei would ask repeatedly "Are you alright" and "How ya Doing". I couldn't figure out how he knew I was in pain! 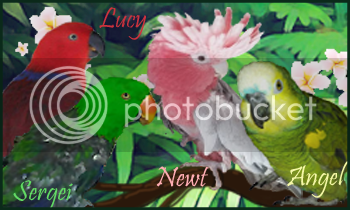