A little upsetting behavior going on over here. Both birds are molting but Wally a bit more (he’s a week older). He’s a bit bitey at the moment, I can imagine that it’s uncomfortable for him. We are trying to curb that behavior but he is hyper and a little unfocused. That’s being worked on as well. The problem lies with his relationship with Eva. I noticed that they weren’t sleeping together one night and she was hanging on to side of the cage. I realized that she’s doing this so that she can run away from him easier than flying to another spot. I’ve noticed that he will beak her. Eva’s personality is very calm so she is quick to just move away from him instead of engaging in a disagreement. He isn’t plucking her, he isn’t abusing her but he is picking on her. I’m increasing their time outside and noticing that he doesn’t go for her but she is no longer his shadow. Usually wherever they fly, the other one is right behind and lands right next to them. But I’ve noticed that she chooses to be close to him but not on top of him. My next question is do I let them co-exist in their cage? Or should I get another cage and put them together with the door open so they can move away from each other? I’m sad I have to separate them and I don’t even know if it’s necessary at this point. 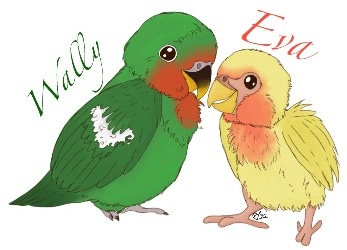 I know birds sleep in weird positions but mine have only slept like that when they were unsettled first few days in new environment so I would take that as stressed for mine
You must log in or register to reply here.