I recently like yesterday, took in a ring neck parakeet.... I think the term used was Indian Ring Neck.

I feed roudybush pellets, mini to my other birds and assorted other needed foods. I have bought a book on these birds, but I need quick answers too.

How much should I offer in food by the tablespoon or cup measurements. What is something I can do to encourage good behavior and how to watch for dangerous body language.

His former owners were in their late 80s. Jade hasn't been loose to free fly in at least a year and was clipped prior to that.

I have a larger cage for him, but unless he makes the transfer on his own I worry. Advice needed for this.

If anyone can offer some help for me to learn by, please do.

Mostly, Jade needed a home and his parents wanted someone who dealt with difficult birds to place. Yes. He has nipped me a couple times. 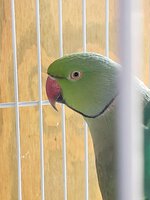 Congratulations! He’s a beautiful bird. Thank you for helping him out.

Ive never had a ringneck so am not helpful but with cage changes I like to put fun things in the new cage, transfer the bird over, and cheer about the new cage “Wow! Look at that! Look at the yummies here in the dish” etc then after a few minutes take him back out. Repeat. Eventually they WANT to move over.

He's very handsome! Thanks for helping him.

I used Proso to get him to transfer of his own accord. The first cage I tried he absolutely hated. I went with a black dome top kind of cage.

Wouldn't a conure blend be better?

I let Jade out to play. He was snacking on proso two feet away and when I reached for my coffee cup he took a swipe at me. Is this bluffing or something else?
N

Thank you for giving him a loving home. It takes a long time for birds, especially IRNS, in my experience to settle in.

He doesn’t trust you yet so give it more time. He’s in a new home and he doesn’t see the people he’s used to (his previous owners). It could take upto months for him to warm up. But please have hope and don’t give up!

How old is he? is he food motivated?

Is he in his old cage or the bigger cage you got for him?

I placed him in the new cage on day two. Yeah, I would day he is food motivated to the point of aggressive behavior. I've begun working on that. Jade is five years old and showing signs of molt/hormones...

He's highly playful. I'm challenging him with different things. I was considering some puzzles.

Jade is very well socialized. I'm grateful his former family did this. Yes, he still misses them but he began seeking me out tonight when I left the room.

Wow! He is beautiful

My Jade has been with me for almost 10 days. Things I learned extend to pretty boy for everything he likes and wahwah for everything that annoys him. Jade goes off like an alarm if he's mad or scared. He also barks for attention. He is very intelligent and picks up new words quickly. He prefers egg over chicken, fruit over greens, and favors nutriberries over proso....

Now, he has a lot of mirrors. He tried to bite me a few times over the one mirror he had, so I added more until he stopped trying to bite. Day two and he's mostly ignoring them.

Jade for some reason despite loving his former owners equally, hates men. He doesn't like them at all, which is strange, because he apparently preferred his owners Linda and Hoyt equally.

He really dislikes my birds fighting, yelling, or in general being loud. He whispers a lot, shadow plays, and tells all and sundry off. He also offers comfort noises to my Celes when she gets into a mood. Kind of odd, I guess.

An update from my Vet. So, my vet visit went decent. We talked about Jade's diet from before and after the rehoming. My vet knows I prefer roudybush for my birds. Jade was on zupreem pellets alone, no seed, with proso, sunflowers, and pumpkin seeds fed as treats with fruit and random veggies.

Jade was underweight. He has been on my avian diet for a week with added vet recommended avicakes, nutriberries, and omelets with veggies. Fruits are fed every other day. I'm to keep this up til his next appointment.

Jade stole my phone. Its Samsung s9 with a really good case. However, he stole my phone and when I stole it back, he nipped my middle finger. Still. It's kind of funny how he went right back to liking me again. I don't think the bite was malicious, however.... he has threatened all the screens in the house. Lol.... jealousy perhaps?

Location
Somewhere over the rainbow

~RIP lemon~ you gave life a meaning whilst you were here ~

So I spoke with my vets desk lady about getting Jade's nails done and training to get him to a scale. So, this isn't something I have much practice with and will be attempting first with my friendlier birds. But I could use some help or advice to get Jade to step up at least.

Jade got his nails done and then... they did a clip of his wings. Before anyone goes spiral over this my vet explained it was for Jade's safety. Because he won't step up and easily panics over hands its best to keep him in arms reach. He also said its best for smaller birds to have this done as well. He did show me how to properly clip my birds, how-to towel them, and the reasons to use a pillow under the bird versus harder surfaces. We discussed his diet and former owners, etc. Jade has never had a day of unclipped wings.

I have a lot to consider at this point especially in regards to my other birds.

Also, Jade is six years old this month. I feel kind of bad considering its his birth month. I'm gonna nickname him my turkey baby. I got him some special treats and am looking for his birthday toy.

Cost total is 30 for the nails, 30 for the wings, nothing for the beak as it wasn't done. Jade did get good compliments on his color and posture.

Hey, I just saw where you asked for help getting him to step up and no one answered. Do you still need help, or is he doing it now?
You must log in or register to reply here.