How much hope is there for birds with heart disease?

He is adorable! Yes, there is always hope.
ges.jpg

How are you and your sweet Widget doing, @AGS ?

@Kassiani Widget is doing really well, I appreciate you asking. We actually just moved and I thought the stress would be really hard on him but he is doing way better than expected. I got him a new carrier so the car ride was about an hour and a half but he didn’t mind it because he loves his new carrier. I think he is adjusting better than me lol. He whistles and plays all the time now.

Also, it has now been two years since he was first diagnosed.

I’m glad he is thriving in your new place. It sounds like quite an adventure for you both!

Definitely. At least he has his computer though! (I watch him the whole time with the cables). The character on the show he’s watching is Widget who he’s named after.

I just love his sweet face and those cute, pink feet!

Yes his feet are adorable. I feel bad that his nails are so long but last time I tried to cut them I hurt him badly. Now I get so nervous I’m going to hurt him that my hands start shaking which just makes it more likely that I’ll hurt him… And taking him to the vet every few months is hard on him. I know it’s not great but on the plus side when they’re long he has no gripping issues. When the vet tech cuts them he falls a lot.

He also has been being very… hormonal and keeps trying to climb on my hand. Does anyone know why he’s like that? He isn't normally. I’m wondering if it’s because he gets more natural light now? My room gets a lot of sunlight now especially in the morning whereas my old room was pretty dark and I used a lamp for the second half of the day.

I also do have a lamp for when the sun starts going down and he has been obsessed with it. It is flat at the top pointing towards the ceiling and he keeps wanting to sit on the top on the light. It doesn’t get hot but I just still don’t think it’s good to let him sit on it with it being so bright.

Also the new lamp is daylight colored. The old one was more orangey. So maybe that’s also making him think it’s natural light.

Okay I know this sounds ridiculous but I’m actually getting kind of worried about him continuously trying to mate with my hand. He only does it when I let him play on top of his cage, but he has always played on top of his cage and never done that. Is it possible it’s just because he’s getting more hours of daylight? Can that ever be a sign of something wrong?

Again I know it sounds weird to think that means he’s sick but I have anxiety and pick up on anything out of the ordinary, good or bad. One time when he was feeling pretty good and had a lot of energy I even got scared it meant he was dying because sometimes animals seem magically better days before they die. He has been playing less and acting more tired which usually only happens when he’s molting but he’s not molting. He also has been eating less again, but usually that’s because his chronic giardia is flaring up so I can try to treat him again.

Sorry I know I probably sound crazy with the things I worry about. I’m just under a lot of stress right now so it’s hard for me to know what’s rational and what’s not when it comes to my anxiety. Moving was really scary because I didn’t know if he would survive the stress.

Oh, and he is seeing the vet next Monday for his annual exam. At the very least he will get bloodwork.

The quality and quantity of sunlight has a large affect on my budgies’ hormones, so it makes sense. I hope that your upcoming vet visit goes well!! Let us know!

Will do! Here he is on his new play gym I got since I couldn’t bring his old one. He’s still a little scared of it but didn’t want to come down. 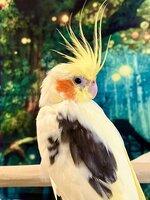 That is an excellent crest, Widget!!! You might just rival @Khizz 's Jeff with that crest, lol!

He looks very proud and happy

AGS said:
Will do! Here he is on his new play gym I got since I couldn’t bring his old one. He’s still a little scared of it but didn’t want to come down. View attachment 413028
Click to expand...

Lol yes he has a very fluffy crest, it’s his best feature. And his smile of course.

Okay so I got this tapestry for my room and Widget is obsessed. He gets a meal after his nighttime medicine and he keeps begging to sit in front of it to admire it while he eats. Then today he was making me hold him up to it so he could lick all the lights. Then he tried to climb onto a branch, but it seemed more like he was trying to climb the fabric than thinking it was a real branch. I don’t know what he thinks it is lol.

This is so nice it is not surprising he is interested by it! And he looks very good!

Poor Widget. He saw the vet today for the first time in Tucson (Dr. Brown at AZEAH). The good thing is they did the exam and bloodwork quickly and got him back in his carrier right away. The bad thing is even with that he was panting badly. I debated asking for him to be given oxygen but waited a bit because the oxygen may help but he would be so stressed going in the back again so it might cancel out the benefits. So I waited a moment and luckily he calmed down and took a bit of a nap. He perked up as soon as we were back in the car since he knew we were going home. He’s eating now and seems okay, they bruised his neck again though. I feel so bad and wonder if next time I should just ask for the oxygen.

He looks healthy on the exam, still waiting for the fecal results to be emailed (they were very behind they said or they’d normally have given me the results while we were there), and hopefully they’ll call with the bloodwork results within the next couple of days.
You must log in or register to reply here.