hello!!!! i am a blue female parakeet, i have a very very interesting story! I don't know how, but somehow ended up in the W.I.L.D., the W.I.L.D!! all alone , left to fend for myself, i found a dove! we were friends for a bit, then about a moth later, some caring girl spotted a dove and me! at first she thought that i was an albino dove!! then i landed on a fence and she freaked out because she saw that i was really a parakeet!! she had wanted a parakeet for almost 2 years! so later that night when i went into a cozy nestbox that i had kicked a family of bluebirds out of, i heard a little bit of clutter. all of the sudden, something covered the hole and the key fell out and the door came crashing down! *clutter* i flew into some weird, dark, crate smelling as of *sniffs* dog?! hmm, well that is odd, looks like im in a dog crate!! then the lady took me inside of a HUGE, i mean HUGE bird house! It even had multiple rooms, but i was taken to one small room. it had a comfy but sweaty looking long thing. the girl kept singing to me, and had some white thing that im using right now. then all the sudden there was this huge thing with some cool treats and food, i went in, and BOOM! the door shut! im not sure, but i think she wants to touch me before she will let me out. Im trying, but im not sure about being touched.


Thanks for reading my story, Bluberry 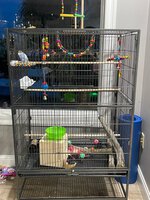 Wow, dat sounds exciting! It looks like you have the same house as me lol 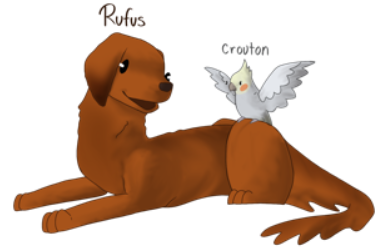 Thanks SkyLark for the awesome siggie!

got it on amazon, the UPS guy must've been mad, has a few dents in it, but serves the purpose lol

Yas, da homman touches me!!! i hangin in the indoor tree rit nows. I likes tos bite hooman fleshes and gnaw on nails

She onlys tooches me on da head, i make sure to sqwakkss if i get touched anywhere belwoss de necks
You must log in or register to reply here.