Goodbye Kiwi, i love you

I'm so sorry my dear... Kiwi...look for Merlin the chicken clucking IRN..he will be your freind at the bridge..

I talked to my vet last night. Even though we didn't do a necropsy (I couldn't put her through that), we talked about her symptoms. He said, based on what happened, it sounded like atherosclerosis that led to a string of seizures or strokes and there was nothing I could do. It went undetected in her previous vet appts, she was otherwise healthy and the correct weight. Although that doesn't make it any easier with her gone, it does give a little bit of closure.

Kiwi, I love you sweetheart. I miss you so much and I am sure you see me go say goodnight to you every day like when we did when you were alive. I wish I could kiss your beak one last time. Grandma, Derek, and I talked about you yesterday and how you would steal food from the dog and off of our plates. You were such a good girl.

It sounds like there are a lot of friends waiting up in Heaven for you. Keep Grandpa company; I am sure he has a bundle of almonds and walnuts waiting for you. Maybe even some cheese just for a little treat. Go find some other birdie friends while you are waiting for me. Try not to scare them off ok? You're just a big green chicken at heart.

I'll meet you across the rainbow bridge. Until then, I will see you in my dreams.

So sorry for your loss.

Kiwi will welcomed and comforted by others until you join her at last.

It's hard to think that it's almost been a month since she passed. I keep finding little bits of her food or small feathers when I clean. There are times where I feel like I'm doing well and then I lay in bed at night and just cry. I feel like this is a long bad dream I can't wake up from.

Kiwi, sweet girl, mommy and Derek love you so so much. We miss you everyday. We still hear you talking in the background, chattering even though you're not there. I know that's you telling me that you're ok. I hope you keep doing it, Kiwi. I love hearing things that remind me of you.

I love you. Kiwi is a pretty bird.
T

My Amazon used to say, 'Are you a good boy? aswell as so many other things. He would speak, whistle and he had the most hilarious laugh. There are hundreds of things I miss, everyday, so I know how you feel.I've even left the marks on my wall where he used to flick his food...I just can't wash them off because they remind me of him.
Unfortunately grief comes in waves. I too, feel better some days than others. I find the mornings are the worst. Our little feathered friends are a part of us and when they go it is SO very hard to deal with.
Yet our memories keep them alive in our hearts and we will have those memories for always.
I will try to attach some

poems that I got some comfort from in those early months.
My thoughts are with you. Kiwi will be looking down on you with so much love, as you gave him. 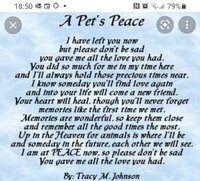 Sorry about the layout of the poems. As you can see, my ICT skills are not good x
S

@Tilly123 Thank you for finding the words, I guess a lot of us are speechless in these situations.

Yesterday I have seen the message of @dessa.meeh and did not know how some words could eventually help.

All I can say is that I have a deep belief in the fact that humans, parrots… we are more than our bodies and there is more than what we experience in this world. We are divided in flesh in this world but something bigger and more important will gather us all, human, animals…

@dessa.meeh i feel you. Gus died on April 1st. I’ve had good moments and then weepy sad moments when I can’t swallow, my grief is pulling so hard on my heart. I can talk about him with my spouse briefly without crying. I offer you one of my many hugs I have received from other AA members. I’m glad you’re here and deeply saddened by your loss.

So sorry for you loss. It hurts so much.
Baby:

Almost two months to the day. It is hard to believe; simultaneously it has gone by too fast and too slow. There are days where I still cry but recently some of the tears haven't been only sadness. Over the last couple of months, I have been connected to some amazing groups who have helped me and my boyfriend through our grief. In addition to Avian Avenue, one of those groups I was connected to was Second Chance Bird Rescue (SCBR) in Oregon. When we visited about a month ago, we realized that our family wasn't complete without a feather baby in our home.

This last week, we increased our eclectic, mismatched family by two. Frankie, our 9-year old blue and gold macaw has adapted amazingly even after the traumatic experience of losing his human dad last year. He is so so funny, loves watching people out the window, and dances his little heart out. We love him saying 'hello,' 'step up,' and 'hi, Frank.' He is the life of the party and he has us wrapped around his little talon.

Now, we were only expecting to bring home Frankie. But while at the rescue, we were asked if we also wanted to give a home to Ricky, a 51-year old half-blind, half-deaf, and arthritic blue-fronted Amazon. I had gotten to know Frankie through posts regarding his story and meeting him the first time we visited the rescue. His resilience amazes me. He was kept in a tiny cage the majority of his life, abused and malnourished. He arrived at the rescue on the brink of death; they nursed him back to health. And yet he is still sweetest parrot you would ever meet, though he definitely has his little old man tendencies of being ornery and constantly napping. We weren't expecting to bring him home, he wasn't even up for adoption. But I know this was Kiwi touching the heart of the rescue and touching ours as well so we could give him a loving home and all of the attention he deserves. I'm sure she's there watching us and saying "see, I gave you an adorable grump so you wouldn't ever forget me."

The work that the team does at SCBR is so incredibly wonderful. It is clear that those birds are well loved for as long as they are at the rescue; they make sure the homes that are thinking of adopting are the best for their parrots. They do so much for abused, sick, old, or scared birds that come into their care; their birds have a second chance on life.

We won't ever forget Kiwi. Frankie and Ricky are not meant to be replacements. In fact, without Kiwi I don't think we would have another parrot. She taught us so much about the love and loyalty these creatures bring to our lives. I miss her so so much. I wish she was here to miss these guys. But now, our home is louder, full of fluffs and feather dust just like it is supposed to be.
S

Dessa. You and your family are very good people, and it is difficult to put in words how I find important what you are doing. I wish all the best to you, as well as Franckie and Ricky. Meanwhile I am sure Kiwi is watching all of this and is happy on the other side.

You are an amazing person and an inspiration.

SunTruth said:
Dessa. You and your family are very good people, and it is difficult to put in words how I find important what you are doing. I wish all the best to you, as well as Franckie and Ricky. Meanwhile I am sure Kiwi is watching all of this and is happy on the other side.

You are an amazing person and an inspiration.
Click to expand...

Thank you so much for saying this. I truly don't know what I would have done over the last two months without the amazing people on AA. Even though we have never met, you all have been so instrumental in helping me and my boyfriend through our grief.

Please see the newest members of our family below.

All the best to you and these new family members!!

It sounds like you have a lot of love to give. I'm glad you can use the knowledge and skills that Kiwi taught you to give Frankie and Ricki a good home.

Kira
People have forgotten this truth. But you must not forget it. You become responsible, forever, for what you have tamed.​
You must log in or register to reply here.