I made a video of Kev, my miracle tiel, for reference. In case anyone else is in a similar situation and needs some light at the end of the tunnel.

enigma731 said:
I made a video of Kev, my miracle tiel, for reference. In case anyone else is in a similar situation and needs some light at the end of the tunnel.

made me tear up...made me think of my other grey that was in same boat. But he lived out to age 50 but was always handicapped, my special needs bird, and my favorite too! God I miss him !
Current birds-Grey Grey

55 Tag..R.I.P. My precious babies.....Plus took in, fostered and found good homes for 26 rescues, abandons & surrenders over the years.

birdell, daughter has taken in.

Wow!
Watching Kev in the first bit of footage brought sad tears to my eyes.
Seeing how much progress you two have made at the end of the video brought happy tears to my eyes!

Well done both of you

incredible!!! So wonderful and miraculous! All your hard work and Kev's determination! 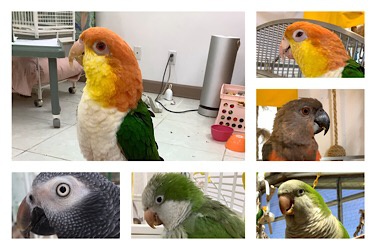 Honestly it was like 99% her, I just provided the support. And the scritches.

"An eye for an eye and the world goes blind." -Unknown​
C

Happy you did not give up on her. Can you describe briefly her medical care and then your care and "rehab" for her?

Brittany0208 said:
Love the video! So inspiring, that with love and patience, anything is possible. Thank you for sharing. It gives me hope for Java.
Click to expand...

And your threads about Java helped me figure out her cage adaptations initially! So hey, full circle! <3

enigma731 said:
And your threads about Java helped me figure out her cage adaptations initially! So hey, full circle! <3
Click to expand...

@enigma731 thank you so much for posting this. I've been down a couple of days and your video has helped put some fire back in me. Just telling your story would not have been half as effective.
This video should be set as an example as to why we should encourage peeps to take in special needs birbs.
BRAVO!

CeciliaZ said:
Happy you did not give up on her. Can you describe briefly her medical care and then your care and "rehab" for her?
Click to expand...

Sure! So I guess the first thing to know is how she got hurt. She was out of her cage and flew into the other room, so I didn't see what initially happened. But I do know that something spooked her and by the time I got out there, she was flying around in a blind panic despite the fact that she's familiar with my home and was previously a very good flyer. She flew into the walls several times before falling to the floor on her back. She initially seemed fine, but several hours later lost the ability to use her feet (fortunately I already had her at the vet when that happened).

The beginning of that video is actually about a week after the injury. She was initially hospitalized at the vet for fluids and gavage feeding because she couldn't even lift her head. She got Metacam at the highest published dose, which for her was .1ml twice a day (not sure how that shakes out in terms of mg/kg but really you'd need a vet to advise on that anyway). She initially also had trouble with her gut motility, which is something we see a lot in human brain injury patients. So she also got l-glutamine, which is a supplement that supports cell junctions in the intestines (also used in human patients with neurological injuries). She lost 20g in the first 10 days after her injury despite gavage feeding, and that was really the scariest part of this whole thing. She started eating solid food again after she came home from the hospital, and although she continued having issues with her gut motility (she would strain to poop and it would be a frothy mess that smelled weird), she eventually stabilized and started gaining weight back.

She stayed on Metacam (though at half the initial dose) and l-glutamine until I think around Christmas? So about 3 months. We tried her on steroids at one point when she wasn't eating, but it made the gut motility issues worse so we stopped after a single dose.

In terms of rehab, I really just provided supportive care. We clipped her wings pretty early on because she had no motor control and we were afraid she would take off and hit her head again, which probably would have been fatal. I started her off on a flat bottom of the flight cage, padded with towels. I have a double flight and I put the divider in so that Kev was right next to her sisters but in her own safe space. I took her out at night and she slept in a soft-sided carrier. Gradually I started introducing perches (as you can see in the video), initially very low down. Then we moved to perches slightly higher. After that, I did a series of ramps and platforms, then took the ramps and platforms out and just did perches very close together so she didn't have to climb many cage bars. Now we're at a setup where she can hop/fly between most of her perches because her flights are coming back in and that's what she seems to prefer. She CAN do cage bars now, but it's somewhat clumsy and she seems to have either nerve pain or odd sensation in her feet, so she prefers not to. I don't know if she'll ever be 100% normal but I'd say she's about 90% back to where she was before. Which is amazing -- you would NEVER see this kind of recovery in a human who had an injury of similar severity. The best thing about Kev is that she's incredibly determined, so she basically rehabbed herself. All I had to do was provide an environment that was safe but also a bit challenging for her current ability, and through a lot of trial and error, we progressed together.
Last edited: 3/17/19

Ripshod said:
@enigma731 thank you so much for posting this. I've been down a couple of days and your video has helped put some fire back in me. Just telling your story would not have been half as effective.
This video should be set as an example as to why we should encourage peeps to take in special needs birbs.
BRAVO!

Ironically, Kev was not special needs when I adopted her! She picked me after not wanting to interact with pretty much anybody else, so it was really clear, but I kinda felt guilty about taking in a relatively "easy" bird who I felt could have gone to a less experienced owner. Little did I know, the bird who was to have a severe brain injury a few months later chose the brain injury expert! I'm not very superstitious but I do have to wonder if she knew somehow.

Kev is a wonderful guy -he really knows how to fight and excel.

I hope Kev's story and video encourage people not to give up on their bird. They will fight for life if given half a chance.

@Danita Kev reminds me so much of Jamie (yes, he is still my bird hero).

enigma731 said:
I'm not very superstitious but I do have to wonder if she knew somehow.
Click to expand...

Everything happens for a reason.

Such an inspirational story. Well done.

I never knew the backstory so was unaware of the accident. However I still salute you and Kev for your determination. Tau was recovering from a head injury herself when I got her, so I understand the trials you've both been through. It's too late for us to make a video story, and I hope and pray I'll never get the chance to. Kudos to you.

They call Me crazy like its a bad thing!

Avian Avenue cause being a crazy Birdlady is normal here

The flock at the Feathered Funny Farm!

Heart breaking and so inspirational! All in God's plan for why Kev chose you to be her person. Thanks for sharing this and having the foresight to document her progress. It will without doubt encourage others with injured birds to have hope and dedication to bring quality of life to a special little being like yours!

Pretty sure the brain can rewire itself after injuries like that if the affected creature wants to fight and try to do things which it seems is what Kev did and you just helping him and encouraging him probably made a world of difference seeing how your his chosen one.