FINALLY... 7 Years of Plucking No More!

I really can't stress the importance of a healthy diet!! Most here will say "I am feeding my bird a very nutritious diet." But I can now argue, that most likely what you think is healthy, is far from accurate. I was one of those people, until over a month back.

Let me start off by saying I have a 21 year old, male blue fronted amazon. I'm the 3rd owner, and based on what was told to me, the previous owner had him for 4 years until declined health made it where he was relinquished to a rescue. He also was a "seed junky," with a plucking problem.

About 2 years back he finally started to eat a lot more healthy. Still gave him seeds, but only later in the day, after he'd eaten his chop; vegies, and fruit, with a few nuts.

I made sure he had toys to play with, full spectrum light, continued showers, etc. Occasionally he would have issues with his liver, so I'd give him milk thistle, which at the time seemed to help. I knew this as a problem, because about 4 years back he had an episode where he almost looked like he was having seizures (which they weren't). After doing a blood panel, found out his liver enzymes where too high, and the toxins were causing this behavior. Got him under control, but as mentioned occasionally he would have problems, which milk thistle cleared it up.

Took him to the vet on multiple occasions, because he was always nasally and stuffed up, as always having puffed up cheeks. The doctor (mind you I will never fo back to this vet) acted like everything was ok

So fast forward to around a month back... Sydney (my bird) started doing this seizure like behavior, angrily tearing at his back, chest, and thigh feathers. I then started him onhis milk thistle regiment. Two days later he wasn't getting better. I tried to wait it out, due to the fact I was hurt badly in an accident, I'm unable to work, and have medical bill's through the roof. So, I simply had no money to take him to the vet. I finally knew this "milk thistle " therapy wasn't working; taking him to a new vet, whom is well known for specializing in exotics. She was an hour away, but I wouldn't take him back to the original local vet!

Long story short, my beloved baby, is a very, very sick bird. He has been diagnosed with atherostlerosis (enlarged heart) arteries are full of plaque, enlarged kidneys, and some apparent (old) trauma to the neck region. can I just tell you, I cried like a big fat baby!

Now this brings me to the whole "diet" discussion! Birds like Sydney fly an average of 70 miles per day, so all the fruits, and nuts, and other items are good, but that's if they are flying many miles each day. Even those most loved and spoiled birds aren't getting the needed exercise, so even those healthy nuts, such-as walnuts, pine nuts, etc. Are terrible for them, and should only be given as a treat. I was giving Sydney heart healthy berries, like - blueberries, blackberries, raspberries, and cherries. But was told "absolutely not!" Fruit is to be given once weekly, and a very little amount. He is now off seed completely and on a very, very strict diet.

So what I'm really hoping is that I can some how influence others to really take a look at what they are feeding a "non-flighted bird? And I mean non-flighted to all over birds that arent flying miles per day.

I had no idea about "atherostlerosis," and HOW COMMON it is in parrots. Especially Amazon's, and African Grays. This is generally a disease that kills birds instantly, and you dont ever know it's a problem until you find your bird dead.

Sydney is currently on tramadol, and gabapentin. And I've been rubbing coconut oil onto his bare skin... and HE IS NO LONGER PLUCKING! So if you have a bird that plucks, I'd guess to say most likely it is a symptom to a far greater problem. But, for some pluckers, I do know can be a mental thing.

PLEASE TAKE THE FEATHER PLUCKING SERIOUSLY! I am one of the very lucky few that still has a living bird. As mentioned, you usually dont know there is a problem, until it's too late.
Last edited: 2/8/19 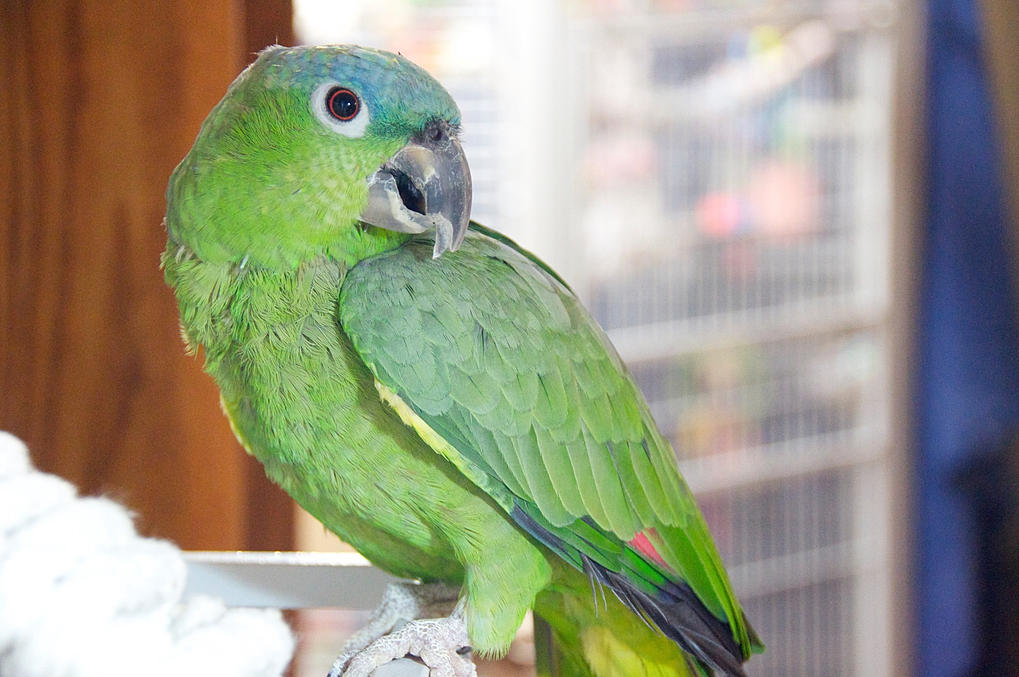 Thanks for sharing your story, and I hope Sydney will continue to improve! So what kinds of things is he eating now?

Words of wisdom to all bird owners. Thank you.

Thank you for sharing this!

Thank you for sharing this with us.

I hope Sydney can get to the point where he may not need these meds anymore!

@glxpassat I am interested in the diet you are now feeding Sydney. Also, I'm curious about not feeding berries. Did your vet explain why?

I'll chime in. What is the diet?

Secret is on a low fat one and is on hepato for her medical issues.

We can only do what we know and learn. Thanks for sharing.
There is a great deal of wisdom available here on AA from experienced bird owners. They have helped me to understand that even a "clueless" soul can muddle through with the right amount of guidance.

Gabapentin has been a miracle drug for some of the pluckers and mutilators I've known. Response definitely varies, though.

Thanks for sharing, hes lucky to have you.

Sorry for the delay in my response. I've been dealing with some kiddo issues. But I'll update ya more on his diet information soon.
You must log in or register to reply here.