Brittany0208 said:
Fid name: Java
Species: Greater Vasa
Age: 9 years old
Sex: Male
Weight: 430 grams
Import or hand fed: Hand-fed
Personality/vocabulary or what makes your fid special: sweet-natured and rather passive. Has been a breeder his entire life until 6 months ago. He's learning what it means to have a family. Also, he's missing his left leg from a racoon attack in his past. He does not talk.

Wow he is bigger than I realized. And very handsome.

zoo mom said:
Wow he is bigger than I realized. And very handsome.
Click to expand...

@Shezbug see if this helps!

Whew! Looking through this thread reminds me how big 'tiels actually are! Bigger than a Quaker and only a bit smaller than a Sun Conure! 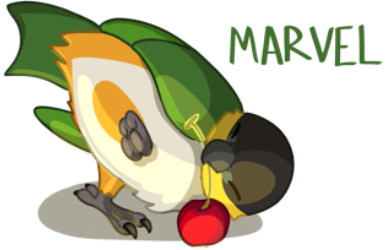 This terrible goblin's stolen my heart (Thank you so much @SkyLark!)

It amazes me! Daytona, SdC, is technically in the same class as Sherman, WCP! Daytona is mostly feathers whereas Sherman is not. We're talking 104 grams to 206 grams and Sherman is on a diet! Daytona's beak is about half as big as Sherman's beak. (Of course, Daytona is about a million times as loud. )
Glenn, IRN; Sherman, WCP; JoJo, budgie; Tommy, budgie; Daytona, SdC; Sir Lancelot, GCC; Duchess, BCC; Chirps, GRP
Shared album - Leslie Albright - Google Photos​

This isn’t a soda can but a great comparison difference between a TAG and a CAG.
Luna next to her friend Echo. Luna is on the Left (TAG) and Echo is on the right(CAG)

FlyingMacaws said:
great comparison difference between a TAG and a CAG.
Luna is on the Left (TAG) and Echo is on the right(CAG)
Click to expand...

No fair. Echo's cheating holding out his wings.

Here's my two! Sorry for the blurriness 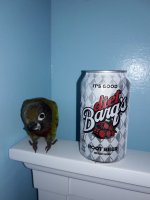 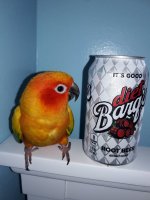 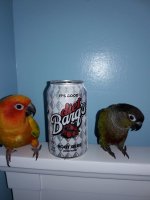 Why is it that the gcc has a guilty look about him and the sun has the "it's mine" look?
I love AA for the many people I can call friends and family. My AA family has given unbiased opinions, has cried with me in my sad times, rejoiced with me in my happy ones and laughed at me when I laugh at myself. And, as more than one person has said, my fids aren't "just birds" any more than all our other companion creatures are "just a ______". 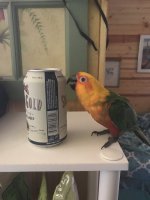 Name: Tibs
Species: Jenday Conure
Age: 10 months
Sex: Male
Weight: 113 grams
Import or hand fed: Hand fed
Personality: Enthusiastic, and a chow-hound. Tibs is playful and curious about the world, he likes to explore and loves to be with people. He is the definition of a people-bird and can be a velcro bird. As you can see from the picture, everything and anything new can be a toy and was obviously meant for him to have. He has his cuddly moments, and he does enjoy scritches but his life is all about play (and food).
Vocabulary: His vocabulary of clear words is limited (What, hey, wah) but he laughs and makes kiss-y sounds.
Last edited: 7/23/19 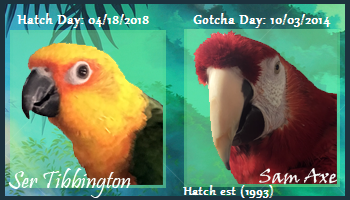 This is the closest that Tootie would get to the can, and it is a tiny bit taller and skinnier than a pop can. If there's pop in the house, I drink my weight in it..

Name: Tootie
Species: Nanday Conure
Age: Unknown. Estimated between 5-10 years
Weight: 125 Grams
Import or Hand Fed: Assuming handfed?
Personality: So far, very cautious. He's been here almost 3 weeks, so that's to be expected. I believe that he is logical enough to know that if we haven't killed him yet, we probably won't, but his emotions get the better of him, and he keeps his distance most of the time. He gives painless angry nips if you reach for him and he's trapped, but if he can get away, he'd rather do that. He does not like when Tikki flies around and he cannot, and he insists on being with Tikki when out of his cage. So far, the only sign that anyone has ever spent any time at all loving or training him is the fact that if you tell him that it's bedtime, he'll go back into his cage on his own. He's independent, stoic, and exactly what we hoped for in a rescue bird. He loves to yell, and it sounds like some angry man trying to get someone's attention. We like to join in and yell with him sometimes. He's the best little Tootie in the whole world! 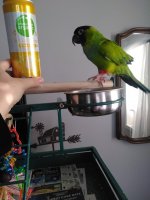 "Chipper" the Umbrella Cockatoo,
And "Bismo" the Senegal.

Tootie is so cute! I’ve been hoping to see a Nanday size comparison for my own curiosity.

TikkiTembo said:
He's bigger than I thought he would be @BeanieofJustice , I'd guess bigger than a Sun, but smaller than a Blue Crowned.
Click to expand...

Oh, interesting! Thank you! They’re just gorgeous birds. From their appearance in pictures, I’d thought that their body size was similar to the Golden Conure I met but I saw an image recently and Nandays looked smaller than that.

I cant believe this thread has been going for almost 9 years!! That makes me so happy!!
If you are curious, I dont have as much time to be on avianavenue

but Paco is still the love of my life and the bane of his human brother's existence.

Edit: I couldn't get Kiwi anywhere near the can

< Blizzard (F)
You must log in or register to reply here.