Greetings, like most folks, I found the sight because I was looking for the answer to a behavior question as I learn About my Conure. Bandit is not my first bird, but is my first Conure. We think it’s a he, and he has brought us great joy and a couple scares too.

In reading the posts on sleep patterns, I wonder if anyone has experience a bird being so sound asleep you think it might be dead!? This has happened twice and has freaked us out a little. The last time he was on top of his hut wrapped in his curtain like a burrito of sorts. Although, I heard him up earlier that morning, he went back to bed. I thought he had suffocate himself. After several attempts to nudge him, I finally pulled the curtain back and he popped down irritated I was in his cage and woke him up!

Also, I gave him one of those triangle tube-like hut that he doesn’t sleep in, but on, under a curtain. I noticed some picking of the fibers. Should I remove this? Not sure he is eating it, or just making it his own.

Thank you in advance for your responses.

Welcome to the forum!

@webchirp ?
Owned by Elvis, the 'too

Yes definitely remove that snuggle hut, he can be swallowing fibres from it.

Some birds have the tendency to scare the crap out of you when they sleep.
One of my past greys would sleep on its belly so sound you'd think it was dead...
A senegal I had, daughter has now, would sleep on its back on top of cage.
Freaked me out one time till I learned he just liked sleeping like that.
Current birds-Grey Grey

55 Tag..R.I.P. My precious babies.....Plus took in, fostered and found good homes for 26 rescues, abandons & surrenders over the years.

birdell, daughter has taken in. 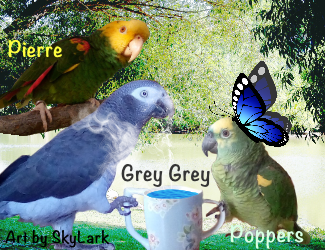 Welcome to you and Bandit.

Buddy, our Nanday conure, will sleep on her back on the floor. I freaked out the first time I saw her doing it...
A completely-owned person of:

If you notice your bird picking at the fibers, definitely throw that thing out. There are sleep tubes make of cardboard (much like the bird bagels if you've seen them).

When I uncover him, I see his little tail poking out. It's so cute.

Welcome to the Avenue!

Yes definitely remove that snuggle hut, he can be swallowing fibres from it.

Beau sleeps on his back, but I know he is alive because he coos very softly in his sleep. Wish my hubby's snoring was that pleasant.

Annie's Mommie said:
Beau sleeps on his back, but I know he is alive because he coos very softly in his sleep.
Click to expand...

Buddy grumbles in her sleep...
You must log in or register to reply here.