This is my boyfriend's 16-year-old watermelon. Her name is Chako which means high octave in a different language. She's simultaneously the friendliest and angriest lovebird I've ever met. 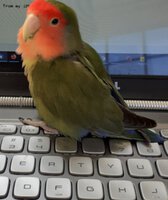 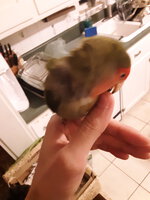 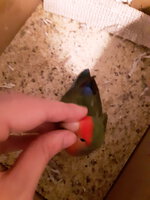 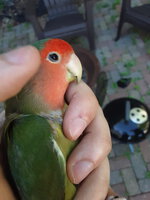 @Zara Thanks! She's the queen of adorableness.

He many lovebirds have you met? 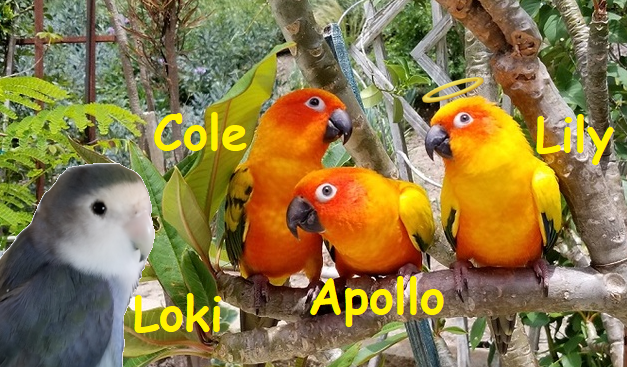 @DoubleTake I've always been a budgie owner. The only other time I've met lovebirds was at a pet store that I rarely go to with a friend who was buying hay for their guinea pigs. They seem skittish and not hand-tame. There was an energetic one in there, but wasn't really angry as much as curious nips.

Chako's such an attention hog that when I was visiting my boyfriend's house with friends, she would fly over to the dining table when we were gathered all around. She's also bonded enough to my boyfriend and his family (she thinks of them as her flock) that when she's outside with them, she'd usually be with them (though I wouldn't normally recommend someone to free-flight small birds). She also likes to attack stuffed animals, towels, figurines, and pretty much a lot of things.

Eek, I wouldn’t let my lovebirds fly outside no matter how bonded they are to me!

Way too scary. He’s not afraid something could happen to her?

fluffypoptarts said:
Eek, I wouldn’t let my lovebirds fly outside no matter how bonded they are to me!

It only takes one spook, maybe a bird flying overhead, a helicopter, car sound, weird bang in the neighbourhood etc (the list is endless). I encourage your guys to rethink that. Invest in a little cage so she can go out safely, or spend time harness training.
B

@fluffypoptarts @Zara I'm the same with small birds. Scary for me too. >.> I'd never let them fly outside in the open. The most I'd do with my budgies is walk outside with them with the birds inside a pak-o-bird backpack.

He doesn't usually take her outside, and only happens rarely. She usually prefers to be indoors, though the outdoors don't scare her at all. He's attempted to put a bird harness on her before, but she doesn't like harnesses. I personally wouldn't free-fly any bird smaller than a cockatiel.

BlueJay said:
and only happens rarely. S
Click to expand...

It only takes one time.
Maybe you can make him understand? Explain the dangers to him.
I just don't want anything bad to happen to her.
B

@Zara I bought it up before, and I also known him long enough and he's knowledgable with birds enough that his lovie isn't in danger. Freeflying small birds isn't a very normal occasion, not to say it isn't impossible. It's not something I'd recommend unless they have professional training in it. I also know someone who professionally free-flys cockatiels on top of free-flying cockatoos and conures.
You must log in or register to reply here.