It is with great pleasure that I announce the
Celebirdy for the month of January 2019,


Blu and I are very excited and thankful that he was chosen as celebirdy of the month! He has always believed that he was a celebirdy and now he can say he had the official title.

1. How did you acquire your bird?

I got Blu from a bird fair, kind of on a whim. I had been considering a green baby Quaker for a while and was looking at a batch of 7 there but while I was contemplating someone else came along and bought them all.

I told myself it must not have been meant to be so I continued to walk around and then I spotted Blu on a perch, away from the other birds, at a different vendor they had there.

I always told myself I would never get a blue Quaker but just because I was bored I asked how old that Quaker over there is? They plopped him on me and told me to go away from his perch (Quaker territorial behaviour) and when I did he came alive. Started laughing and dancing and said I love you.

The breeders were surprised by how much he liked me and then went on to tell me that they had to come to Chicago because it is now illegal to sell Quakers in Wisconsin. So without even thinking I said I'll take him. I kind of regretted it for a few months but now I know he was the best thing that could have happened when it did.

Blu is the name he came with. I've wanted to change it but he does know it so I don't think it'd be right. He is 3 years and 9 months old, and a DNA'd male.

Not really, besides being almost human like. We've never really worked on tricks.

Blu is a little picky but he likes his sprouts, and veggies on a skewer. He only eats pellets that are moistened so we have to eat those at designated times. He especially likes the seeds from peppers. He loves avicakes and pumpkin seeds and picking the safflower seeds out of nutriberries.

Just a couple of weeks ago when I told him it was almost time to go night night he waddled over to my face with attitude and said - you talking trash?

He has completely changed my life in a good way. This is going to be really deep. I had got to the point where I thought I didn't want to live anymore and even had a plan for the future, if you know what I mean.

Then one day I had a health scare and truley believed I might die. I realized that day that I can't and don't want to die because Blu depends on me.

Besides completely changing my outlook on living he has also made me change my everyday attitude. I noticed quite early on into having him that he was only happy if I was happy, and there was no pretending or faking it. If I was sad or the slightiest bit angry he would continuously squawk in displeasure and even bite me. I realized that all he wants is for me to be happy!

And so I deliberately changed my mindset and now I am! Thanks, Blu!

That even though Quakers are not big birds they are not the easiest species. They have a huge attitude and are incredibly intelligent so you have to know how to go with the flow and "change the subject " so to speak, to make them forget their anger. Lol.

He's pretty chill actually. He spends his morning on my shoulder while I get ready. Then when I go to work I watch him on camera and he naps and eats and sometimes weaves, if he's hormonal, but he's usually just chilling waiting for me to come home. Then we spend a few hours together before bed.

He hates when my hair is wet, though he is getting better about that these days. He still gets ticked off when I walk in with wet hair but he realizes that he should just keep his distance and give me the stink eye instead of lunging at my face and taking a chunk out. We've come to an understanding, haha.


10. If your bird talks, what is the most surprising word or sentence it has said?

He says alot of surprising things but one thing that comes to mind is that for a while I had to help someone give their dog an insulin shot at night. So I would tell Blu, I gotta go give the shot, I'll be right back. And now that I'm not helping with the shot anymore sometimes when I'm about to leave the room he says - I gotta go get the shooot. And it sounds funny when he says it but also I wonder if a random person heard that they'd probably think he's talking about a shot of whiskey, tequila, or a shotgun or something. Who would guess an insulin shot? Lol

No doubt about it...egg. He is an egg fanatic!

Oooh, I should probably add some photos 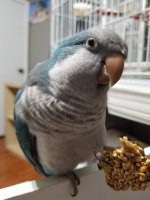 I love that last photo! It shows attitude.

Great reading and I totally get how they change us.
There is a great deal of wisdom available here on AA from experienced bird owners. They have helped me to understand that even a "clueless" soul can muddle through with the right amount of guidance.

"Just do what the caique wants, and nobody gets hurt...." I love Blu! Congratulations!
Owned by Elvis, the 'too

Congrats! He is beautiful!

What a cool story! Congratulations @CrazyBirdChick and Blu!

Wonderful write-up, enjoyed the the read and fab pictures of Blu !
:chipmunks:

Blu is such a character!! Thank you for your honest and thoughtful interview. I think Quakers are just amazing and funny birds.

I've noticed the same thing with Waffle--if I am sad or depressed, she gets pretty upset. Sometimes I will go in my room away from her if I'm having a bad day, but more often she is able to get me to genuinely smile. Animals are so wonderful and healing.

Wow that was a very touching interview, loved reading it and I think I totally understand where you are coming from with some of it, I thank Burt each and every day for the gift he has given me by just being in my life. I felt I had nothing to look forward to or be happy about till Burt was here and now I need (and want) to be happy all the time for him or things just do not work right. Thank you for sharing so much of your story and the pictures are wonderful! Congratulations to you and Blu! Very very well deserved banner

@CrazyBirdChick
I too can relate to your story w/ Blu. Buddy has made me feel like smiling & laughing all the time. My situation was similar too if you know what I mean. Thanks so much for your sharing so deeply!

that puffy poofy pic too!

Macawnutz said:
Besides completely changing my outlook on living he has also made me change my everyday attitude. I noticed quite early on into having him that he was only happy if I was happy, and there was no pretending or faking it. If I was sad or the slightiest bit angry he would continuously squawk in displeasure and even bite me. I realized that all he wants is for me to be happy!
Click to expand...

This is so profound. Our companion birds do tune into their person's feelings. Non-bird people don't think that is possible and scoff when you mention it...the conventional wisdom says only dogs and cats are capable of it.

Clueless said:
I love that last photo! It shows attitude.
Click to expand...

Congrats to you and Blu! I really enjoyed reading your interview.