So, I thought I'd derailed the baby train, but now I'm not so sure.

Yesterday, when I was sweeping up the seed litter around Esmerelda and Mustrum's cage, I found what looks like a shell fragment that looked kind of Robin's eggish to me. But, I'm reasonably sure there haven't been any Robins in my apartment, in well, ever really.

So, now I'm wondering if Esmerelda, who very intentionally doesn't have a nest, did the best with what she had and it ended up smashed on the floor. I'm hoping not and that I just tracked random small bird egg detritus into their enclosure, but. . . So, does this look like a fragment from a Bourkes egg?

I've been really diligent about getting their lights out for a full 12 hours, and as mentioned I've limited their access to anything that could be used as a nest. But, I normally give them a small dish of egg food a couple of times a week, and mostly they pick at it, but today one of them (I think it was Esmerelda, but it's hard to tell from the back) has been seriously gorging on it - like it's better than millet. And we all know *nothing* is better than millet.

Is it time for me to just give her a nest? I got one just in case I might need it, and I have Bourkes sized dummy eggs, but of course I'd prefer if she just decided to prioritize her studies at this time in her life. 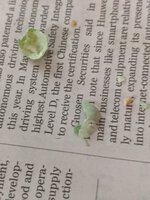 You made me google looking for the color of bourke eggs. Everything I found either showed white eggs or described white rounded eggs. Robins eggs are blue and about the size of a quarter so I doubt what you show are egg fragments or a stealth robin made it's way in to lay an egg or leave parts of a shell. To me, it looks like a shell from an eaten pea, do any of your seed mixes have dried peas in them?

Here's a robin egg next to a quarter. As far as hanging a nest box... that will only encourage your bird to go to nest... including feeding the egg food.

No, all parrot eggs are white.

If you're not a breeder, providing a nest box is never a good idea.

Mockinbirdiva said:
You made me google looking for the color of bourke eggs. Everything I found either showed white eggs or described white rounded eggs. Robins eggs are blue and about the size of a quarter so I doubt what you show are egg fragments or a stealth robin made it's way in to lay an egg or leave parts of a shell. To me, it looks like a shell from an eaten pea, do any of your seed mixes have dried peas in them?

Here's a robin egg next to a quarter. As far as hanging a nest box... that will only encourage your bird to go to nest... including feeding the egg food.

Thank you, that's really helpful to know. I'd looked at my dummy eggs and they're white, but I thought that, if there was a weird thing that sometimes grass 'keets lay different colored eggs, someone on team Bourke's would have probably experienced it or heard about it.

I didn't really think it was a Robin's egg, I just mentioned that to indicate that it looked a lot like the eggshell fragments I see on the ground in the springtime. So, similar to the egg of a small, wild bird.

As to not feeding them egg food, I thought that was a normal supplement. They get seeds, pellets, and an assortment of vegetables and other treats (but not fruit. Fruit is apparently evil. I don't have the heart to tell them that peppers, which they love, are actually fruits. It would break their tiny hearts.). Until very recently, I've provided it once or twice a week, but they mostly used it to create bio experiments in their water dish. It's just this week that at least one of them has seemed really drawn to it. And nesting or pica, I usually assume that if there's something they seem to really crave, maybe that's something they need. Except millet, obvs. That's just greediness.

Good to know on the nest box. For some reason, I'd gotten the idea that for those of us who aren't breeders the best thing to do was to try to minimize any environmental cues that make them think it's the time of the season. But, if the female seemed really committed (like if that was an egg), then the best thing to do was to just give her a nest, swap out the eggs as they appear, and let her play nest until she gets bored with it. But, if the answer is just don't that's even easier.

Feather said:
No, all parrot eggs are white.

If you're not a breeder, providing a nest box is never a good idea.
Click to expand...

Good to know, thanks. Definitely not a breeder. For some reason, I'd gotten the idea that sometimes they get far enough along in the cycle that the only way to stop her from laying eggs is to let her think she's got a full clutch, even if, through a bit of legerdemain, the eggs she's caring for are actually plastic.

But, since I'm not sure how I'd distract her if she mostly didn't leave the nest ("look! over there!" probably doesn't work that well with the less interactive birds), it's definitely easier if I don't have to do that.

What brand of pellets do you feed? Without knowing how old Esmerelda is ( if she is young and approaching breeding age) I would make sure the pellets she does eat have a sufficient calcium and Vit D3 needed for the egg laying process if she is determined some day to lay. Number one to avoid egg binding - too thin of an egg shell to pass an egg. Frequently flying time will aid in keeping her body in condition as well. I've admired the beauty of bourke's but have done little reading on them concerning their diet. One site I did read concerning feeding egg food ... the breeder did not offer egg food during the winter months but instead offered in the spring prior to breeding season. With wild birds, food becomes plenty in the spring along with extended day light hours triggering breeding urges. I would suggest reading more on the subject of egg food to determine if you need to keep it in their diet. Sprouted grains would be a better choice nutrient-wise.

If.. she is determined to lay she'll lay where ever she wants in her cage. I still would not offer a box. She could choose a corner ( or where ever) to lay. In that case you would switch the real egg for the dummy egg as she lays and let her have her brooding cycle until she loses interest in her eggs. At some point she'll leave the nest to eat and this will be your opportunity to switch the eggs.
T

They get the Lafeber's Premium Daily Diet and the Zupreem Natural - sometimes alternating and sometimes a scoop of each mixed together. I can't really tell which one they like better so I figure I'll offer both and they can choose. They're not super enthusiastic about their pellets, but I put the pellet feeding station in their favored place to eat and I know they eat some of it since I check for pellet powder at the bottom of the cup when I clean out their dishes. They're such little funnies - some days they start out the morning by checking out what's in their pellets tray and other times they hop down to the floor of their cage to see what the daily special is. They like leafy greens, especially chard, especially especially rainbow chard, but they'll try most things.

As to the sprouted grains - they don't seem to like it freshly sprouted; I think it was a texture thing. But I found some sprouted millet, quinoa, etc and it looks like Nuts.com has some other sprouted grains I can add into the mix.

As for the flying, a week ago or so someone posted a great article about birds' wing types and how that ties into the way they fly. They do most of their flying in their cage, which I didn't think would be big enough (it's a flight cage, but seriously, they evolved in the wide-open spaces in Australia.). But they're like little short-track skaters; the zoom back and forth, up and down, looping around the divider. Surprisingly acrobatic. Still, I am trying to schedule their time outside their cage with then the zoomies typically hit so they have a longer flying course.

And as far as the age, I got them from the Finch Farm (yeah, I know, but they're both little darlings so I can't really regret it), so all I really know is that she was less than a year old in October. But, definitely young.

Thanks for your time with this. I felt like I did all the research I could possibly need to do before they got here and even now I expect google to auto-add "safe for birds?" to all my queries (e.g. what time is the superbowl. . . and is it safe for birds?) because I spend so much time checking, and even so I'm always astounded by how many things I don't know.

Kudos to you for broadening your knowledge and continuing to do so. I've not seen too many of the bourke's on our forum and the one's I have seen are quite endearing. As far as the Finch Farm. We've had some people with inquiries about them and maybe a couple of people who did acquire their birds from them. You probably know as much without my having to tell you. My only experience with them is discovering... through looking for specific bird photos not related to my species on Pinterest to find an old photo of a breeding pair of my birds and clicking on it which took me to the Finch Farm. They were using my photo, of my breeding pair, to advertise their green cheek conures. I had a very ( fun for me) chat online with one of their representatives requesting they remove that photo. I think it has been.
You must log in or register to reply here.