Hi there, I am sorry for posting again, it is regarding the same lovebird I had with issues of vomiting and bubbles in poop in my other thread.

Long story short, my lovebird have a lot of bubbles in his poop, sometimes it’s literally foam but the poop are nicely formed; no diarrhea. He had been vomiting on and off with no food actually coming out, it is more like nauseous than real vomiting. We went to the vet to culture this crop and then given doxycycline for 2 weeks; went back to culture again, same bacteria still there, vet asked to give another 2 weeks of doxycycline. Cultured again the third time, different bacteria is still there and we decided to stop giving antibiotics as his vomiting symptoms does not seemed to be due to the bacteria. Sometimes he can control the nauseous, thus the vet thinks it might be behavioural. Poop culture shows no bacteria despite having alot of bubbles. We gave him probiotic everyday but it does not seemed to help with the bubblish poop.

In March he had the same issue but miraculously recovered by himself while waiting for culture report. In March, we found that he have this small lump(soft) in his abdomen, vet thinks it should be gas since his poop have a lot of bubbles. We did nothing about it and the lump did not grow so it probably is just gas.

Right now after all the episode of antibiotics, we realised that he have another small lump developed until his middle bone. The vet thinks that it’s probably tumor in his liver and thus it would explained all this issues of being nauseous.This lump have slowly developed in 2 weeks and seemed to be quite big. I was actually wondering if it was tumour or if it was a omething else as it seemed not too solid and if I press, it can be pressed (although I wouldn’t dare to use too much force).

If it was fluid or something else, do you think it could be taken out from that position in this abdomen?

Also, I managed to bought candida test kit online and did the test for him, he seemed to be positive for candida, although I don’t know how creditable is these test kit since I bought it off the net. However his crop culture did not mention anything about candida…

I was wondering if anyone could advise me, if he have yeast infection like candida, would it cause him to have this lump in his abdomen?

Also to add on, he have yellow urine but sometimes clear urine, urates are white and poop are nicely formed.

Appreciate any of your replies. 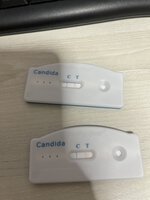 Get a second opinion honey..meanwhile just keep him happy ..warm..and love on him..
You must log in or register to reply here.