The possibility of rehoming Echo

Sarahmoluccan said:
I'm feeling alot better about things today. I did have a lovely chat with a woman was very supportive and might know someone who could help. And a couple other people stuck out in a good way too. We'll see what happens but I'm optimistic that if I need someone for a short term foster I'll be able to work something out. And I even more optimistic that I'll be able to keep Echo longer than I thought I would after I talk with my mother. Probably atleast a year, maybe even longer. We're not completely out of the woods yet. But it feels like we are making so progress. I haven't felt this good or hopefully in a long time. I definitely went to a very dark place for awhile. Its nice to have hope again

Thankyou you guys for all the support

During the dark days of my life, this inspirational passage I reflect upon to help me weather the storm .

I want to share it with you, in hopes it will give you strength to make it through.

You can start anew at any given moment

JosienBB said:
I'm in Toronto and I just finished fostering a bird for someone on this forum for a bit over two years. I have no cockatoo experience, but if you want we can work something out.
Click to expand...

Thankyou you so much for that offer!

I'll definitely reach out to if needed.

During the dark days of my life, this inspirational passage I reflect upon to help me weather the storm .

I want to share it with you, in hopes it will give you strength to make it through.

Beautiful passage, thankyou for sharing it

Sweet responses and things seem to be looking up.....
There is a great deal of wisdom available here on AA from experienced bird owners. They have helped me to understand that even a "clueless" soul can muddle through with the right amount of guidance.
P

Any updates on this?

Thanks for asking My father still struggling alot with getting around. Because of covid and how risky it is for my father it's really hard to meet up with potential new owners. So things are at stand still. Which is kind of frustrating.

My mom want to do some house renovations, like ripping up the old carpeting upstairs before we sell it. Which is difficult for me because I worry about Echo's safety, I'll want him out of the house during the renos. Right now the plan is to wait until next winter to do that. I'm currently saving up so I can have him boarded at the rescue Parrot Partners, as they offer that service. The nice thing about boarding him there is they have cages suitable from him. Because a major problem with taking him anywhere also is moving his cage is extremely difficult.

I'm still hoping for some kind of miracle where I get to keep him. But if I can't I think Parrot Partners is the best place he could go.
P

Yes, having patience is very difficult. It will be a 'day by day' process...

I'm sure there will be alot of dust, etc when old carpeting is ripped up! But depending on how extensive the reno will be... could the doorway be blocked off with plastic to contain the dust/ Echo put in an area far from that/ and utilize an air purifier while all this is going on? [You'd still have use of the purifier for the future]... Don't know which process would be easier and safer... so just a thought.

A more major issue I think is THE NEW CARPETING going in! So many are made w/ toxins imbedded that the area needs to be thoroughly aired for awhile [you'd have to ask someone knowledgeable], maybe even several days or more... Having this done in the winter would make this ALOT MORE DIFFICULT, since you're in Canada...

I know of a bird that passed away from a new carpet (after the owner was assured it was safe by the company he bought it from).

@Sarahmoluccan Thing of you perhaps needing to rehome Echo makes my heart ache. You have done wonders with him and I'm sure he loves you dearly.

Things have gotten much worse since I last posted. My father has been in the hospital since October 8th. It's hard to know what will happen next. He'll eventually end up in long term care if he ever makes it out of the hospital. We'll have to sell our house and are looking at a townhouse. They suppose to have excellent sound proofing. But it still makes me nervous with Echo. Things are quite a mess right now and everything seems so daunting.

Echo is doing well though and seems quite happy. He's the one thing keeps me going. Wish me luck...

Sarahmoluccan said:
Things have gotten much worse since I last posted. My father has been in the hospital since October 8th. It's hard to know what will happen next. He'll eventually end up in long term care if he ever makes it out of the hospital. We'll have to sell our house and are looking at a townhouse. They suppose to have excellent sound proofing. But it still makes me nervous with Echo. Things are quite a mess right now and everything seems so daunting.

Echo is doing well though and seems quite happy. He's the one thing keeps me going. Wish me luck...
Click to expand...

I'll keep you both in my thoughts.
I hope that you'll still be able to keep Echo with you. I've heard of folks putting thick fabrics or egg cartons on the walls to help muffle the sounds maybe that's something you could try ?
Maybe even getting rugs that you'd put on the floor and hanging them on the wall?
Tobias

I’m so sorry to hear things haven’t gotten any better, I can’t even imagine how stressful all these uncertainties and changes must be for you. I really do hope you can find a way to keep Echo with you. My best wishes and biggest hugs to you all

Sarahmoluccan said:
Echo is doing well though and seems quite happy. He's the one thing keeps me going. Wish me luck...
Click to expand...

This is why it's important for you to look into the soundproofing ideas. Just search through the forums, I've seen ideas posted through the years.

So sorry to hear about your father. That is never any fun and so very stressful. Make sure to take care of yourself as well. Don't hold the world on your shoulders. You're allowed "me" time. Not EVERYTHING has to get done when you think it does. Time is precious. *big hug*

Sorry to hear about your father.

Look at carpet stores too. I got some half inch thick sound dampening underpadding once when a neighbour complained about my rabbits hopping.

Also try to get an end unit townhome.
In His hand is the soul of every living thing. -Job 12:10

Sorry to hear your father is not doing so great.

I will be keeping you all and Echo in my thoughts, I really hope there´s a solution where you can stay together. Big hugs

Oh no! I'm sorry to learn that your Dad has been in the hospital for so long now!

I'm sorry for this stressful time with the move, too. One day at a time, and it will all get done. Just do what you can/have to do this day, and let the rest go until the next. Vent here any time you need to!

I'm so sorry, Sarah. Your Dad being so ill is terrible. I wish him well.

Zane and Echo have been such important parts of your life. I hope with all my heart that you can keep Echo.

and lots of prayers for you and your family
Forever Rocky's

Thanks everyone for your support!

I really appreciate it. Just to clarify some things we're currently looking to put our house for sale during the summer. We had a realtor friend walk through it to give advice on what he thought he would help sell it. He did think the floors upstairs needed to be done. Right now the plan is that I'll take Echo to my Aunt's and stay there while things are being done. I'm so grateful to her for that. That will be sometime after Christmas.

As far as the townhouses goes, the ones we are looking at some of them are still being built. My mom has a friend who lives in one. There are bungalow style with a basement. My mom's friend has rented out her basement and never hears her tenant. So hopefully that means soundproofing is really good. Echo would most likely be kept in the basement.

Its so hard to know what's going on with my dad. He went in because he had cellulitis on his leg again. And had fever and was starting to go sepsis. That infection has cleared up but he's still have some medical problems like keeping food down. And the doctor aren't sure why. He's had and is having a bunch of tests done. His mobility has declined steeply and currently can't get out of bed. Plus he's having delusions and confused a fair amount of the time. It's really sad to see him like this. While he hasn't been diagnosed with anything terminal the way he continues to decline his doctor has prepare us for the worse.

On happier note Echo is doing well. And is his usual happy self

He had been missing meeting new people because of covid. This year we decided it was safe enough for us to hand out candies at Halloween. Echo loved that! He got to see and interact some kids. And when each group of kids left he would say "I'm a good bird!"

One of my brother's friends came up to help get some stuff around the house done. (There is so much to do before we can sell it). She was afraid of birds at first, but Echo quickly won her over! And now he's her favorite bird. Lol. She was very nice and it was cool to watch her become friends with Echo.

Echo has been cracking me up lately when I overhear him talking to himself. I caught him once having the tiniest of conversation with himself.

Some random pictures of his cuteness 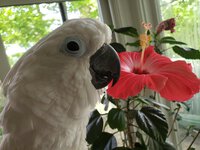 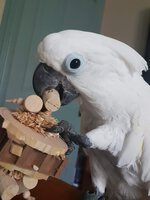 Just fyi, my mom had delusions in hospital fairly often. Doctor told me it's normal with older folks. She'd snap out when she came home.

@zoo mom, do you know why they do that?
You must log in or register to reply here.