Hi, I have been doing a lot of reading on the subject and now I regret having it done. On Thursday, May 5th, 2022, we had a vet appointment with the nearest avian vet which is in Gananoque ON. We live in Kingston ON, don't have a car and had to rely on a family member from Brockville ON. We use to have an Avian vet, but she retired a couple of years ago and no one took over.

We took Boomer our Crimson Bellied Conure in to the vet to take off his leg band, nail trimming and if his beak needed trimming. He turned 1 year old on May 1st, we got him from a breeder in early January this year at a reduced price. We do notice he has food and toy aggression, but he is my baby, I and my husband with live with it. He is very cuddly with his mama and I love him to much, daddy is his sparring buddy, bites and all.

At the vet, he took Boomer into another room and we could hear Boomer screaming the whole time. They said they would use a sedative, but decided not to. My poor baby, it really bothered us, but we told ourselves, Boomer is in good hands.

The next day, after the vet visit, we noticed he was fluffed up and he was hungry. He kept going to his seed and pellet mix and picking it up, but not eating. He was also, not eating his mash. When I called the vet the next day, I was told that they don't know what is wrong with Boomer and that they do hundreds of beak trims a year without problems. That was all, no suggestions or what to do to help feed him. We paid $257.00 for that vet visit, and if the vet had used a sedative that would have been an extra $200, which we were willing to pay.

He is clucking a lot instead of his normal nattering noise. Otherwise he is quiet most of the time, like normal.

I pureed his mash and had to force feed with a syringe, which I didn't like doing, but he wouldn't eat it on his own and it ended mostly all over us. I then purchased Exact hand feed formula on Amazon.ca with prime and got it today. I mixed some up and feed with a syringe, he took some, but most ended up on us again. I them mixed it with some no sugar added apple sauce and he ate it all. Right now he is showing good signs of getting better, but I know he has lost weight because I can feel his breast bone easier. I am hoping that this Exact hand feed formula helps him until his beak gets better. We did have to buy a 5lb bag because it was the only one that had prime one day shipping.

Just want some input on other things we can try and did we do the right thing to helping our little bundle of joy, Boomer?

Note: Boomer is our only pet to older child free couple, he's our child. Boomer is very afraid of tablets, smart phones,cameras and just about everything. Don't know why, he just came this way. That is also why his name is Boomer, as in Boomerang, he gets scared and comes right back.

Boomer on my husbands shoulder the second day we had him. 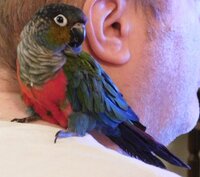 Boomer (aka Boomerang, because he always comes back to you).
R.I.P. OurLittle Angels: Drew

Welcome! I am sorry to hear that he is in pain. It is possible that he is experiencing some nerve pain from the trim. If he is still having pain and trouble eating soft foods, I would call the veterinarian and ask them to prescribe him some oral pain medication to help him. He should not have to be in pain this long.

Some sensitivity is normal for a day or two after a beak trim, but at one year old he should not have needed anything aside from a cosmetic polish. You are doing the things I would be doing if I were in your position But I agree that if he's not resumed to eating he may need pain medications.

Mizzely said:
Some sensitivity is normal for a day or two after a beak trim, but at one year old he should not have needed anything aside from a cosmetic polish. You are doing the things I would be doing if I were in your position But I agree that if he's not resumed to eating he may need pain medications.
Click to expand...

He is now eating the Exact hand formula, without apple sauce, out of a dish by himself. We still put his regular food out for him as he tries it and he is eating his mash now. He has been grooming my ears and I have noticed his beak strength is coming back. He is also getting back to some of his roughhousing by rolling on his back and fighting using his beak and feet on my fingers. He also is getting back into throwing anything that is on a table or counter top on to the floor. But, most of all he enjoys snuggling up against my neck and making cooing and purring sounds.
You must log in or register to reply here.