Id like to preface this by saying the only 'communal' area my parrots share is the playroom. Their cages are positioned so they dont even have to look at eachother, they have a ton of privacy and each have specific play areas catered to their needs where they hang out 90% of the time. All play is supervised.

The Preface-
Right now, I have my little flock of three. A Red Belly Parrot (female) A GCC (idk gender, we assume male), and a cockatiel (male). They all used to be great friends for about a year, the cockatiel is the oldest then the Gcc, then the RBP. When I got RBP she was a baby, and when she hit maturity the cockatiel went absolutely buck wild trying to mate her, it was honestly insane, and she finally snapped one day after being very patient with it for a long time and attempted murder as Pois will do. Tiel is fine as I was right there with them and up on my feet coming towards them before the tussel even started, she only got one bite in on it, nothing broken. This did not deter the tiel. He was a man on a mission and he was in love. I have to keep them separated now because the tiel will absolutely try to do it again and the red belly could definetly kill him if given 1/2 the chance. RBP and GCC get along just fine. they basically social distance from eachother. occasionally steal eachothers toys and food. Occasionally play together. Most that happens is GCC chases RBP off his fav perch. RBP was socially raised with a mixed flock of diffrent species. I know its rare for RBPs not to be agressive/territorial, but honestly the GCC is more aggressive than she is.

The Problem-
One day, far in the future when my GCC passes away, id like to get another bird. It will be female no matter what species. I'd really love to get another Poi, but I worry being such a similar species to the RBP would make her aggressive, but I also wonder if a similar species would make her more inclined to bond with it since they would have similar body language and be able to communicate more effectivley. Thoughts? Im still unsure I will even add to the flock, hopefully this is far off in the future. 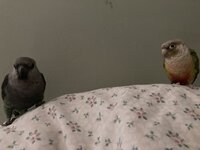 Bump.
You must log in or register to reply here.